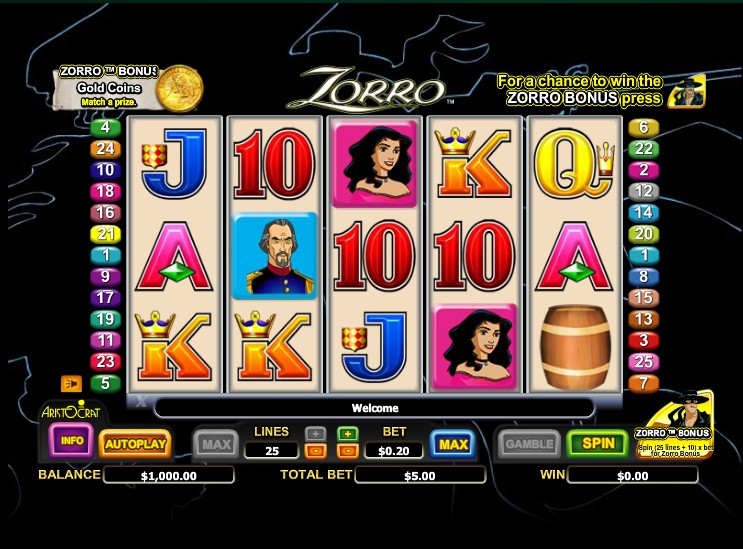 Developed by Aristocrat, a top provider of online casino games, Zorro is a favorite game of many players in Australia and beyond. You will be surprised to find out it is equipped with 5 bonus features, all of which are triggered at random. As you might have guessed, the pokie is inspired by the same-name fictional character who fought injustice somewhere in Spanish California. The story of Zorro was highlighted in numerous TV series, films and comic books, and the masked hero has had a continual presence in the U.S. popular culture for almost a century.

Zorro is a 5-reel pokie featuring 25 paylines and a side bet. The graphics is a bit outdated but many gamblers know that poor graphics do not necessarily make a bad pokie. The set of symbols in the pokie consists of J-A playing cards that award 10 to 300 coins. A pack of themed icons include a red bag of coins (x400), a barrel (x500), Don Diego de la Vega (x1000) and Elena (2000 coins). All combos are considered to be a win when three or more identical symbols align on a payline, beginning with the utmost left reel. A scatter is the only exception because it does not follow the general rule of combo building. If to translate the coin values listed above into real money figures, the top three payouts that the mentioned symbols are able to generate are $10,000, $5000 and $2500.

Bet options and a side bet

The game is compatible with mobile devices and has different user interfaces for its mobile and desktop versions. But you will easily understand how to place a bet playing on your PC or smartphone. The number of lines is an adjustable option and you can reduce their number to 1. Another option is a line bet, which can be modified in the range of $0.01 and $4. That said, the minimum and maximum stakes with a side bet OFF equal $0.25 and $100 per spin.

The side bet is activated if you want to get the chance to play a Zorro bonus feature. The side bet increases your total stake by 10 coins (40 percent of a total stake). If you play with the side bet ON, the min/max acceptable bets are $0.35 and $140 per spin.

Zorro himself is a wild symbol that replaces all non-feature symbols. It has an additional perk that makes him a very useful picture in the gameplay. Zorro creates combinations by itself when two to five line up. When this occurs, you get up to 5000 coins ($20,000), and this is the pokie’s top prize.

The scatter is represented by a black horse. When three, four or five horses land in any position, you receive a special scatter win of x5, x20 or x50 times a total bet, which is equal to $5000 at the maximum stake. Scatters in the pokie do not initiate any special bonus event but they come handy because of their ability to pay out in any position.

When you begin playing the pokie, you will notice some letters appearing on top of other symbols. These letters are Z, O and R, each assigned to a specific reel. In certain situations, the five letters form the word ZORRO spread across the five reels. When this happens, the pokie awards you one of five random features.

This is a simple bonus where you are awarded a random amount of up to x500 times a line bet. In that manner, the maximum cash prize is $2000.

This is a “match to win” type bonus game where you are presented with 15 coins that you are to click until you find two matching values. These values denote your cash prize and it can be up to 500 times a line bet ($2000). Furthermore, the final prize will be increased by a random multiplier of x2 to x10.

You are awarded 3 free spins. During each free spin, Zorro will ride his horse across the screen and transform a random symbol into a flaming letter Z. Each Z letter will be kept in place until the 3 free spins are finished. These feature symbols will act as extra wilds and can lead to decent wins.

On a new screen, you are asked to pick a door that will then open and reveal a character. After that you get 5 free spins. When the character appears on the reels, you need to click it to reveal a hidden cash prize that amounts to 500, 750 and 1000 coins depending on the character (Zorro, Monastario or Juliana).

This is a pure free spin bonus with a pre-selection feature. You are invited to choose a free spin mode that suits you best. There are four options to select from:

The multipliers listed above apply only to wins where the wild symbol substitutes. You need to make a wise choice which kind of risk you would like to have attached to your bonus spins. If you want to obtain some behemoth wins, pick the five-spin option. But if you want a low-risk gameplay, then opt for 15 or 20 bonus spins.

Zorro is a feature-packed pokie from Aristocrat. It has 5 reels, 25 adjustable paylines and the maximum bet of $100 (w/o the side bet) or $140 (w/ the side bet). Since Zorro has 5 random features, it is one of the most interesting pokies in the suite of Aristocrat’s games.