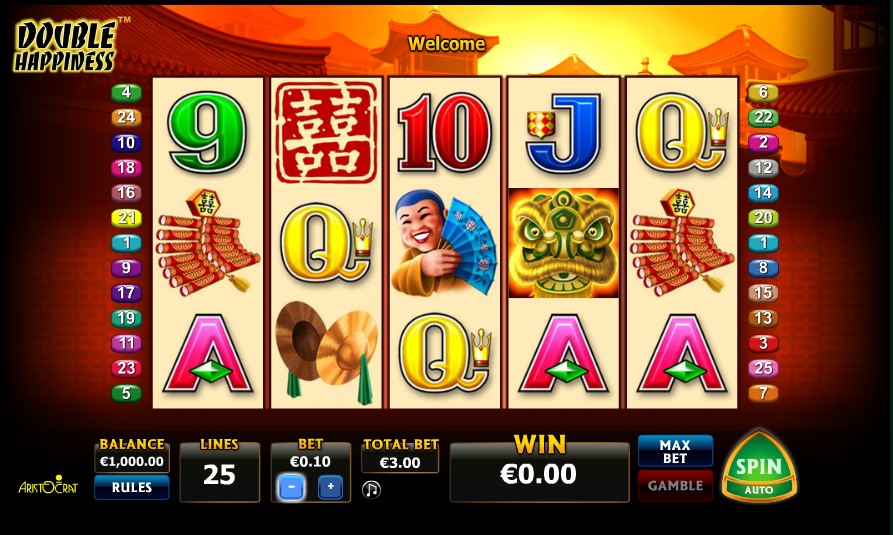 This pokie from Aristocrat lets you take a closer look at Chinese culture, traditions and lifestyle. By using 5 reels and 25 fixed paylines, the pokie developer has rolled out a magnificent game with some very basic and simple but awarding features that many Aussies love so much. One of these popular features are Double Roaming Wilds that appear during free spins and can bring you a multiplier of x10. The pokie is suitable for almost every budget, especially low-rollers who like smaller bets.

The concept of luck and happiness is deeply entrenched in Chinese culture. Local people strongly believe that some hieroglyphs and numbers have a symbolic importance. Some hieroglyphs are considered to be effective in attracting prosperity, abundance, wealth or business success. And if your life desperately needs happiness, wise Chinese encourage you to put the “double happiness” character in your home. The double happiness as used in the pokie is the most important symbol as it triggers free spins with a big winning potential.

In the great scheme of things, the pokie is simple in design and it utilizes the industry’s standard 5×3 layout with fixed betlines. Behind the white-colored reels, you will see a typical Chinese rural landscape with pagoda roofs and distinctive oriental architecture. The user interface is fairly standard and intuitive, so even a first-timer will understand the purpose of each button very quickly. Generally speaking, Double Happiness is a well-balanced pokie that does not stand out from many other five-reel games and has a set of widely used features.

This seems to be the Aristocrat’s policy or some corporate standard to utilize playing card symbols as they are found in every pokie from this software vendor, including the reviewed title. They have not been given an authentic twist to fit the oriental theme, they are generic rather than authentic. Anyway, 9 to A are low-paying pics with the maximum award of 200 coins. Symbols that are located at the upper part of the paytable are more valuable if you manage to get three or more of the same along an active line (to recap, each and every line in the game is always active because there’s no option to deactivate any). The only exception is a smiling Chinese man holding a fan in his hand because it pays out when two of them line up.

These themed symbols include brass cymbals (300 coins), an orange sky lantern (400 coins), firecrackers (500 coins), Chinese drums (750 coins) and a Chinese man (1000 coins). The listed coin values are bestowed upon you when five related symbols appear on a betline. A real money amount depends on how much you have wagered on each line.

The only changeable option is titled “Bet” on the user interface. It actually means a real money sum to be wagered per line and it ranges between $0.01 and $4, therefore, the total bet can be almost anywhere between $0.25 and $120 per spin. Now you can easily calculate the maximum prizes assigned for each combination. For example, the top three payers in the pokie are Chinese men, drums and firecrackers, which confer up to $4000, $3000 and $2000, accordingly. There is only wild symbol that pays out much higher than these, and this is a wild symbol.

A golden dragon mask is a substitution symbol and a welcome visitor on the field. It performs two functions: first, it takes part in combinations of other symbols by substituting the missing ones, and second, it completes payline wins by itself when two or more are hit on a betline from left to right. The highest payout for the golden mask is 2500 coins or $10,000, once five of them land.

Free spins are cherished by every player because they come at no cost. When they finally end, players normally find their balance increased significantly as a result of free spin wins. To enter this special feature, you need to hit three, four or five Double Happiness hieroglyphs in any position, at which point you receive 10, 15 or 25 spins. During free spins, you will see two roaming wilds on the screen. They stop in different positions, but each moves to the left, right, up or down, with the direction being randomly chosen by the pokie. If they happen to converge in one and the same position, players will get a prize equalling 10 times a total bet. Roaming wilds substitute for other symbols in addition to the normal golden dragon wild, and their being “roaming” acts as a nice complement to their ability to substitute.

As most Aristocrat solutions, this one has a gamble feature. The Gamble button in the UI remains faded after a non-winning spin. In case of a win in normal gameplay, the button becomes clickable. This is not a mandatory game stage; if you want to carry on spinning as usual, just ignore clicking it. In case you want to try your luck and win more, then click it. On a new screen, you are asked to guess a card color/suit and increase your gambled amount by x2 or x4, if successful.

Double Happiness is a 5-reel 25-payline pokie with the maximum jackpot of $10,000 coins. The game features a wild, scatter, free spins and an enticing Roaming Wild bonus that activates in free spins only.