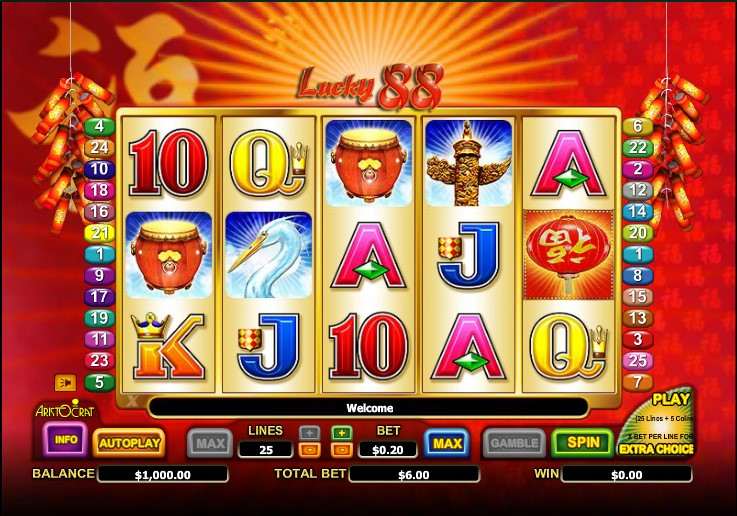 For many Europeans, a number is not loaded with any additional layer of meaning, except for the unlucky number 13, but this is rather an exception. In China, the situation around numbers is dramatically different and each number (at least 1 to 10) bears a strong extra-linguistic burden. For example, number 4 is unlucky because it sounds similar to another word that denotes “death”. In the center of the pokie is number 8, which is believed the luckiest number of all as it sounds like a Chinese hieroglyph that stands for wealth and fortune. Along with wilds and scatters, the pokie features a bonus selection feature that gives two options: free spins or a unique dice game with big cash rewards.

This is a 5-reel 25-payline pokie with a luck-related set of symbols. Along with themed imagery, standard card values are also utilized. Hitting 3+ nines to aces pays out up to 68 coins. The other five symbols reflect the pokie’s theme and many payouts displayed in the paytable have number 8 in them. The medium- and high-paying pictures are Red Drum (78 coins), Pagoda (78 coins), Golden Tower (88 coins), Heron (88 coins) and Golden Lion Statue (88 coins). As you can see, the vendor stays loyal to the number in question. The coin values shown above are awarded for five of a kind.

Betting options and a side bet

A player has two wagering options to configure. The first is the number of lines that can be decreased down to 1. The second option is a line bet which varies between $0.01 and $4, so the min/max limits in the game are $0.25/$100. That said, the pokie has a side bet that takes 5 coins from your balance when active. It’s up to you whether to pay more for each spin but a side bet, if paid, enables the player to enjoy a bonus selection feature that would otherwise be unavailable. If you play at the minimum one-penny stake, the total bet would be $0.30 per spin, with the optional side bet ON. If you play at max, then the side bet would deduce $20 from your balance and thus the total spin bet would be $120.

A Chinese man is a wild symbol that takes part in other symbol’s combinations, helping them in completing wins. Besides, the wild also forms winning combos itself when 2 or more land on a payline. The awards for Chinese Men are 8 to 888 coins (up to $3552). And as if that were not enough, the wilds feature a random multiplier. Whenever a combination, where a wild is involved, is created, firecrackers at the top right corner of the reels begin to explode and produce a multiplier of x2 to x88. Multipliers of x2, x3 and x5 are most frequent but when you see x38 or x88, you will be overwhelmed with joy.

If you opt out of the side bet, free spins will be the only outcome when three or more scatters land in any position. Scatters in the pokie are represented by a red lantern that counts in any place, regardless of whether on a payline or not. What’s more you also get an instant win of up to x188 times your total bet for any number of 2 to 5 scatters. Consequently, scatters happen to be the most fruitful pictures in the pokie, which award the maximum of $22,560. You are offered to select any of the three options:

If you play with the side bet enabled, you pay five coins more but this inconvenience is fully justified because three or more scatters, when landed, offer you a feature selection. The first option is to play free spins and choose one of four modes listed below. The second option is to launch a bonus Dice game where you have every chance of scooping a large profit.

This bonus choice is for those who like risky gameplay. The bonus game, if selected, can bring you up to $54440. On the second screen, you will see a 3×3 grid consisting of dice (the central dice is temporarily inactive). The aim of the bonus is to collect as more 8s as possible. The dice with “8” is fixed in place and the remaining dice are thrown again. Upon the completion of three tries, a piece at the center of the grid may award you three extra games with a chance of 1 to 6. For one “8” you receive 240 coins, two 8s will see you enjoy 440 coins. Without getting into details, the more 8s are collected as a result of the bonus round, the higher the award.

At the bottom right corner, you will see a green Gamble button that is normally greyed out in a normal gameplay but gets highlighted after you have a win. By clicking it, you enter a traditional gamble feature with Red/Black and 4 suits as guessing options. A correct answer will multiply your original gambled amount by x2 or x4.

Lucky 88 is devoted to Aristocrat’s favorite Asian theme and features many fascinating bonuses such as a wild with juicy multipliers, a scatter, numerous free spin scenarios and a Dice bonus game with monumental rewards.