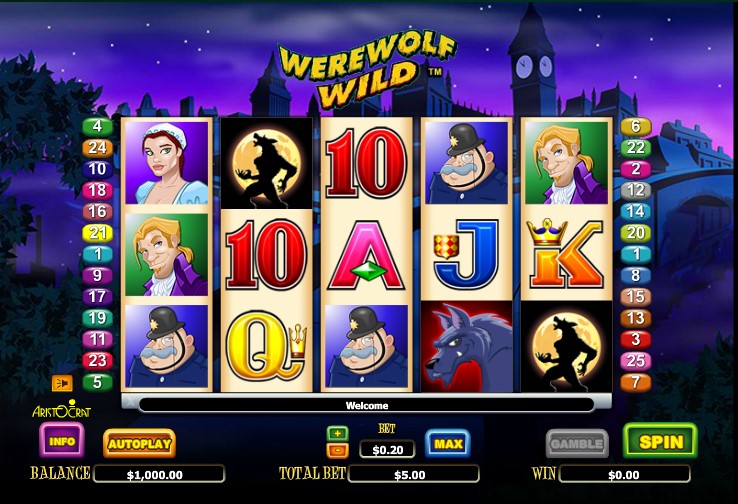 If you are afraid of horror films and avoid reading Stephen King’s novels, this 5-reel 25-payline pokie is not for you, because the five reels of the game are populated by a hungry werewolf who transforms into an evil beast when the full moon rises. Everyone in the city feels vulnerable, including policemen when the werewolf goes manhunting on the moonlit streets of the big city where the pokie’s action takes place. Feature-wise, the pokie is nearly perfect. Unlike around 99% of all pokies from Aristocrat, the reviewed game has a plethora of bonuses such as the Werewolf’s Touch bonus, Contagious wilds, Mystery coin feature and some other unexpected bonuses that you’d better discover by yourself while playing the pokie.

Werewolf Wild differs favorably from many other pokies ever developed by the famous Australian maker. The first distinction is that it features a horror theme, while many of Aristocrat’s games have Asian motifs. The second important distinction is that it has many unique features to be described further in detail in this review. The graphics in the game are on par with the best creations of industry leaders like Betsoft or NetEnt, mainly due to the fact Werewolf Wild was developed some years ago, unlike most of its pokies that date back to 2000s.

Disappointingly, Aristocrat persists its practice to use the infamous package of playing card symbols. This may even disappoint you, because the developers’ team hardly lacks creative ideas and could have come up with something more ingenious than a set of typical letters and values associated with playing cards. Anyway, 10s and other cards up to A’s are low-payers in the game, as you might have guessed, with the winning range being between 5 and 125 coins for five of the same.

Other symbols are designed in a way to make a cohesive storyline about a werewolf whose hunting lands are the entire city. Pole Lantern ($500 at max) and Carriage ($600) symbols are a kind of stage settings that create atmosphere of a big rich city at the end of the 19th century. A grinning moustached policeman awards 400 coins if five land on a payline. A frightened maiden is going to grant you $1000, and a young heartthrob with cunning eyes will also give you $1000. These are normal symbols, i.e. pictures that do not have any special features attached. Their role is to award you paytable wins if three (or greater) matching pictures land on a payline left to right.

The lines are permanently enabled and players cannot reduce their number. The only available option is a line bet that can vary between $0.01 and $2. This said, a total bet ranges between $0.25 and $50 per spin.

The werewolf himself, looking at you with an evil grin, is a wild symbol. It has all the typical properties that are peculiar to a generic wild: it substitutes for all non-feature symbols and also creates its own winning combinations. Two wilds generate a 2-coin award, and if 3, 4 or 5 wilds land on a payline you will receive a very big cash prize up to 1000 coins ($2000).

A gold coin is in a league of its own because it appears on the first reel only and has no money value on its own. In some cases, it is a shallow symbol, meaning you would get nothing if it lands. But in other cases, it will give you a random prize of 2, 3, 4, 5, 10, 20 or 40 times your total bet. To make it happen, the coin must be accompanied by a werewolf (wild) anywhere on the screen. To sum up, the coin + werewolf will make you a very happy guy.

This is a random feature. When the reels are spinning, a blood-curdling werewolf may walk in front of the reel set and deliver a crushing blow at one to five random symbols, morphing it (them) into his fellow creatures, werewolves. So one or more random symbols will become wild.

A howling werewolf who is standing full size against the full moon acts as a scatter. You might already know that a qualifying number of scatters pays out in any position. As for this pokie, you need to see at least three scatters to get paid your total bet doubled. Four and five scatters pay out x10 and x50 times your total bet, which means the highest possible loot for this combo is $2500, which is not bad for a scatter win.

And here comes the centerpiece of the pokie. This feature is the most picturesque as well as profitable. To enjoy the feature, three or more scatters need to appear first, at which point you get an instant money reward (see above) and then 7, 14 or 28 free spins, depending on the number of scatters landed. Each wild (to recap, this is a werewolf) that lands on the screen adjacently to a human symbol (policeman, maiden and heartthrob) bites that man or woman, infects him or her, and they immediately transform into a contagious werewolf. This further means that the “infected” ex-human can also “infect” a human symbol that is located next to it, in a kind of chain reaction. Use your imagination and visualize what might happen if at least one contagious werewolf occurs on the reels. Big wins are inevitable, indeed, especially if 28 free spins are played!

The pokie is a true masterpiece of Aristocrat’s library because it features an attractive theme inspired by werewolf stories and legends, Contagious Wilds, up to 28 free spins, and a few other features that make the gameplay extremely exciting and fun.