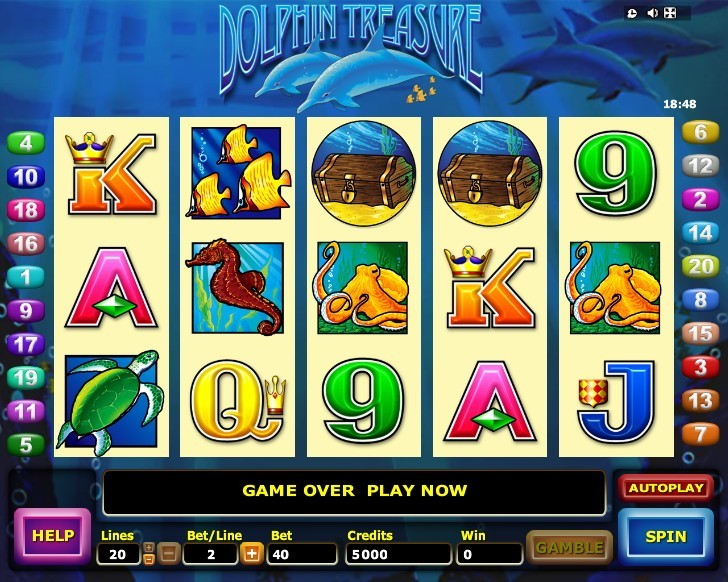 As many other pokies from this maker, Dolphin Treasure was first released as a physical machine for land-based casinos and it is actually one of Aristocrat’s first slot machines to have been redesigned for digital gaming. As such, the game is very simple and easy to play, since it has very few features – just a wild, a scatter and basic free spins. Players who love penny pokies will be satisfied with bet options in Dolphin Treasure since they can play at $0.20 per spin.

The game takes you to the underwater world, which is home for dolphins, seahorses and other creatures. The pokie was designed more than 10 years ago, this is precisely why its visual appearance is many miles away from modern standards. Anyway, some pokie fans believe that artwork is not the major factor when it comes to deciding which pokie to play and the game reviewed here will strike a chord with that category of gaming audience.

With relation to characteristics, the pokie has 5 reels, 3 rows and 20 adjustable paylines. At the background, there is lucid blue ocean and a small flock of playful dolphins frolicking just a few feet under the surface of the water. On both sides of the reel columns, you can see numbers indicating specific paylines. In general, the game design is common to the pokies of the beginning of 2010s. Pseudo-3D buttons under the reels is a nice element imitating real-life slot machines with their raised-up physical buttons that gamers push to perform some gaming actions.

As is said above, the paylines in the game are adjustable but you cannot choose absolutely every number of lines between 1 and 20. There are five buttons in the user interface which are meant to be used for line selection and these buttons allow for activating 1, 5, 10, 15 or 20 lines. Other controls are Max Bet (for placing the highest possible bet for the selected number of lines) and Bet One (for increasing the number of credits per line). By manipulating all the available bet values, you can place as low as a penny and have a single line enabled, and as high as $20 per spin. To summarize, bet options are a bit unusual by modern standards but can meet all your needs in betting.

Half of the pictures are devoted to sea life, while the other half are generic card values from 9 through Ace. Combinations that generate money rewards are created in a traditional way. Three (in some rare cases, two) like symbols must be visible on a line that you have activated before the winning spin. There are also some irregular, feature symbols, which pay out based on a special set of rules – they will be described below, in the next sections. The regular symbols and their related payouts are yellow fish (250 coins), octopus (250 coins), starfish (400), sea horse (750 coins) and turtle (750 coins). Since the maximum bet per line is $1, you should multiply it by the figure in brackets to calculate the maximum return for each specific combination. By doing this, you will see that the top winning is $750. This is true for regular symbols only; bonus symbols pay way higher.

The first bonus symbol is a wild represented by sunset at the sea. It gives you three perks when appearing in view:

A treasure chest is a scatter. Its distinction from regular symbols is its ability to pay out without having to land in a particular predetermined pattern. Scatter payouts begin when at least two of them fall on the screen. The highest possible prize is furnished when five scatters land, at which point you will instantly see your balance added with your total bet multiplied by 400 ($8000 at max).

Three scatters gathered in any position on the reels unlock a bonus round with 15 free spins. Each free spin starts automatically one after another without your clicking the Spin button. During the bonus feature, all combinations that qualify to be a win are evaluated at three times their normal value. Just imagine hitting five wilds during free spins and how much you get for that super profitable combo!

If you feel like trying to win more money after you have already received some on the last spin, you may click Gamble. On a new screen, you will be prompted to pick one of six options that describe a face-down playing card: Red, Black, and 4 suits. The card then flips face up. If you prediction was correct, your win in the last regular game will be increased by x2 or x4.

Dolphin Treasure is a 5-reel 20-payline pokie from Aristocrat. It features an ordinary design and basic features such as a wild, scatter pays and 15 retriggerable free spins at x3. The game is compatible with mobile devices.