Queen of the Nile 2 Pokie

Play Queen of the Nile 2 Pokie for free 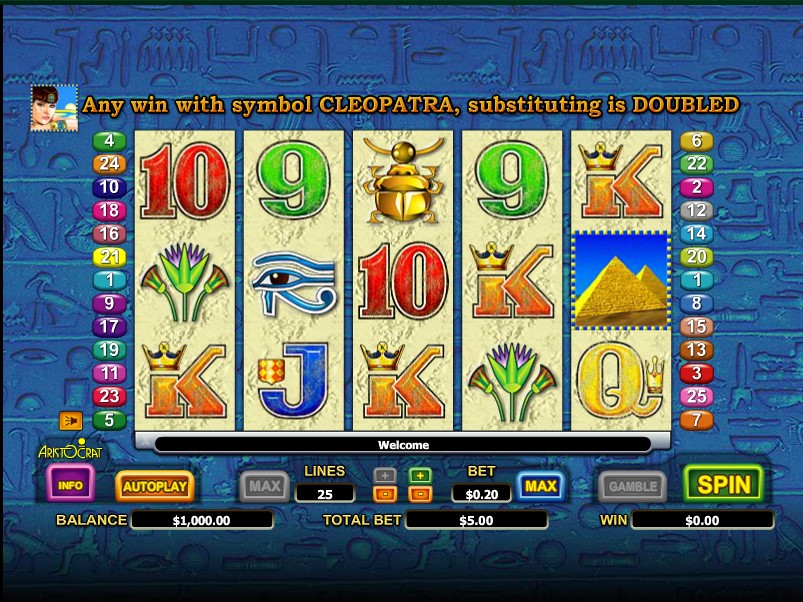 Queen of the Nile 2 Pokie Review

Queen of the Nile 2 is an updated edition of the first pokie version known as Queen of the Nile. The new game has become a way more attractive for Aussies because of a unique free spin feature with four bonus options. The game was released back in 2003 and its design looks a bit dated; but it still offers solid gameplay and very good wins to everyone who plays for real money. Queen of the Nile 2 is a low-volatile pokie for gamblers who like long winning streaks.

The pokie reviewed here is centered around an Egyptian theme, which is loved by players around the world. As the game was developed about 15 years ago, its graphics are plain and typical for those times. The picture used as background for the reels depicts Egyptian patterns that are found on pyramids and excavation sites. The 5×3 reel layout features 25 adjustable paylines, the number of which is changed down to the minimum of 1. Awards are granted when three or more regular symbols line up from left to right.

Regular symbols in Queen of the Nile 2

Symbols that are found in the pokie are of two categories. The first set of symbols consists of nines, tens, jacks, queens, kings and aces. As other games from Aristocrat, these pictures are of low value with rewards ranging between 2 and 125 coins. In some cases, playing cards produce a win that is lower than a total bet. For example, three 10s grant five coins, while a total bet is 25 coins. That said, there are chances that any single spin ends up with multiply combinations at a time and you get a decent win.

Other pictures are more valuable, and they belong to an Egyptian theme. Flowers pay out 250 coins for five of a kind, and the same prize is granted for five Eyes of Ra. Five golden scarabs add 400 coins to your account, and five golden rings will make you richer by 750 coins. A pharaoh’s mask is also a very profitable icon because it pays 750 coins when five of these land on a payline.

To select a bet size, players can click the “+” or “-” buttons in the “Bet” section to change a line bet between a penny and $2. Given that the pokie has 25 paylines, a bet is configurable between $0.25 and $50 per spin. With this in mind, the maximum payout for non-feature symbols is $1500. Moreover, the pokie has two feature icons that pay out much higher than other icons. Autoplay settings are available for gamblers who want to relax and watch the reels spinning by themselves without clicking the Spin button all the time.

The wild card is represented by Cleopatra. It has three unrivaled advantages as compared with other pics:

A pyramid is a special symbol in how it forms winning combos. Contrary to regular symbols that should be on a payline, pyramids factor into a combination if placed in any position. Another crucial difference of scatters from other symbols is that a scatter reward is determined by multiplying a paytable value by a total bet, instead of a line bet, as the case is for other symbols. Actually, scatter wins range between $0.50 and $5000, depending on your current bet size.

Hitting three scatters gives you entry to a free spin selection feature. On a new screen, you will be presented with four pyramids. You are asked to pick the one that suits your preferences best. The four choices are:

You should think whether you would like more spins or more multipliers. For some, it is better to hope for one huge win in 5. Others prefer to spread the risk over 20 low winnings. If you want to win regularly even if it is lower prizes, choose a middle option of 10 or 15 free spins.

The pokie has a gamble feature that allows for boosting your last win by x2 or x4. To start the feature, you need to click the Gamble button after a win in a normal game (not free spins). On a new screen, you are to try to guess a color (red/black) or suit of a card. In case of a correct choice, your win will be quadrupled or doubled. If you fail, the original winnings are lost.

Bottom line on Queen of the Nile 2

This 5-reel 25-payline pokie has a wild symbol, scatter and free spins with a selectable number of spins and multipliers. The highest jackpot prize reaches $60,000. The pokie, by all odds, classifies as a low-volatile game in which players are frequently awarded with smaller payouts.