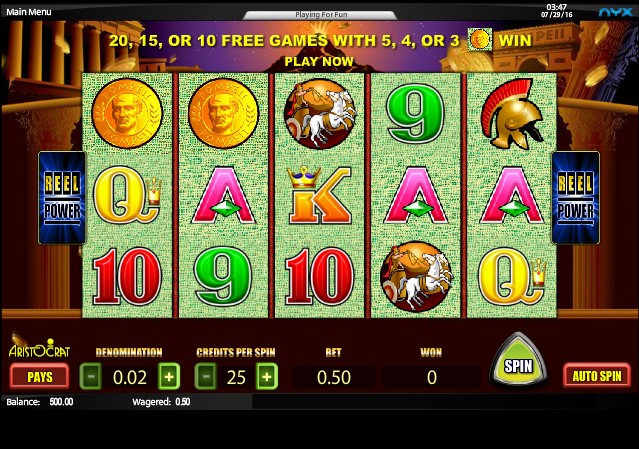 In 79 AD, a vibrant town of Pompeii was devastated by the eruption of Vesuvius, on the south of Italy. This catastrophic disaster was given a memorable description in hundreds of works of art. While the reviewed pokie is less popular than, say, The Last Day of Pompeii painted by a Russian painter Bryullov, it is still a desirable game for many Aussies thanks to its free spins galore. The pokie has a powerful wild multiplier of up to x15 and it can stir up your winning potential in no small way.

How the town looked like before being ruined to ashes was unknown before the 19th century when the first excavations were organized. On the background picture of the pokie, there is a view of the doomed city with magnificent buildings and Vesuvius towering above – this is, of course, an artistic representation of the fallen town because no real pictures of Pompeii have survived to this day. Feature-wise, the pokie is rather basic. Its overall appearance, design and other elements are common for all pokies of this provider.

The pokie utilizes a well-known system known as Reel Power or 243 ways to win. It differs dramatically from games that have a fixed number of paylines used as a basis for symbol combinations. In Reel Power pokies, like the reviewed one, winning combinations are formed when three, four or five identical pictures occur on neighboring reels starting from the leftmost reel. The position of the involved symbols on the reels is taken out of equation – they can be in the center, at the top or bottom of a reel. The most important thing is they appear on adjacent columns. In general, this principle extends the number of probable combinations up to 243.

The wintable consists of ten regular symbols and two special ones. The former are further divided into playing cards and themed icons. The 9 to A cards are on the lower side because they award as low as 5 to 200 coins. Chariots and Roman swords pay out 1000 coins for five of a kind. A Roman helmet pays bigger, at 2000 for five, while a red and gold logo pays out 2500 coins, which is the pokie’s highest prize. As you can clearly see, the coin awards are pretty big, so you can expect truly magnificent experience when playing Pompeii for real money.

Since no paylines are available, the minimum bet cannot be less than 25 credits. And this amount is wagered on the entire field. The maximum number of credits can be adjusted up to 250. The second configurable value is a credit denomination and it ranges between $0.01 and $0.50. With this, the total bet can be as low as $0.25 and as high as $125 per round.

Now that you are aware of bet sizes, you can easily calculate the biggest potential prizes in real money. The top three regular awards are $12,500 (five logos), $10,000 (five helmets) and $5000 (five chariots or swords).

Mount Vesuvius is a wild icon that may stand for other symbols. The wild here has very limited capabilities because it falls on the second and fourth reels only. The mount cannot form combos by its own because it fails to appear across the entire reel set.

The scatter symbol is depicted by a golden coin. Contrary to regular symbols that need to stop anywhere on adjacent reels, scatters count toward a profit-generating combination when they land in absolutely any place. Three, four or five of these special symbols award 125, 500 and 1250 coins, respectively. In real money terms, the max scatter prize is $6250.

Three or more scatters initiate 10, 15 or 20 free spins, alongside an instant cash present that was mentioned above. During the feature, each wild symbol carries a multiplier and its value depends on the reels it has landed. Any wild being part of a combination on the second reel multiplies a win by x3. If a wild takes part in a combo on the fourth reel, it multiplies payout by x5. If both wilds occur in the same regular combination, the payout will be increased by a hefty x15. The bonus feature can be won again if 3+ scatters land.