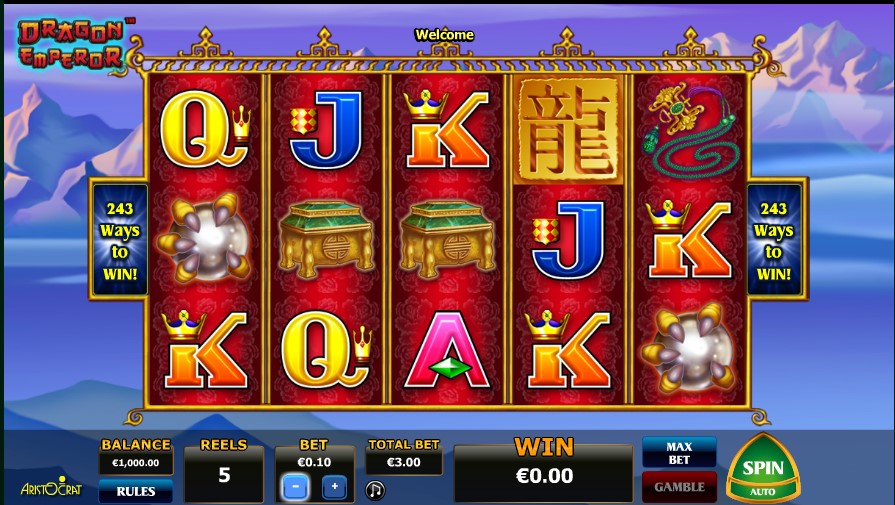 Aristocrat has released many Asian-themed games where symbols, reel decorations and other graphical elements are strongly connected to the Asian culture in general or to some particular country. Dragon Emperor is one of these pokies with a distinct oriental twist. The appearance is backed by a few bonus features like wilds, scatters and free spins. Besides, the game has a very rare bonus feature known as Shuffling Reels. The pokie was well-received by gamblers in Australia and other countries due to its simplicity and low-volatility gameplay that provides many small wins on almost every pokie round.

The symbols are placed on a velvet-like lining of the reels, with golden frames and intricate architectural pieces around them. On the background you will see a beautiful mountain scenery with clouds and mountain tops. All of these reflects tranquility, piece of mind and wisdom, which are so common in Asian culture. On the whole, it is worth mentioning that the pokie is fairly straightforward and it does not stand out from many other 5-reel pokies. But its clear advantages are frequent wins, focus on an Asian theme and betting flexibility.

The pokie is based on a famous 243-ways system where you need to hit matching symbols on adjacent reels, no matter their place on these reels. The most important thing is that they would be on adjacent reels. Pokies designed with this model in mind, tend to be low volatile, meaning many wins are supposed to come on each spin.

Most symbols deal with Asian motifs, except for Jacks, Queens, Kings and Aces that have a standard “one-size-fits-all” design. The said card symbols pay out 5 to 150 coins for five of a kind. Themes pictures are more generous; their payouts are 350 coins (a lace with pendant), 500 coins (a treasure chest), 800 coins (a dragon’s claw gripping a pearl) and 1000 coins (a wiseman). The values given in brackets show your award for five of a kind. There is only one symbol (scatter) that pays you more than five wisemen, and it will be reviewed in a section below.

The pokie has one adjustable option, named “Bet”. By clicking plus or minus buttons near the Bet indicator, you increase or lower down your bet, which must be then multiplied by x30 to calculate the total bet per spin. Although the pokie has a no-payline system, imagine there are 30 paylines and that the “Bet” option means a line stake. This value is changed between $0.01 and $1, so the maximum stake will be $30 per spin. Taking into consideration the top bet sizes that are available here, you can see the highest jackpot prizes are $1000, $800 and $500. Don’t get frustrated over low jackpot prizes! Dragon Emperor is categorized as a low-volatile game so you can expect multiple low wins on any spin.

The wild is represented by a dragon’s head and it does not take center stage in normal gameplay. Actually, it does substitute for other symbols but its location is limited to the fifth reel only. Since all other reels are restricted for this symbol to appear, it is of somewhat little use in normal game until you get entrance into free spins where the dragon’s head becomes the pokie’s highlight.

Free spins are unlocked when three, or greater, scatter symbols land left to right on the reel set. Scatters in the pokie are represented by a Chinese hieroglyph. When you do get access to the bonus, you obtain 7, 10 or 15 games that come at no cost for you. You would just sit comfortably and watch the reels spinning automatically without any deductions from your coin balance. Free games are retriggerable, consequently, you can extend fun by getting 3+ scatters again during the bonus feature. Before the feature gets underway, you instantly receive a scatter reward. The maximum scatter win is 40 times a total bet ($1200 playing at max) for five hieroglyphs. If 3 or 4 scatters trigger the bonus game, you get your total bet times x2 or x10, respectively.

As you might know, having wilds on reel 5 rarely leads to wins either big or small. The closer wild symbols are located to the left edge of the reel set, the higher chances of hitting a reward. With this in view, the pokie proudly presents a Reel Shuffle feature that activates when three wild dragons land on the fifth reel. When this happens, all reels randomly swap over with the chance of getting the wild reel on any other place, rather than reel 5.

Dragon Emperor has a standard gamble feature with a card guessing mini game. If successful, you increase your winnings by two or four times. Otherwise, you lose your entire winning received in the preceding main game.

Dragon Emperor is a 5-reel video pokie with 243 ways to win. Features include a wild, scatters, free spins and Shuffling Reels. Recommended for a wide category of gamblers who like Asian-themed pokies and basic gameplay.