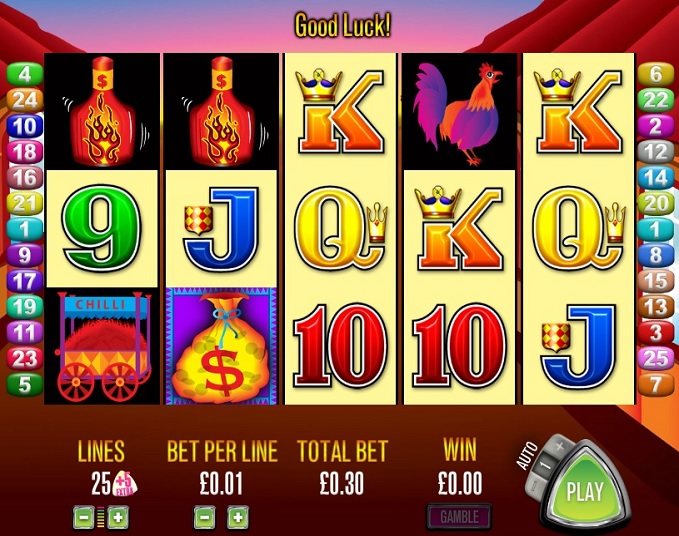 This Mexican-themed pokie from Aristocrat is going to make your wins as spicy as chilli. The five reels of the game are full of sizzling heat and true Mexican flavor and whenever you win some coins, you will have a desire to make a vacation, fly to that country and feel the special atmosphere of Mexico, which is so brilliantly reflected in the More Chilli pokie. At first thought, the game is generic and nothing exceptional. But giving it a closer look, you will be surprised to see it has stunning free spins with a unique multi reel feature.

Actually, the multi reel feature as used in the pokie is quite unusual for today, but it is not a unique solution. However, around 10 years ago More Chilli was the first video pokie to introduce this concept to the public. Imagine a computer screen split into four equal parts and each part rooms a five-reel pokie. When you click the spin button, all the four mini pokies begin spinning simultaneously but generate different outcomes when they stop. The result of spinning of the 4 mini pokies is equivalent to getting 1 regular pokie spun four times. In More Chilli, this feature is implemented in free spins to be reviewed below.

Design and symbols in More Chilli

The set of reels has a standard appearance and so does the user interface. The background picture depicts something that resembles sandy hills. Aristocrat continues sticking to its practice of using playing card symbols and the reviewed pokie got six of them: nines, tens, jacks, queens, kings and aces. All of them do not pay out much – hitting three to five of a kind awards 5 to 500 coins.

The remaining symbols are associated with the Mexican theme and the idea of heat: Sun (700 coins), Rooster (800 coins), Cart with Chilli Peppers (900 coins), Bottle of Chilli Ketchup (1000 coins) and Chihuahua (1500 coins). Figures in brackets indicate a prize for five identical symbols. Factoring the max coin value, the top three jackpots that are awarded for regular symbol combinations are $3000, $2000 and $1600.

The pokie features 20 paylines in normal gameplay. If you want to add fun and increase return by 5%, consider clicking a “+5 Extra” triangle next to the Lines indicator. By doing this, you add five more lines to the game field and your total bet will grow by 5 coins automatically. A coin denomination is changed between $0.01 and $2.5, thus a total spin bet ranges between $0.20 and $50 without a side bet activated. If you play at min, the side bet will take $0.05 from your balance on each spin. If you play at max, be ready to pay $10 more for the side bet. With this background, the pokie accepts up to $60 per spin, with the side bet enabled.

A smiling man with sombrero is a wild symbol. It performs its usual functions including substitution of regular symbols in a combination. Alongside with this, two or more wilds collected on an active line bring you 25, 75, 500 or 2000 coins. If you play for real money and place the highest bet possible, the five-wild combo will grant you $4000 coins.

You will certainly like free spins in this pokie and be eagerly waiting for them again and again because the bonus mode differs dramatically from regular gameplay. To find yourself entering the bonus, you first need to get three scattered Money Bags in any position. Besides, a tremendous upside to the feature is that it can start at any time after a normal spin without the help of scatter symbols. You receive an instant bonus amount of your total bet multiplied by x2, and then 12 free games begin. Note that placing a 5-coin ante bet extends the bonus session by 3 spins, to 15 in total.

Once the feature is activated, the gaming screen is divided into two parts, each featuring a set of five reels. Besides, a Chilli Meter appears on the screen to count the number of chilli symbols. During each free spin, the two reel sets spin at the same time, thus giving you twice as many chances to hit an expensive combo. Chilli is a new symbol that is added to the reels. It brings no wins by itself but each one adds to the counter.

When 9 chilli peppers are accumulated, the third set of reels appears and reel 5 turns fully into wild. When 14 chilli peppers are shown on the counter, you will play four reel sets simultaneously and reels 4 and 5 become wild. Collection of 30 chilli peppers makes the central reel filled with the Wild Mexican Man. As you will appreciate, free spins are an extremely beneficial part of the game and you can end up with thousands of coins added to your money balance.

After a spin that resulted in a win you can proceed as normal or enter a gamble feature. In the gamble mode, the money earned in the previous spin is gambled with three possible outcomes: you multiply it by x2, multiply it by x4 or lose everything. The way the mode runs is fairly standard. You are to guess correctly a card color or suit.

The pokie stands out favorably thanks to its multi reel free spin feature where you get to enjoy 2, 3 or 4 independent reel sets. Presence of a five-coin side bet expands gameplay possibilities and your opportunities to score big.