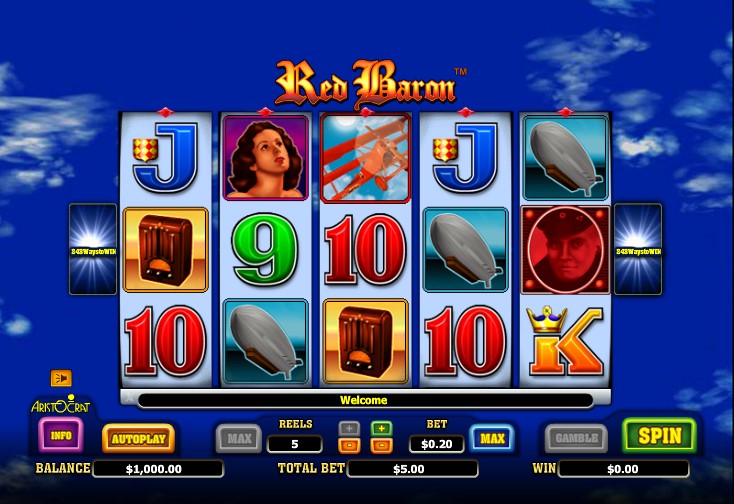 This is a 5-reel 243-ways pokie based on a real-life personage who was a legendary top-scoring pilot in the WWI. Aristocrat’s pokies are usually simple and have few bonus features as compared with modern games. Surprisingly, Red Baron outmatches many of its rivals in regards to bonuses. In free spins, you get a unique Mission bonus that can result in a big win multiplier of x140. Another stunning thing to point out is a wild symbol, which substitutes for every symbol without exception.

The game revolves around Manfred von Richthofen, who was the best WWI flying ace with over 80 confirmed victories. His brightly colored pink triplane (an airplane with three wings) cast terror in the hearts of his enemies because he used to come out victorious from every air battle. Playing the pokie, you feel like being in the cockpit and scanning the horizon in search of hostile airplanes. Though the pokie’s design is very far from today’s titles with mind-blowing animations and cool 3d symbols, the pokie will impress you with its innovative bonus features. So if you play for the sake of pure fun and entertainment, then the game is definitely worth a try.

The pokie features Aristocrat’s trademark Reel Power engine, which is also known as 243 ways to win. The major property of this revolutionary solution is that a player has an option to deselect one or more reels. It works as follows: the pokie is played over 5 reels by default and has 243 possible winning combination. If, for some reason, a player believes he can achieve better winning results with only four reels, he can deactivate reel 5, play on the remaining four reels and enjoy 81 potential combinations. Similarly, if a player wants to switch off two reels, he will play on reels 1, 2 and 3 only (the count begins from the utmost left reel) and have 27 possible combinations. This remarkable flexibility enables everyone to try new betting strategies, ride winning streaks and make the most out of the pokie.

Symbols and payouts in Red Baron

Aristocrat’s usual symbols adopted from playing cards are represented in the pokie in addition to themed symbols. The 9 to K pictures pay out 10 to 150 coins for 3, 4 or 5 of a kind. Other non-feature symbols are associated with Red Baron in one way or another. These include a radio station (200 coins), Red Baron’s pet dog named Moritz (250 coins), a zeppelin (400 coins), a woman gazing into the skies (1000 coins), an all-red triplane (1500 coins) and Manfred himself (1500 coins).

If you play at the maximum acceptable stake, you can expect to get the following top three prizes for five of a kind: $6000 (Red Baron or airplane), $4000 (women) and $1600 (zeppelins). The highest your stake per spin, the higher your prize. Playing the entire reel set (without deselecting any reel) gives the most favorable “return to player” value.

A spin bet depends on two configurable settings: the number of reels in play and a base bet. The latter starts at $0.01 per spin and reaches $4. The pokie has no paylines, that is why a total bet is calculated in a different way than it is in payline-based pokies. In Red Baron, a base bet is multiplied by x25 to determine the total bet, therefore, a player can wager any amount from $0.25 to $100 per spin. Note that reducing the number of reels to 4 (and lower) affects a bet size.

A German military award in the shape of a cross is a wild symbol. The medal can land on the central reel only and it substitutes for all symbols, including scatters. This is, by the way, a very rare occurrence that a wild is able to replace for every picture without exceptions. But there is another advantage to the wild symbol. When it takes part in a winning combo, the resulting normal win is multiplied by a random value of x2, x3 or x5.

Be all eyes to see targets on the second, third and fourth reels because they will trigger a captivating Mission feature. Upon completion of the Mission feature, you proceed to free spins automatically. When the bonus begins, you are asked to pick 1 out of 5 missions, which are your estimates of how many Airplane symbols would appear on the reels for the entire duration of free spins. If your guesstimate is correct, you will have your entire free spin winnings multiplied by a related multiplier at the end of free spins. The five mission options are:

After you have chosen a mission, 15 free spins begin. At the end of the feature, you have a chance to get the winnings increased by a certain multiplier, provided the mission’s aim has been achieved (see above for detail).

Red Baron is a 5-reel pokie with a variable number of reels and 243 ways to win. The game has a wild multiplier, free spins and a profit-generating Mission bonus that can lead to huge wins. The min/max bets in the pokie are $0.25/$100 per spin.