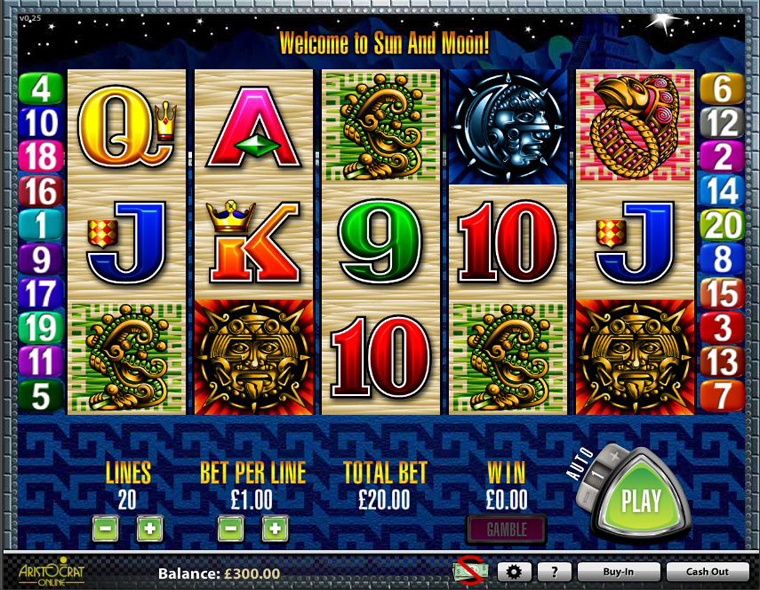 In this fantastic pokie from Aristocrat, Sun and Moon complement each other like yin and yang. The Moon is a wild symbol, and so is the Sun. The Moon pays out 1000 coins, and so does the Sun. The pokie stands out from other pokies from this developer because of some unique features that are rarely met in other titles. Here in the pokie, free spins are won easier than in other games thanks to the interchangeable Sun and Moon symbols, and this is really great! Aussies with small budgets are especially welcome to play the pokie, as the minimum bet is a mere 20 cents.

Design-wise, it is not an exaggeration to say that the pokie is somewhat outdated. Actually, this is Aristocrat’s basket case. But if you are here to entertain yourself and all design considerations are immaterial for you, then you will certainly love this pokie, because its features are truly interesting and worthwhile your time. The five reels, which are arranged in a standard number of three rows, are placed against a dark mountainous ambience, and symbols themselves lack refinery and sophistication. The package of symbols includes notorious playing cards from 9 through to A. They have no special design that would fit the sun and moon theme. Anyway, they will make your bankroll ticking up and down in anticipation of bigger wins.

Those bigger wins are brought to you by dint of themed symbols, all of which are related to decorations, tribal items or local embellishments of native Americans. The following list of symbols comes with bracketed values that indicate how much you can win if hitting five related symbols on a payline. These symbols are a golden and green snake-shaped figurine (150 coins), an eagle-head ring (200 coins), a dreamcatcher (200 coins) and a tribal mask (300 coins).

The 20 paylines available in the pokie are adjustable, meaning a player is allowed to choose their number to wager on. Each payline accepts $0.01 to $2, so you can place the minimum of $0.20 and the maximum of $40 per spin. That said, you can now calculate the highest prizes that the listed symbols pay out for five of a kind. To do this, you need to multiply a value specified in brackets by x2. For example, five tribal masks award 300 x 2 = $600 at the maximum bet.

This symbol is like no other. It is distinguished from any other symbol in the pokie, both regular and feature one. Looking closely at Aztec Pyramid, one can suggest it acts as a wild. Well, it does, in a way, but actually this is a far cry from a wild symbol. The magnificent pyramid appears on the second reel only. When it stops on its position, the pyramid transforms into any other symbol and may (though it is not guaranteed) contribute to a win. In fact, what the pyramid does can be compared with a wild symbol, but the key difference is that the pyramid morphs into a random symbol instead of turning into the symbol needed to complete a combination.

The Sun and Moon icons are depicted anthropomorphically, meaning they have a human face. These celestial bodies were used to be personified by ancient people who attributed the sun and the moon with human traits and emotions. The two symbols are the most powerful elements of the pokie because they perform as wilds or scatters in different circumstances.

As wild symbols, Sun and Moon substitute for regular icons and help them complete combinations. Besides, both symbols are able to create of-a-kind and mixed combos. Two to five matching moons or suns pay out 20 to 1000 coins, while both symbols mixed on a payline award 100, 250 or 500 coins. Mixed combos of wild symbols occur quite often and result in decent wins.

As scatters, Sun and Moon pay out scatter wins equaling 2, 20 or 50 times a total bet, for three, four or five scatters, accordingly. If you play at the maximum possible stake, the highest prize for five scatters runs up to $2000.

If two or more of-a-kind suns/moons or mixed suns and moons land on adjacent reels, beginning with reel 1, they trigger a bonus feature. A player is granted 5, 10, 20 or 50 bonus spins with all winnings doubled during the feature. Free spins are retriggerable on the same terms that govern free spin activation in base game.

Many players normally skip the gamble feature, especially upon winning a fair amount of money. Those who love risk and want to try their luck are invited to click the Gamble button after a winning spin. The gamble round is a standard solution built into most of Aristocrat’s games. A player is asked to guess correctly a color or suit of a card and thus double or quadruple the gambled money, if a right pick has been made.

Sun & Moon is a 5-reel 20-payline video pokie with the maximum potential win of $2000. The game has two wilds, two scatters and a fruitful free spin bonus with up to 50 free spins at a x2 multiplier.