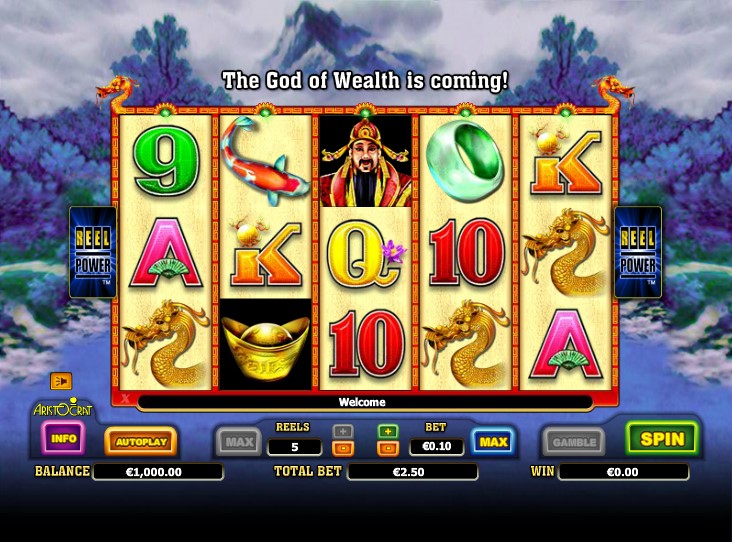 There are a few pokies that are synonymous with Aristocrat and Choy Sun Doa is one of them. Its popularity even grew bigger after it was released online and for mobile devices, because now players can be on even board with the God of Wealth every time they want, not only at land-based destinations. The most appealing feature that everyone would enjoy are five free spin options with different multipliers and risk factors.

In most aspects, Choy Sun Doa is a typical Aristocrat’s game with 5 reels and 3 rows – just a regular layout used by all pokie vendors. The pokie touches an oriental theme and gets you to see a bundle of oriental symbols on the reels. Not many games from the Australian software maker are designed for mobiles but the reviewed pokie is mobile-optimized, enabling you to play it on iOS and Android portable devices. The mobile interface was given much thought and effort since it has been simplified as far as possible, with just Spin and Settings buttons left.

The pokie features 243 ways to win where identical pictures are considered to have formed a winning combo when they stop anywhere on adjacent reels. Due to this model, you will see your balance go up on almost every round. It bears reminding that pokies based on this model have no paylines in a traditional sense and a bet is placed on the entire field, not individual lines.

People in China widely believe in luck, fortune and numerous signs that an average European man would call superstitions and relics of the past. In this Asian pokie, the developer utilizes a whole array of these graphical images, which are closely associated with the ancient and mysterious culture of China. Some of the symbols like 9, 10 and up to A are a kind of tribute to tradition in pokie making because these letters and numbers are far from Chinese culture. The said symbols are the least valuable and pay out the maximum of 200 coins. Other symbols include (in ascending order of value) a red envelope (300 coins), koi (300 coins), jade ring (800 coins), golden coin (800 coins) and golden dragon (1000 coins).

The Real Power system developed by Aristocrat for their pokies lets players deactivate one or more reels, starting with the rightmost reel, and thus bet less. When switching off any number of reels, the central row remains active for all the gaming process. If you disable, for example, reel 5, then all five-of-a-kind combinations will be removed, except for one single combination that runs exactly along the central row. If you play with all the lines activated, then the minimum and maximum bets are $0.25 and $50 per spin.

The God of Wealth, Choy Sun Doa, is here to help you earn more. Though he can only appear on three middle reels, he is still an efficient assistant since it substitutes for missing symbols in a combination.

The God of wealth unleashes its divine power during free spins, bestowing you with prizes fit for a king. To enter the bonus mode, you should first see three gold sycees (a Chinese bullion of gold in the shape of a boat) left to right. Scatters pay out x5, x10 or x50 times a total wager (up to $2500 at max) when you hit 3, 4 or 5. You will then be presented with five options to pick from:

Game rules read that return to player for all the five modes is virtually the same but if you pick less spins, you may see very big wins. So choose wisely which mode you prefer depending on how much risk you would like to take. The multipliers listed above apply to combinations with a wild substituting. It would be reasonable that a player should select a middle option (8 to 15 spins) with balanced gameplay and good probabilities of winning decent money rewards. Free spins can be won from within the feature if you land 3+ scattered gold sycees again.

Here is more to come! A red envelope, which is deemed to be a medium-valued regular symbol in terms of payouts, play a crucial role during free spins. When it appears on the first and fifth reel at a time, the pokie awards you a random cash prize that equals to your total bet multiplied by 2, 5, 10, 15, 20 or 50. If you play at the top 50-dollar stake, the bonus prize can amount to $2500.

Each spin where you have won activates the Gamble button that you can click in order to trigger the gamble feature (this is an optional game mode that you can ignore and continue spinning). You will be invited to guess a color or suit of a card. A correct guess will double your winning or increase it by 4.

Choy Sun Doa (Aristocrat) is a Chinese-themed pokie with 5 reels and 243 ways to win. The key features include a scatter, a wild, five free spin choices and numerous wild multipliers during free spins. The game is suitable for low-rollers since the lowest accepted stake is $0.25 on a round.