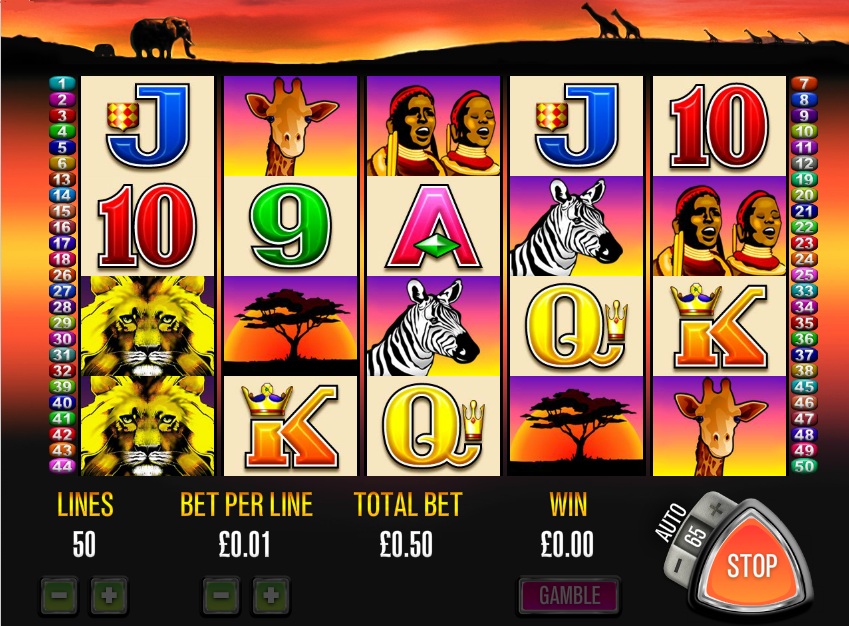 The pokie came to the online casino ecosystem over 10 years ago, following success of its twin slot machine developed for land-based casinos. As many older versions from Aristocrat, 50 Lions has simple graphics but its gameplay is so captivating that you can easily get hooked on it for many hours. The reason of its immense appeal are stacked wilds that may cover the entire field in some circumstances and bring you a hefty win. Featuring 50 paylines, the game is affordable for everyone as the minimum bet is as low as $0.50 per spin. The downside to the game is the absence of a mobile version but many gamblers believe Aristocrat would make up leeway and release the game for mobile users.

Taking you to the heart of Africa, the backstage picture behind the reels displays the great outdoors of the continent where the civilization is still backward and where the boundless and fruitless Sahara desert gives habitat to thousands of animal species. This exotic pokie has a 5×4 layout, meaning that 20 symbols are visible on the reels at the same time. As the action unfolds over 50 paylines, you get numerous chances of winning big-sized prizes thanks to stacked symbols.

The imagery is related to Africa, its wildlife, nature and inhabitants. At the lower part of the paytable there are common playing card icons from 9 to A. They win if three or more of the same land from left to right, paying 10 to 400 coins depending on how many symbols match. A lonely tree against a rising sun pays out 400 coins for five of a kind, and the same prize is credited to your balance if five African tribal women land. Then go local animals that populate the vast regions of Africa. Giraffe and zebra are identical in their payouts, awarding 4 to 500 coins, while Lion, the monarch of all beasts, gives you the pokie’s largest prize of 1000 coins if five of them step onto an active payline.

Aristocrat made the game suitable for every budget. Each of the 50 paylines accepts from $0.01 to $4, and only one coin can be wagered on a spin. That said, a bet ranges between $0.50 and $200 so even high-rollers are welcome to play the game for real money and win big. Considering the bet options, you can now determine the highest prizes that the pokie can generate when non-feature symbols appear in proper positions. Five zebras or giraffes pay out $2000 at max, while the top prize for five Lions amounts to $4000 if playing at the maximum stake.

Lion, the highest-paying picture in the pokie, comes in groups of four, while other regular symbols are always single on any reel. This means you have better chances of hitting an excellent combination if a Lion stack stops on more than one reel. Sure, you will not always see 4 lions on a reel because a portion of the stack may be hidden below or above the edge of the reel, but even a partial stack with two or three lions may contribute to payouts.

A flower symbol is considered a scatter. Three of them must land on reels 1, 2 and 3 at a time to launch 10 free spins. In addition to the bonus spins, you get paid 100 coins (up to $400) for that combination of symbols. Flowers do not need to fall exactly along a payline because scatters count in absolutely any position. Free spins would not be so interesting if not for an extra feature that adds fun and boosts your winnings massively. The feature in question relates to wild symbols.

In normal gameplay, outside of free spins, the wild, which is represented by a diamond, behaves in a traditional way: It substitutes for all regular symbols and helps them complete combinations. There’s also a limitation for diamonds, which is their absence on the first reel. This limitation leads to that wilds cannot form combos by themselves. But in free spins their role is much bigger. Every bonus spin, up to the very end of the feature, a new wild is added on the screen, thus the last spins may become very fruitful, especially if diamonds cover reels 2 and 3. On the last, tenth, free game, you have 10 diamonds on the reels, which can spur an immense win, which is much bigger than $4000 for five lions.

50 Lions is an old title from Aristocrat, which is still in great request by Aussies thanks to its wonderful features such as free spins, stacked symbols and mind-blowing properties of the wild symbol during free spins. The lowest bet is $0.50 and the highest win in the pokie reaches $3000.