Queen of the Nile Pokie

Play Queen of the Nile Pokie for free 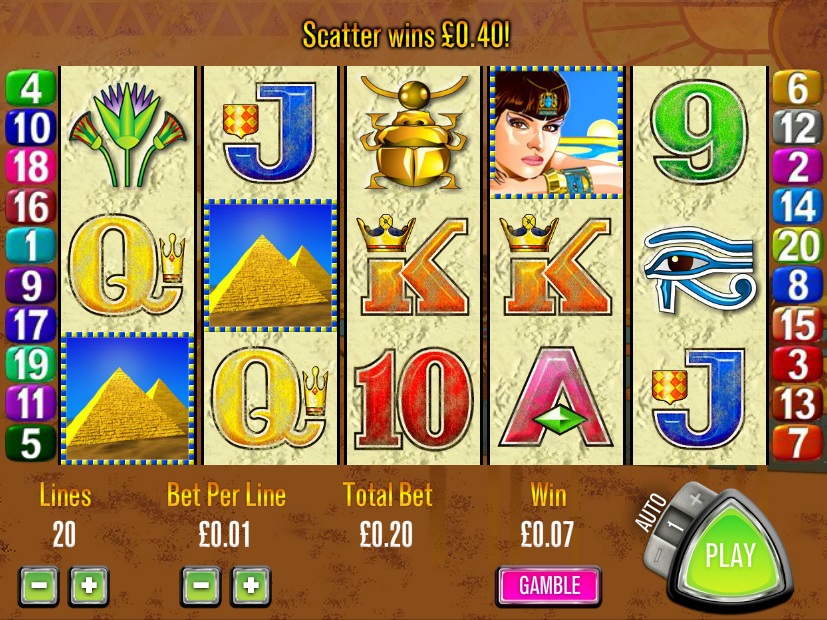 Queen of the Nile Pokie Review

Queen of the Nile is one of the oldest pokies on the market. It’s hard to believe that a game originated at the end of 1990s could be still sought after by online casino fans. This is a true retro game that has a very few bonus features including a wild multiplier, free spins and a gamble feature. Despite its simplicity and plain graphics, Queen of the Nile is a generous game with high payouts in both regular mode and free spins. If you prefer modern 3D solutions, you will not find the pokie impressive. But players who like quality 5-reel pokies and disregard graphics will certainly be satisfied with this iconic game from Aristocrat. Interestingly, a few years after the release of the reviewed game, Aristocrat came up with the sequel that has more features.

The pokie has 20 adjustable paylines. On both sides of the reel block, there are numbers indicating specific paylines. A player is allowed to bet on any number of paylines if he wants to, and this will decrease a total bet. But experienced players avoid using this option because it aggravates the “return to player” value built-in in the pokie.

The reels are set against an abstract brown background with some ancient Egyptian drawings and patterns. The symbols themselves try to be as close to the Egyptian theme as possible, but the overall picture is a bit marred by playing card icons, which are always used by Aristocrat. If their style were tailored to the pokie’s theme, it would be great. But the 9-A pics have a generic look without any thematic touch. They carry payouts of up to 125 coins.

Beside the playing cards, other symbols are as follows (in ascending order of payout): flowers (250 coins), Eye of Ra (250 coins), Golden Scarab (400 coins), Golden Ring (750 coins) and Pharaoh’s Mask (1000 coins). The figures that you see in brackets denote the prizes for hitting five identical symbols on an active line. You may expect to receive a relevant award when at least three of the same pictures land on a line. The only exception is Pharaoh’s Mask, two of which are sufficient to award you a small cash prize (2 coins).

Queen of the Nile has two settings that change a bet size. The first one (the number of lines) is reviewed above, while the second option refers to a line bet. Note that you cannot modify a bet on a specific line without other lines’ not being affected. Every change you make on the “Bet Per Line” buttons has universal coverage. The related values range between $0.01 and $1; therefore, the minimum and maximum stakes are $0.2 and $20 per spin, with all lines activated.

If you play at the maximum stake, the highest non-feature prize you can potentially obtain in the pokie reaches $1000. This amount is awarded for getting five Pharaoh’s Masks on an active betline. The pokie is grouped under low-volatile games in which small winnings take place very often.

Cleopatra, a legendary ruler of Egypt, is the most desired symbol in the pokie because it carries many advantages when stopped at a proper place of the screen. For example, two regular symbols occur on reels 1 and 2 on a payline. They do not complete a combination because it lacks the same symbol on reel 3. If the wild stops on the same line of the third reel, it will substitute for the missing symbol, and you receive a win for that combination. Moreover, the wild doubles the normal payout value when acting as a substitute. Cleopatra pictures are able to form winning combos by themselves, with five of them granting the pokie’s highest jackpot of $9000 at max.

Scatters (Pyramids) are feature symbols that are governed by special combination rules. Once two to five scatters appear in any position, you get an instant win. The most interesting thing about Pyramids is that their reward is based on the total bet instead of a line bet. The paytable reads that two scatters pay out x2 times a total bet, three scatters – x5, four scatters – x20 and five scatters – x400. If playing at the top stake, the max scatter win is equal to $8000.

When three or more scatters become visible after the reels have come to rest, you are awarded 15 free spins. The amount of free spins is irrelevant of the number of scatters; you always get 15 of them. During the feature, all wins are tripled from their normal levels. The bonus can be triggered again if three scatters land until the feature ends.

Aristocrat equips most of its games with a gamble feature in which a player is asked to guess a color or suit of a card. In case of a correct guess, the original money you have won in the base game is doubled or quadrupled. The gamble feature is optional and you can skip it.

Bottom line on Queen of the Nile

The 5-reel 20-payline pokie, which was developed by Aristocrat, features an Egyptian theme, a wild, a scatter and free spins. A useful addition to wild symbols is a x2 multiplier that applies to all wild wins. Any gamble game may last up to five rounds in a row.