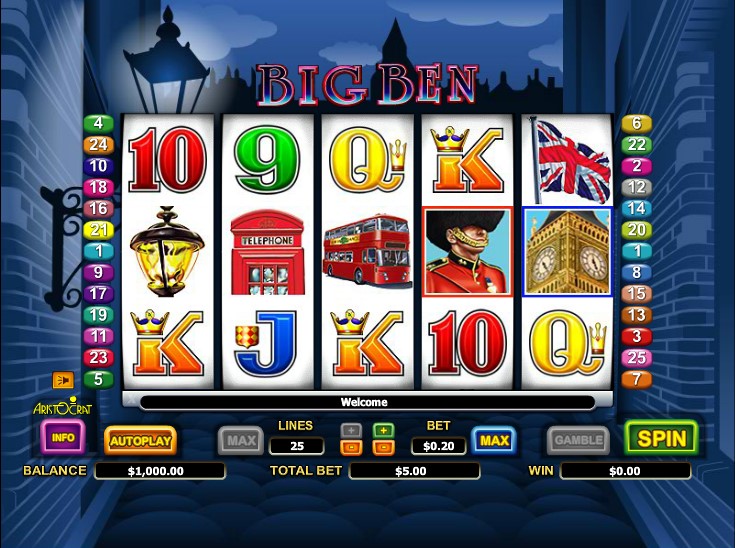 If you love Great Britain, its history and culture, then this pokie is just for you as it features the most iconic things that come to mind when thinking about that country. Besides its aesthetics and great entertainment value, the pokie has some alluring features like free spins and a themed Big Ben bonus that can lead to extremely big wins. Besides, it has a very prolific wild symbol that pays out 30.000 coins. Big Ben is pure fun for Aussies who appreciate quality pokies from Aristocrat.

The pokie has a typical 5×3 configuration with 25 adjustable paylines, the amount of which can be lowered down, if needed. Good news for mobile users is that the pokie is perfectly compatible with Android and iOS smartphones and tablets. The mobile game version has a friendly interface with just a couple of controls that do not hinder your spinning the reels and enjoying the background picture, which shows London at night.

Symbols utilized in the pokie can be divided into two groups: low-paying (card values) and high-paying (thematic) symbols. As around 99% of all Aristocrat solutions, the reviewed pokie is equipped with card symbols such as 9, 10, J, Q and K, which pay out 5 to 125 coins if three or more of them match on a payline. The other set of symbols is made up of items that belong to British heritage. Let’s look at them in detail, starting from the lower-valued one and up.

A street sign of a historic pub where one can sup a pint of ale awards 250 coins for five of a kind. An old British-styled lantern, which used to be mounted on a post, will bring you 250 coins. A famous red telephone box has fallen out of use but makes a glorious comeback as five of them give you 400 coins. Who doesn’t know a red double-decker bus that takes London visitors to the most scenic places of London? In this pokie, five buses will drive onto an active payline and award you 500 coins. The Union Jack waving in the wind is a sought-after symbol in the pokie as five flags add 800 coins to your pokie balance. And lastly, a royal crown decorated with a big red gem pays out 800 coins. Now that you know how many coins are won for every non-feature combination, let’s see how much you get in real money terms.

The pokie is undoubtedly focused on low-rollers. Each of the 25 lines in the game accepts $0.01 to $0.20, which translates into the minimum bet of $0.25 and the maximum bet of $5 per spin. This narrow bet range is ideal for players who don’t like risking their money. Now you can do simple maths to define dollar amounts you receive for each combination described above: lanterns pay $50, booths – $80, buses – $100, flags and crowns – $160, each for a five-symbol match. You can reduce the number of enabled lines to 1 and bet a penny per spin but this practice raises doubts on its efficiency as you lose too many chances of winning.

Did you know that Royal guards wear so big and long hats to intimidate their enemies? Another trivia about these men, who stand like a graven image while on duty, is that their guns are never loaded, except for some rare cases of extreme potential danger. The Guard is a wild symbol in the pokie and perhaps the most beneficial one. This is because it not only substitutes for regular pics but also creates combos itself. If you are lucky enough to get four of them, the pokie will pay you 3000 coins ($600 at max) and hitting five Guards awards a stunning 30,000 coins ($6000). The wild also doubles normal payouts when substituting.

The Big Ben, which resides in London, acts as a scatter symbol, and getting five of the clock towers on the screen hits x1000 a total bet, up to $5000 at the maximum stake. At least three scatters are needed for the pokie to give you entry into a free spin round where you receive 15, 20 or 25 free spins with all wins doubled for the entire duration of the bonus. That said, every cash prize will have a double value. If, say, you land five wilds during free spins, you earn $12.000. What’s more, free spins can be won again if you land 3+ scatters while the bonus is active.
Big Ben feature
This tourist attraction is the key element of the pokie and your chance to derive even more money from the game. You just need to be patient and spin the reels until you see the Big Ben on reels 1 and 5 simultaneously, at which point the feature begins. The Big Ben then chimes 1 to 12 times. The number of chimes determines your final bonus prize, which ranges between $0.50 and $2500.

The pokie has a distinct British aura around it as it is full of local landmarks and icons that have for many years and even centuries been associated with Great Britain. Who will certainly love the game are low-rollers since the max spin wager is as low as $5. Special features include a free spin round, wild symbol and Big Ben bonus. Availability of the pokie for mobile play is another incentive for users to save the game in their favorites.