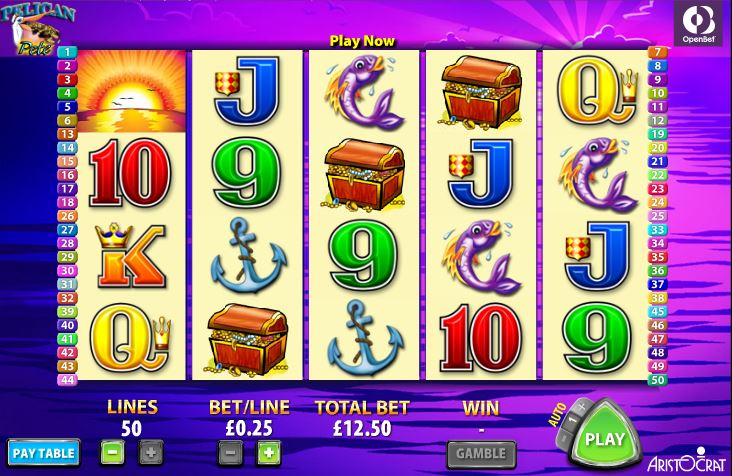 Simplicity is Aristocrat’s staple trait and Pelican Pete is no exception. But being simple is not synonymous with being dull. There are no exclusive, innovative bonuses in the game but it is nearly perfect in how it presents itself to the public. The only special feature that stands out is Sticky Wilds. They are activated only in free spins but the remaining gameplay is fairly basic – just 5 reels, 4 rows, 50 paylines and straightforward action without any bells and whistles peculiar to modern five-reel solutions. Pelican Pete is a great game for many Aussies who love classic titles developed by the Aristocrat software provider.

Pelican Pete is played over a big field with 20 symbols visible simultaneously. Through the reels, you will see an ocean at sunset, purple and blue sky, clouds and seagulls; everything is drawn in simple lines. The entire UI has a generic appearance, which is utilized in all pokies from this developer so it will take you no time to get used to control buttons and settings. Having so many paylines means each spin has more chances to end with a winning combination. The principle of evaluating combinations is similar to most pokies out there; you need to hit three (in some cases, two symbols are possible) matching icons on an active payline pattern.

The package of symbols is divided into two subgroups: playing cards and thematic icons. The playing cards are low on the totem pole, awarding 5 to 50 coins for three, four or five of a kind. They will often make appearance in a needed formation, making your coin balance fluctuate up and down. So far as concerns the themed pictures, they are represented by Starfish, Anchor, Treasure Chest, Fish and Sunset. All of the mentioned, except for Sunset, have nearly identical payouts, with 75 coins being awarded for five. The Sunset symbol awards a bit higher, at 100 coins at max.

There are two options to customize in the pokie. The number of active paylines can be reduced from 50 to 1, if desired. This option is thought to be of no practical use because a player cuts his winning chances when removing active paylines from the board. Anyway, you can play around with different payline amounts just for fun. The second option is a line bet, which is altered between $0.01 and $2. Therefore, the minimum and maximum bets are $0.50 and $100, provided you play with all lines switched on.

Now a word on fixed jackpots. As the symbols pay out quite uniformly, top prizes are of frequent occurrence. During regular spins, five Sunsets grant you up to $200, while other high-paying pictures award $160 at the maximum stake. As you can see, the top prize is just two times as high as the maximum total bet, which is indicative of the low-variance nature of the game. This is supposed to mean that the pokie has the potential to pay out low-valued amounts multiple times in a row, and this extends your playing sessions.

Sunsets are the most valuable pictures of all. To give you more winning opportunities, this symbol comes in a group of two to four on the reels. When a round ends and the reels stop, you might see two or more Sunsets on the same reel, and this can propel into wins on multiple paylines at the same time, especially if Sunset stacks occur on reel 1 and/or 2. Stacked symbols are also effective in free spins.

Pelican Pete has a big pouch on his beak that can room lots of coins. He is ready to share his wealth with you if it appears on a payline substituting for a regular symbol. Sadly, Pelican Pete cannot create combinations by himself but it is still a loyal assistant, as it contributes much to combinations of other symbols, except for scatters. Another thing to note about the wild is that it stops on all reels other than reel 1.

The fun does not stop here because you have a free spin bonus in the pokie. Watch out for lighthouse icons as three of them will trigger free spins. These alluring symbols are tied to reels 1, 2 and 3 only. When they hit these reels, you obtain 10 free games. During the bonus round, all wilds that become visible on the screen get sticky and persist in place for the entire 10 spins. With each new spin, more wilds become fixed and your wins grow progressively. If three scatters appear again, you are awarded 5 extra spins that are added to the remaining amount.

The gamble feature in the pokie is a traditional mini game that you can enter to try to gamble the money you have won in the latest normal game. On a new screen, you will be presented with a face-down card and have to pick one of six options that, in your opinion, characterizes the card. These options are two possible colors and four suits. Giving a correct guess increases your winning by x2 or x4.

Pelican Pete is a low-volatile pokie with 5 reels and 50 adjustable lines. Its major features include a wild card, scatter, sticky wilds and retriggerable free spins. A bet ranges between $0.50 and $100.