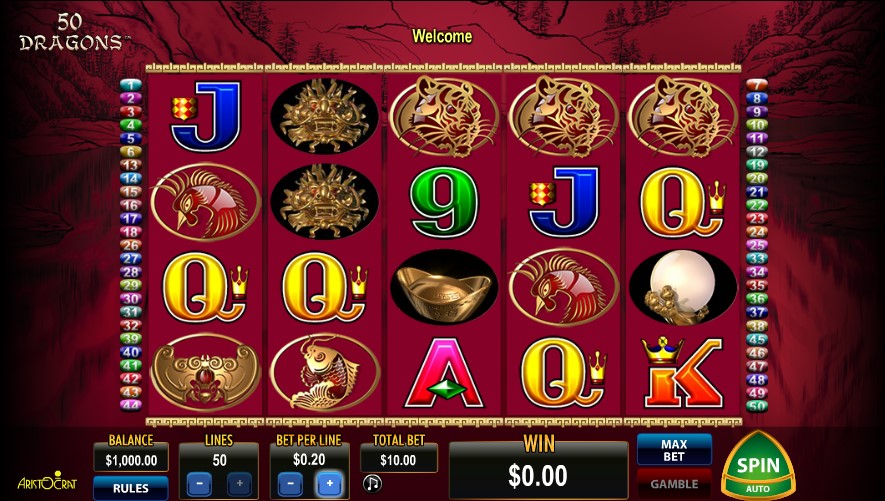 The pokie first made appearance in land-based casinos where it became a favorite due to its unique features and high payouts. Later on, Aristocrat introduced it for online casinos where it also had traction. Players of today find the game appealing as well, since it provides a huge betting range, an interesting Asian theme, stacked symbols and a possibility to grab generous money prizes in free spins thanks to extra Wild pearls. Given 50 paylines in the pokie, your chances of ending a spin with a win are very high. The game provider made it compatible with mobile devices where it runs perfectly smooth.

50 Dragons can be treated as an extended version of 5 Dragons, another spectacular pokie from Aristocrat. But the differences between the two are clear: 50 Dragons features 4 rows and a payline-based design. The reviewed game radiates the Asian atmosphere in every detail. The four reels look like painted on long purple scrolls that, in turn, are located against an intricate black ink painted panorama of a rural landscape. The prevailing tones in the design are red and golden, which create a vibrant and lively look and feel. Design-wise, the game is meant to deliver an Asian theme in a straightforward way and cause a strong sensation of a delicate oriental culture.

The set of symbols in the pokie consists of low-paying and high-paying ones. Traditionally, 9 to A cards are at the bottom of the paytable with awards ranging between 10 and 400 coins. There are four animal symbols that are artistically pictured with golden colors and resemble ancient charms or pendants. A Bat and Koi symbol, when appeared on a payline, win you 20 to 400 coins for three, four or five of a kind. The other two symbols, Tiger and Rooster, belong to Chinese zodiac animals, and they pay out 4 to 500 coins when even two of them line up. And finally comes the most lucrative picture in the set, this is Dragon, the most powerful mythological animal in the folklore of ancient China. This mighty symbol will see you awarded with 1000 coins.

And now let’s explore how much a player can expect to win in the pokie. First off, a few words about the betting options for you to have an idea of how big (or small) your budget must be to play the pokie for real money. A coin size starts at one cent, meaning you can bet as low as $0.50 per spin. By increasing a coin size to $3 in reasonable increments you thus escalate a spin value up to $150. Now that you know the min/max limits, you can calculate the maximum prizes available in the pokie. Actually, the top three prizes up for grabs are $3000 (dragons), $2000 (zodiac animals) and $1600 (koi and bat).

Taking into consideration that the highest bet to highest win ratio equals 20 ($3000 / $150), it may be deduced that the pokie falls under the category of low- to medium-volatility titles with frequent but comparatively small wins.

As is already said above, Dragon is the best performing symbol. Another unmatched advantage of Dragon is that it is represented as a strip of continuous symbols. When the reels rotate vertically, you can see that all symbols are single, they go one after another and two of the same symbols never border each other on a reel. As for Dragon, it creates stacks, i.e. an uninterrupted sequence on one and the same reel. Due to this useful feature, four dragons may occupy, say, the first and second reel at a time, thus resulting in a big win.

An oval-shaped ingot of gold, known as a sycee, acts here as a scatter symbol. Its position is limited to reels 1, 2 and 3 only. Once there, a free spin feature is triggered. You receive a total of 10 spins with the chance of winning 5 extra spins under the same starting conditions. Every free spin, a new wild symbol is added onto the reels for the duration of the bonus, and this exciting addition enhances your winning chances higher and higher with every new spin.

The wild symbol in 50 Dragons is represented by a milky pearl with small inclusions of gold. The wild cannot land on the first reel and it has no combinations of its own. However, it is able to substitute for all symbols, except for scatters, and help them form combinations.

The mobile interface is very simple and tastefully designed, with only a triangle-shaped Spin button seen to the right of the reels. Other controls as well as bet options, autoplay parameters and paytable can be accessed by clicking the Settings button. Since most game controls are hidden, the reels have a neat, uncluttered look that provides excellent online casino experience on the go.

50 Dragons is a 5-reel 50-payline pokie that is devoted to an Asian theme and features a wild symbol, 10 free spins and extra wilds during free spins. The maximum possible prize is $3000 at max. The game can be recommended for both low-rollers and high-rollers because a bet ranges flexibly from half a dollar to $150 per spin.