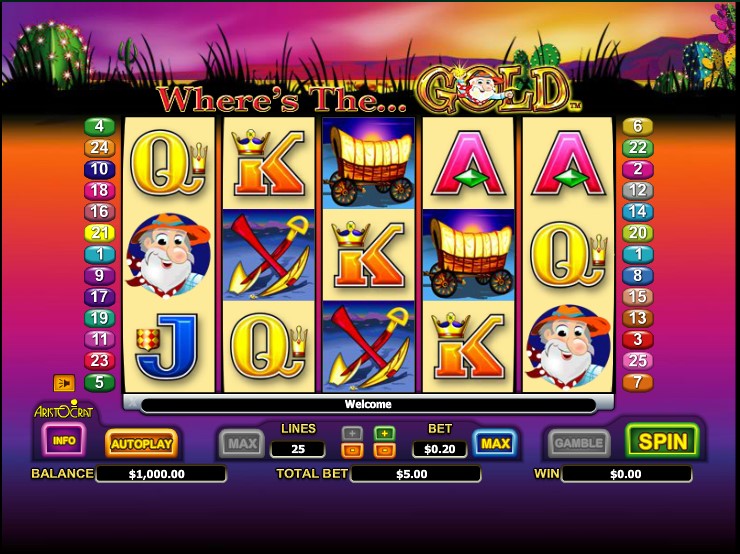 So where’s the gold? Ask this question to one of five characters who will tell you the truth and award you up to 10 mind-blowing free spins with lots of golden wilds. The online version of the game that flawlessly clones its land-based peer was released by Aristocrat in 2014. The reviewed online pokie is one of the most well-loved titles that many avid fans seek for, because it has easily triggerable free spins, unlike other games from the prominent software developer. Free spins occur so often that many players who have never tried this pokie get astonished when they make a few dozen spins on Where’s the Gold. Believe it or not, the game sometimes provokes server crashes because of a great number of gamblers playing it simultaneously in different countries of the world, including Australia.

The pokie focuses on a gold-mining theme and has a humorous, tongue-in-cheek atmosphere that manifests in pokie symbols and a short introductory feature preceding free spins. In terms of configuration, the pokie has 5 reels, 3 rows and 25 adjustable paylines. Besides, the game is made compatible with smaller screen resolutions where it has a dedicated mobile interface. When you first load the game, you will see nothing exceptional: the background is a dull field and trees that are almost hidden by the big reels.

Symbols could be much better if not for the infamous playing card letters J, Q, K and A. There is hardly any gambler in Australia who is unaware of Aristocrat’s staple style of putting these threadbare icons into every game of their authorship. Anyway, one cannot say they spoil the overall picture because these J, Q, etc. look bright and colorful, just like themed symbols themselves. The latter are represented by imagery which can be associated with mining or gold digging. There are only four themed non-feature symbols including digger’s tools (x300 for five of a kind), a cart (x300), an entrance into a mine (x500) and a radiant dwarf (x1000). Note that the last two symbols in the list create two-of-a-kind combos, while the first two symbols cannot boast doing this.

You will be greatly surprised to know the pokie has no wild symbols in base game. When in a normal mode, winning combos are created without being backed up by wilds. This is a bit unusual solution for Aristocrat because nearly all of its games have a wild symbol of one kind or another. But be patient and wait for free spins, since there you will have a real extravaganza of wilds!

A bunch of burning dynamite sticks is a scatter symbol and your pass to free spins. When 3, 4 or 5 scatters land, you gain access to a fabulous Pick a Character feature that, upon completion, grants you free spins. Getting back to the scatters, you obtain an instant money reward, the amount of which depends on your total bet, instead of a line bet. The maximum multiplier applied to a total bet is x50 ($5000), which is awarded for hitting five scatters in absolutely any place.

You are not going to receive a fixed number of spins, because this is boring. Instead of that, the pokie offers a mini game that will determine the number of free spins you will have won and the number of accompanying wild symbols. Sounds a bit tricky? Let’s explain what you are going to experience on triggering this feature. On a new screen, you will see five comical characters who are far from being mine diggers. The characters are Mary Money, Find-doh the dog, Happy Lucky, Peter Panner and Prof. Gold (some other characters may be present but their total number is not greater than 5).

You need to click the Start Feature button to proceed. The pokie than highlights a randomly selected man, woman or dog, and the character begins digging. As a final result, the number of gold nuggets that he/she/it has dug equals the number of free spins (up to 10). But this is not the end. The pokie then assigns 1, 2 or 3 regular symbols that will serve as wild during free spins, and these regular symbols will become golden.

When the previous feature ends with your knowing exactly how many bonus spins you get and which symbols become wild, free spins begin automatically. Every time a golden (ex-regular) symbol appears, it will substitute for other regular pics (of course, if it lands in a proper position). And a final note on free spins: the only negative side is the absence of multipliers. But this lack actually comes unnoticed because the bonus feature is activated very-very often and you receive good prizes even without the help of multipliers.

The gamble feature in the pokie is not worth any special mention because it has a standard guess-a-card format with the chance to get your winnings increased by 2 or 4.

Bottom line on Where’s the Gold

Now you know where the gold is. It is definitely in your pockets or it will be there after you will have played the game for some time. This 5-reel 25-line game will definitely become your favorite title because of its abundant free spin feature with up to three wilds.