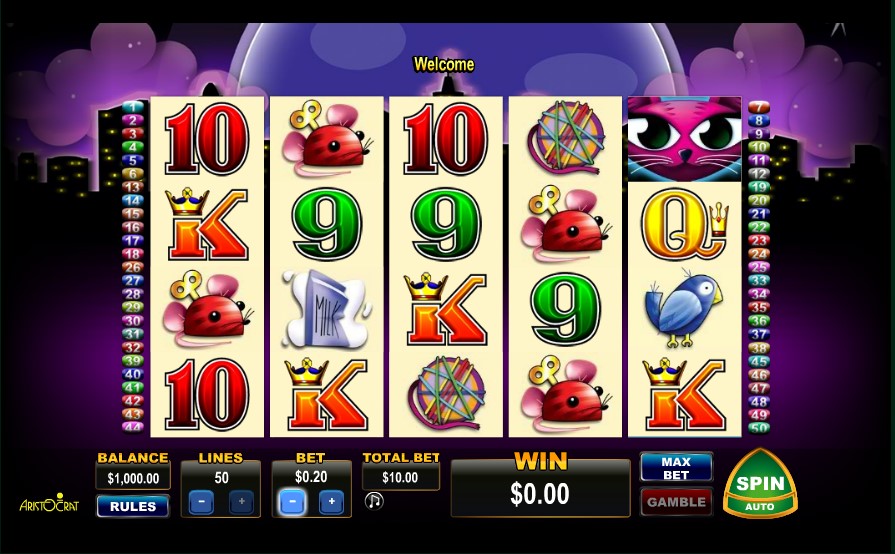 This nice and funny video pokie from Aristocrat tells you the story of little Kitty, a domestic kitten who is loved by her master, given a big diamond hung on her collar. The pokie differs from other pokies from Aristocrat because of its numerous features such as stacked symbols and sticky wilds that cover the field almost entirely. You will get to fall in love with this amazing pokie as Kitty will bring you cash in her small varnished claws.

The pokie has 5 reels, 50 paylines and 4 rows. Due to a wide variety of bet lines, combinations fall quite often, although they are not big and you have to wait until a free spin occurs, because winnings there are extremely generous thanks to wilds that may occupy many positions on any single spin.

Needless to say, the pokie has a set of card icons as low-paying pictures. The other symbols are related to the feline theme and include a ball of wool, a half-empty milk package, a wind-up mouse, a bird and a pop-eyed fish in a bowl. The first two symbols in the list pay out when three, four or five of them line up. As for other regular symbols in the list they award when two of the same occur on a betline. Combos have almost identical payouts, for example, balls of wall and milk packages pay 75 coins for five of a kind. The highest-valued combo consists of five fish on a betline and it awards 100 coins.

From what you see, the earnings are not that high per each regular assembly of symbols. This is true but a peculiar thing about the pokie are stacked symbols that add the lion’s share of winnings to the entire “profile of winnings”.

Miss Kitty features two configurable bet options, these are the number of paylines and a bet per line. Paylines can be deactivated up to 1, though experienced gamblers will hardly ever use this option since it deteriorates the winning chances. A bet per line varies between a penny and $2, therefore, a total bet can be within the range of $0.50 and $100 per spin.

Individual payouts per combination are very modest, or worse. Each specific combination of non-feature symbols, published in the pokie’s paytable, brings you very little, with the highest award of $200 being for five Fish. The second largest prize of $150 is given away for hitting five birds or mice. But the things are not so bad as you might think because most spins end in more than one winning combination, thanks mainly to stacked symbols that contribute to creating multiple combos on a single spin.

Fish, which is the most generous regular symbol in the game, often comes in groups of four. The implication is that you will often get to see more than one Fish picture on any given reel. Moreover, it often happens that 10, 15 or more fish appear on the reels at the same time, which cannot but create opportunity for moderate-sized wins. Apart from Fish, a wild symbol also appears stacked but it does that during free spins only.

Miss Kitty herself is a wild substitution symbol which has a function of any typical wild symbol. It helps regular pictures to form a combination successfully by standing in for a needed symbol. Sadly, the wild cannot be located on the first reel but only on reels 2 through 5. Anyway, Miss Kitty is a very helpful icon because of its special role in free spins. Another negative point to the wild symbol is its disability to create combos independently of other symbols.

A Full Moon is a scatter that needs to appear on reels 1, 2 and 3 simultaneously to trigger a free spin feature. Before you proceed to the bonus spins, you receive a prize worth your total bet times x2 (up to $200). Here you have a strong chance of earning hundreds and thousands of coins thanks to wild symbols. At the very beginning of the feature, you get 10 free spins.

Every time a wild symbol lands, it sticks to its original position until the end of free spins. As the feature runs, more wilds will be fixed in place, thus generating more combinations. What’s more, wilds are stacked during free spins and that is supposed to mean that up to four Miss Kitty pictures might stop within the visible part of the reel on any spin. And a final touch to free spins is that you can earn five extra spins if 3 Full Moons land again.

The pokie gives you a chance to increase your last winning by x2 or x4. To do this, click the Gamble button and look for options offered on the second screen. You will see a facedown card and six selection options: 2 for card color and 4 for suit. Making a right choice will pay you twice or four times as much as your original winning.

Miss Kitty is a 5-reel 50-payline video slot, which is created by Aristocrat and has 4 rows, instead of traditional 3. Features include stacked high-paying symbols, a wild and free spins with sticky wilds. A bet falls within the range of $0.50 and $100.