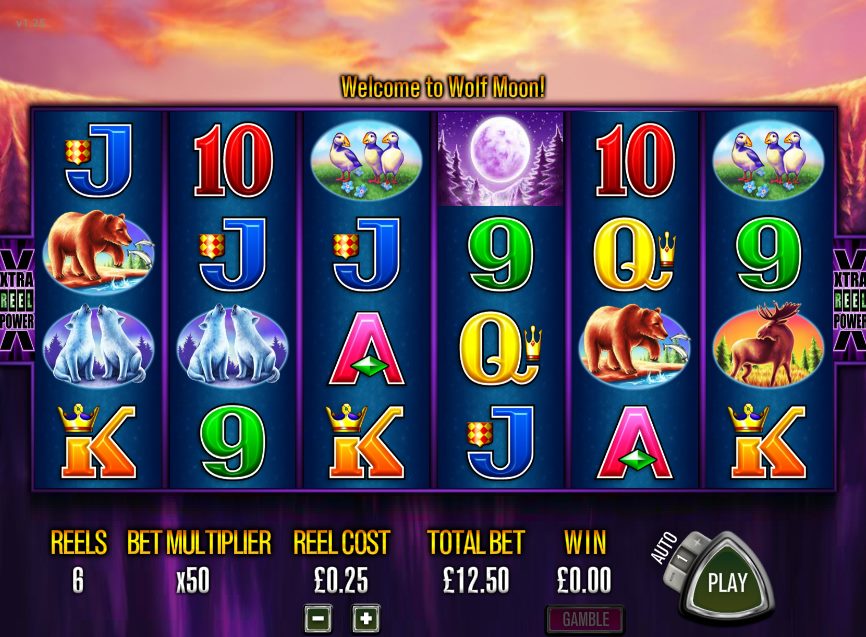 Six-reel pokies are extremely rare these days and you might spend months in an online casino without encountering one. Wolf Moon gives you a unique opportunity to give a shot to a six-reel game that has 4096 ways to win across the reels. Your travel to wilderness will be accompanied by some superb bonuses such as free spins with a unique Lucky Zone feature that creates a big wild area at the center of the reels. Wolf Moon is an impressive game with frequent wins and fast gameplay, and some ten years ago it was a hit at land-based casinos.

Wolf Moon has an astonishing number of symbols visible on the reels. At every given moment, there are 24 pictures covering all symbol positions because the game has 4 rows instead of traditional 3. Because of this unusual engineering approach to pokie-making, Wolf Moon creates combos on virtually every spin, and this is very fun because your winning streaks never end. The game has a no-payline system where a player wagers on the entire game field, not specific paylines. Under this unusual layout, winning combinations are completed when three or more matching pics stop next to each other on neighboring reels, and a combination must begin with the utmost left reel.

The pokie is actually themed around Northern animals who live in Canada and Alaska. The overall game design is pleasing to the eye but there is nothing exceptional about it. Everything is fairly simple but playable. Wolf Moon belongs under low-volatility games because you will have very frequent wins, but their amounts are small in most cases.

The pokie has a package of playing card pics from 9 to A and a bunch of quality themed symbols. Playing card pics are low-payers and the maximum prize you can grab for them is 150 coins. Note that each winning combo requires at least a three-symbol match. Along with the plain 9s, 10s and etc., the pokie offers more picturesque symbols such as Northern birds (250 coins for six of a kind), a moose (250 coins), a bear (500 coins), white cubs (500 coins) and an adult wolf himself (625 coins). Pay attention that each symbol is able to create 6-of-a-kind combos, since the pokie consists of six reels.

The pokie has a special type of betting system where a player has only one configurable option, which is a reel cost. This value is modified between $0.01 and $2.5, and then a bet multiplier of x50 applies to the selected reel cost to define the total spin bet. Therefore, you can wager anywhere between $0.50 and $125 per spin.

The highest payout that one non-feature combination can grant you is $1562.5. It is very likely that each spin may generate more than one winning formation of symbols, so you can count on two, three or even a dozen of combos after reels stopped.

The full moon above the snow-white trees is a wild symbol. During base game, it performs limited functions because it falls on the two central reels only. It stands in for other non-feature pics and helps them complete combinations.

A green star sparkling with neon light is a scatter symbol and your key to big wins. Three scatters in any position will return your total bet. Four or more scatters pay out x2, x5 and x25 times your original bet, accordingly. In such a way, the maximum potential scatter win is a hefty $3125, which is the first largest jackpot in the pokie.

When 3 to 6 scatters land in any place of the reel set, you get 12, 24, 30 or 40 free games, respectively. During free spins, you will enjoy an outstanding Lucky Zone feature. As soon as free spins begin, two central symbols on reels 3 and 4 get enclosed in green frame, and this area is called the Lucky Zone. Every time a wild symbol lands within this area, the other symbols in the Lucky Zone will turn into wild, so you will get four wild symbols at the same time.

You are awarded a payout if any winning combo is formed. Then, reels 3 and 4 are kept in position, while the remaining reels respin once. After the bonus respin, you get a reward again if any winning combo has been created. Good news is that free spins are retriggerable and you may earn another set of 40 free spins if 6 scatters land.

The gamble feature in Wolf Moon is standard. There is a facedown card and your task is to predict correctly what color or suit it is. Then it flips from back to front, and a correct prediction of the color or suit will increase your base game winning by x2 or x4.

Wolf Moon is a 6-reel pokie with 4096 possible ways to win a reward. The game has a wild, scatter and up to 40 free spins with an unparalleled Lucky Zone feature. Strongly recommended to Aussies who love unconventional solutions in online pokies.