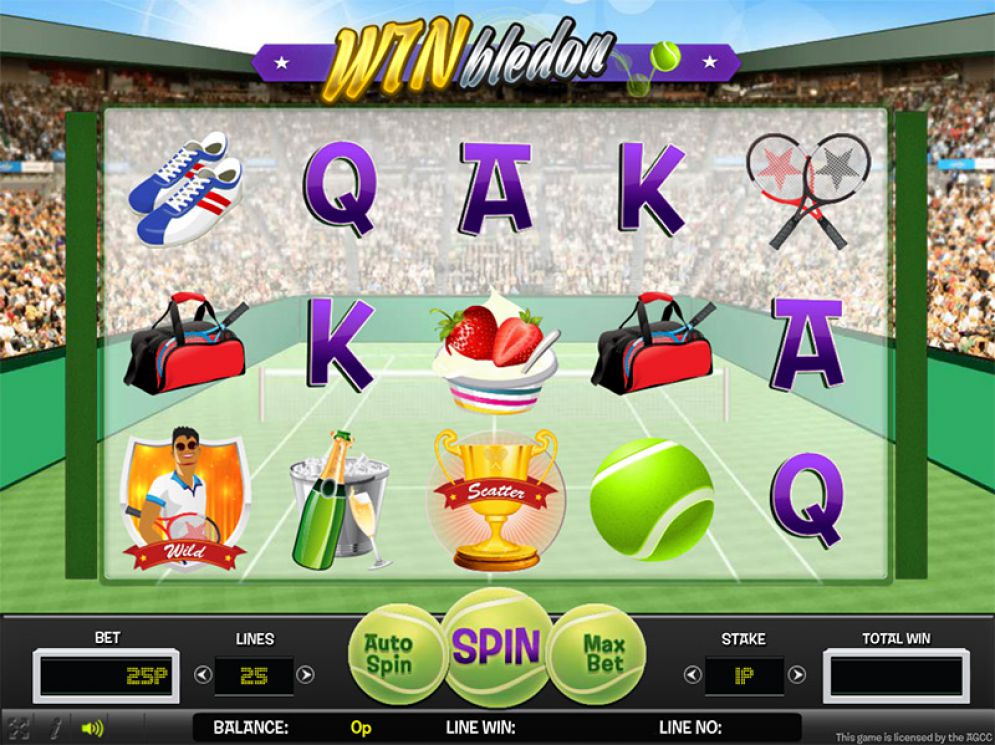 Winbledon is a tennis-themed pokie, as you might have guessed from the title. There are not many pokies out there that would be inspired by a sport, and this is one of rare examples delivered by Bally. Winbledon has an impressive visual design that plunges you into the heart of a tennis competition, right into a big stadium bowl. Feature-wise, the pokie offers up to 20 free spins, wild symbols and a one-of-a-kind tennis contest bonus where you are to compete with the artificial intelligence for the top position. This is certainly the game you should try if you like unorthodox approaches to bonus features.

The game strikes your imagination at the very first glance. The reel set, which consists of 15 symbols arranged in a 5×3 grid, is drawn on a semi-transparent plastic screen that vaguely resembles a large flat television or a big telemprompter unit used by politicians when they are delivering speeches to the public. Through the transparent screen, you can see a big crowded stadium where a lawn tennis match is about to begin. Looking at three bright tennis balls in place of three control buttons under the reels, you can say that the user interface is stylized with a tennis theme in mind.

On the reels you will come across the following symbols: three playing card values (Q, K, A) that differ slightly from a standard set used in many other games. Other symbols, which were given a thematic focus, consist of two crossed rackets, strawberries and milky cream (the most famous food at Wimbledon), a sport bag with a racket sticking out of it, a pair of sport shoes and so on.

The game uses a usual mathematical model with 5 reels, 3 rows and 25 selectable paylines. This is certainly a great distinction from other pokies from Bally, because the vendor equips around 95% of its games with fixed lines. This allows for greater flexibility in betting options which are adjusted in a wide range between $0.25 and $100 per spin. As an option, though not a reasonable one, you can reduce the number of active lines to 1 and bet just a cent per spin.

The pokie has two wild symbols, each one representing a male and female player. The male tennis player, sandwiching his racket between his arm and body, lands on the first reel only, while a beautiful sporty girl appears on the opposite side of the screen, on reel 5. Both of them do the same thing: they substitute for regular pictures as any other normal wild does. It stands to reason that the two wilds are nowhere near able to create combos by themselves, since two symbols spaced apart cannot physically create a payline combination.

An elegant golden Wimbledon trophy thwarted with a red Scatter band is a scatter symbol. They count in any position and once 3+ of them land in view, you are awarded 10, 15 or 20 free spins. The exact number of spins is determined by the amount of triggering scatters. This feature is capable of generating high wins due to a special wild feature. Essentially, one of the reels, selected by the pokie at ransom, will become entirely wild on each spin, and this cannot but grant you decent wins on almost every free bonus round.

The two wilds are not only substitutes but also bonus triggers. Once two of them appear on their designated reels, you enter a Tennis Match bonus game. On the tennis court, you will have to play with an opponent and try to win the game. The bonus gameplay a kind of mimics a real-life tennis game where one of the players hits the ball with a racket and his opponent whether returns or misses the ball. The results are random and involve no player’s skill – this is a mere game of chance, but looking at how you and your opponent hits the ball is really exciting. Bonus wins depend on the ultimate results and may reach x100 the total bet ($10k if placing the max bet).

This is a 5-reel pokie with 25 adjustable paylines. Coupled with the engaging gameplay, the pokie has a couple of interesting features like two wilds working in tandem, free spins and an unparalleled bonus game imitating a sequence of sets in a tennis match. The max jackpot is $10,000.