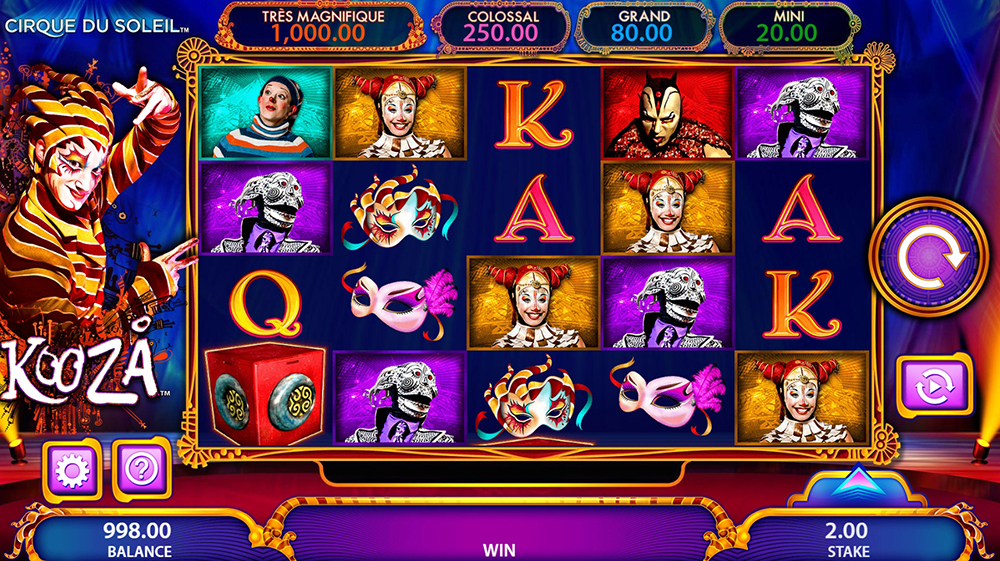 If you like bonus features, you will find them here in spades. Bally Technologies welcomes you to the most epic, majestic and awe-inspiring circus of all times. Performers at Cirque du Soleil defy gravity, show acrobatic tricks that look beyond physical abilities, and charm spectators with absolute muscle control when riding a bicycle on the wire. The pokie has two free spin modes, a Cash Box bonus where prizes up to $20,000 are offered, Mystery Stacked reels and much more. On top of that, there are four fixed jackpots up for grabs, with the highest one reaching $200,000.

The 5-reel 40-payline pokie is centered around the world-famous Cirque brand that came up with a new show called “Kooza” in 2009. The symbols used in the game depict performance artists of different genres and the most recognizable characters of the circus. The list of symbols include a red mask (up to $300 at max), a pink mask ($300), The Innocent clown performed by Stephan Landry ($300), an acrobat ($400), the Crooner whose costume is decorated with over 1500 Swarovski crystals ($700) and a sinewy tattooed guy ($1500). All of these symbols are complemented by Q, K and A low-paying card icons that award up to $200. All the non-feature symbols described above create combos when three of the same align on adjacent reels left to right.

Bet options in the pokie are attractive for all kinds of players because the minimum bet is $0.20 and the top bet amounts to $400 per spin.

A white word “Wild” on red background acts as a substitute for regular pics. It is also the highest payer in the pokie and getting 5 of them on a payline grants you the maximum of $4000. Besides, wilds are very efficient in the game because they may land in the form of stacks, thus adding more winning combos to the total count.

Each combination, taken separately, pays out humble amounts. What makes the game more vivid is stacked reels that contribute greatly to winning combinations. Each of the five reels contains positions reserved for mystery stacked symbols. At the beginning of a spin, these positions are randomly substituted with the same normal symbol including wild. This means you get whole or partial stacks of one and the same symbol across the reel set, which provides you good wins.

A big red box lands on reels 1, 3 and 5. When three of them land on their allotted reels, you get a box pick bonus where you are asked to select one of three boxes to reveal a prize. The prizes include cash ($20,000 at the maximum, depending on your bet) or one spin of a bonus wheel.

Getting three scattered Bonus symbols on the second, third and fourth reels initiates a bonus wheel mini game. Alternatively, a bonus wheel is won as a result of the Box Pick feature. On a new screen, you will see three reels that begin to spin vertically like a regular pokie. Then, after a while, the bonus reels stop and the section at the center will display your award. In the Bonus wheel mini game, you can win one of the following:

The mysterious Trickster character dressed in a candy-striped suit is a charismatic performer whose tricks leave the spectators wowed. Trickster is going to guide you into the miraculous world of Kooza and stretch the boundaries of your imagination. In the reviewed pokie, this enigmatic character plays an important role during Trickster free spins triggered in the Bonus Wheel. You are awarded 10 free spins and an instant prize of x2 times a total stake. Besides, the Trickster may walk onto the screen and upgrade lower-ranking symbols into more valuable ones, like an acrobat or even a wild.

This spectacular act of the show sees two performers running inside two rapidly spinning rings located on opposite ends, much like in a bicycle. Both of the men execute heart-racing tricks, moves and jumps during this most daring performance. When you win this feature on the Bonus Wheel, you receive 7 to 12 free spins at a multiplier of x2, x3 or x4. The “More Free Games” symbol landing on reels 2, 3 or 4 during the feature gives you 4 to 15 extra spins.

Everyone wants to win a big jackpot and the reviewed titles gives you the chance of leaving the show with thousands of dollars in pocket. There are four jackpot indicators always visible above the reels, and these show four jackpot amounts such as Mini, Grand, Colossal and Tres Magnifique. The jackpots are dynamic and are indicated based on your total bet: Mini equals x10 times the total bet (up to $4000), Grand is x40 (up to $16,000), Colossal is x125 ($50.000) and Tres Magnifique is x500 ($200.000). A jackpot round is opened if you land the jackpot space on the Bonus Wheel. Availability of jackpots is a great incentive for you to wager as high as possible.