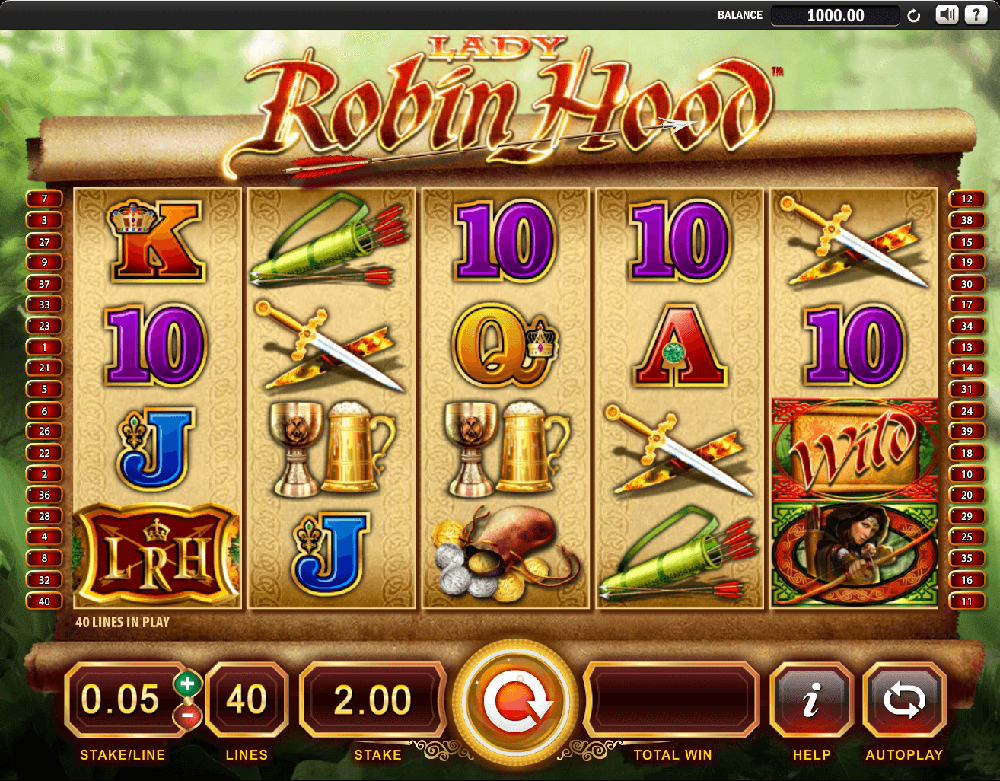 This is a 5×4 40-payline video pokie released by Bally. It is centered around a Robin Hood set of legends and novels, but the main character is a brave lady who does the same as Robin Hood used to: robbing the rich and helping the poor. The pokie has several interesting features such as stacked wilds, random sticky wilds and a free spin feature with wild reels. Free spins are one of the most beneficial elements of the pokie as you are in with the chance of getting more than one wild reel during the feature, and end up with thousands of coins added to your balance. Another technical aspect worth noting is that the reels are rotating unusually slow, giving you time to relax and think of big wins that may eventually happen if you play for real money. Lady Robin Hood will be a great pick for high-rollers because the maximum bet is a high as $400 per spin. Lady Luck is on your side, and this time she has arrows. Let these arrows grant you success!

The action of the pokie evolves in the medieval times, just like a series of ballads and legends about a heroic outlaw named Robin Hood. There are still ardent discussions on whether he was a real or fictitious personality. Whichever is true, you should not take care of that much because the female character displayed in the pokie is real. Well, she is real to the extent that she can bring you much money, especially her sharp arrows which you are going to see very often in the game. The pokie has 20 symbols visible at the time, and its reels are located on top of an open scroll, making you feel like a literature expert exploring an ancient piece of art.

The symbols used in the game can be broken down into two categories: 1) common playing card pics and; 2) themed pics. The first groups consists of 10, J, Q, K and A. These are lower-paying images that award up to $500 for five of a kind. The second subgroup of symbols relate to the Lady Robin Hood theme and include a small bag with coins ($500 at max), a goblet and beer mug ($750), a sword ($750), arrows ($750) and Lady Robin Hood herself ($1000 at max). All winning values given in brackets represent the highest possible payouts for five of a kind, provided you wager the top bet acceptable in the game.

The pokie has only one adjustable option that you can change with a view to adjust a bet size to your needs. This value is changed in the range of $0.01 to $10. Therefore, the total bet can be anywhere between $0.40 and $400 per spin. If you like Bally’s pokies, you already know this bet range is typical for the developer. Now that you know the max bet and payouts (see the previous paragraph), you may draw a conclusion that the pokie definitely belongs to the group of low-volatility games, the ones that have frequent payouts which are normally small.

The pokie features two stacked symbols. One of them is Lady Robin Hood and another is a wild. As the evidence from practice shows, you will see stacked symbols on almost every spin, and they sometimes fall on the first and/or second reels, which almost guarantees that you get a win, albeit a small one. Wild symbols, which are represented by an artistically written word “WILD” on an unfolded scroll, are also stacked but they cannot land on the first reel. Despite this limit, wilds are very helpful, especially when they come on reels 2 and 3, and in combination with stacked Lady Robin Hood pictures.

At any time during base game, 2 to 8 wilds may be randomly overlaid on the spinning reels and become sticky wilds. After the reels have stopped, you get a reward, taking into account the newly landed sticky wilds. Moreover, if a wild appears on the same position as a scatter, it counts as both a free games symbol and a wild.

When three Free Games symbols appear on the first, third and fifth reels at a time (in any position), you unlock the most spectacular and money-generating stage of the game. The first surprise is that you are awarded a prize of x2 times the total bet (up to $800). Then you obtain 10 free spins played on a slightly modified screen. First off, you are awarded three arrows before the feature begins.

Then, you will notice four shields, each above reels 2, 3, 4 and 5. A shield is divided into 4 sections that can be filled during free spins. When bonus spins finally begin, a Target symbol may randomly stop on the reels and give you an arrow that is then added to an empty position of a random shield. Once all the 4 sections of a shield are topped up, the respective reel, above which that shield is located, will become a locked wild reel until the end of free spins. Besides, one arrow can fill in all the four positions on a shield with some probability. All the locked wilds that have been created will remain intact for the remaining free spins.

Lady Robin Hood is a 5-reel 4-row pokie with 40 fixed paylines. The basic features are stacked symbols and wilds. The advanced features offered here are free spins with locked wild reels that are unlocked gradually as free spins progress. The top jackpot prize is $1000.