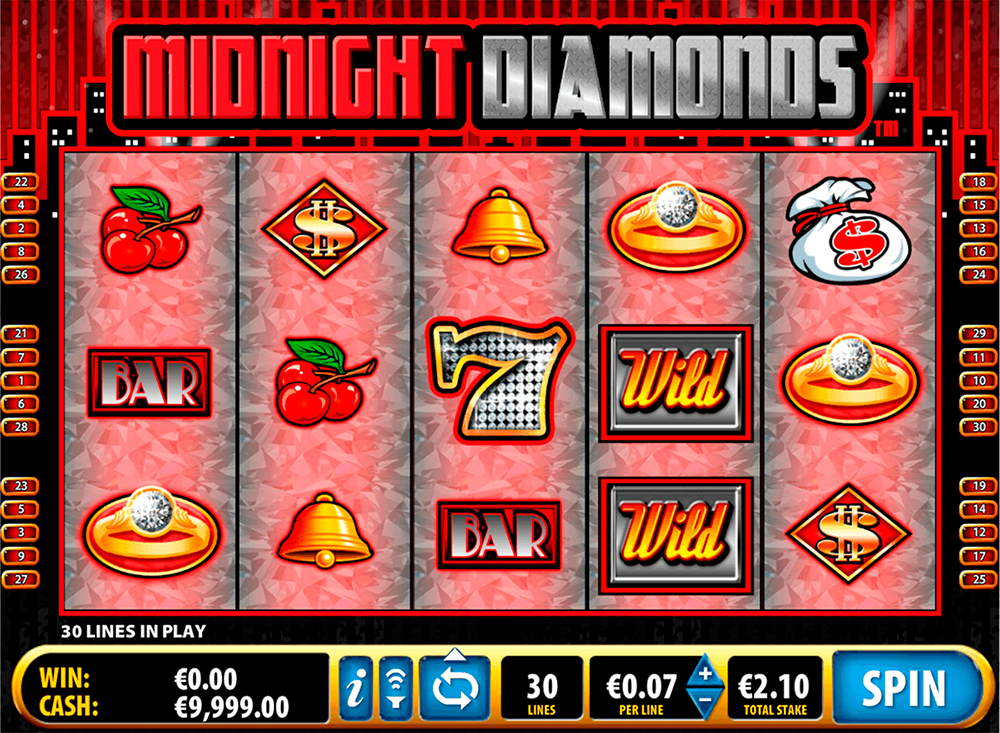 Midnight Diamonds is a 5-reel 30-payline pokie released by Bally. Having a bog-standard design, the game has some stunning features such as Diamond Stack feature, Wheel feature and free spins. Stacked wilds that sometimes come along on the screen can drastically change the gaming process and win you fortune, especially when landed on the very first reel. Punters who wager high stakes are going to like the game because it accepts the maximum of $450 per spin.

The pokie is based on a widely-used concept of pokie making: it has a 5×3 field on which 15 symbols are visible at a time. Non-feature combinations are completed when three or more of the same pictures stop on neighboring reels, beginning with reel 1. The backstage pic behind the reels shows dark skyscrapers and red lines elevating to the sky. In total, the visual dressing of the pokie is straightforward in a certain sense, it lacks modern visual effects and mind-blowing animations. But in respect to features, Midnight Diamonds will touch your feelings because its gameplay is far from being boring.

The symbols utilized here are a kind of a retro style, with the silver, white and red colors dominating the screen. You will meet the following symbols when spinning the reels of Midnight Diamonds: classic cherries, a red BAR, golden bells, a dollar sign a white coin bag, a diamond ring and a diamond seven. All of these create an ultimate vintage experience as if you are playing an old slot machine at a Vegas casino. But as distinct from those, the reviewed game has a touch of contemporary elements, for example, a package of three different wilds in base game, and a host of other bonus-related things.

Top three prizes in the pokie

At the end of each spin, symbols can get arranged in a manner to produce a payout, for example, when three copies of the same symbol appear on a payline. In many pokies, including this one, a spin can bring two or more combinations at a time, which are added to make up a total win. The three highest payouts in Midnight Diamonds are $9000 (five wild symbols), $6750 (five rings) and $4500 (five money bags). Keep in mind that any spin can result in multiple winning combinations, so a final cash prize may be higher than any single value listed above.

When you begin exploring how much you can bet in the game, you will be surprised to see that $0.01 to $15 are accepted per line. Though you cannot remove any line from play, a total bet is adjusted in a very flexible way from $0.30 to $450, and this is good news for casual players and high-rollers alike.

The role of wild symbols in Midnight Diamonds is very important, especially in free spins where wilds emerge as the centerpiece of gameplay. Moreover, there are 3 different wilds in base game. All of them are portrayed as a silver plate with an orange word “Wild” drawn on it but they differ from each other in small graphic variations. These feature symbols are interchangeable, they replace for regular imagery and also create combinations on their own. As noted above, wilds rank the highest in the paytable.

A massive white diamond is a bonus symbol. Three of these powerful symbols collected on reels 1, 3 and 5 activate a short bonus game. The reels disappear and a big wheel divided into many wedges becomes visible. You are asked to click Spin, the wheel begins rotating and then stops. The arrow at the top of the wheel will be pointing at a specific wedge, thus determining your bonus award. The Wheel contains two types of awards: money and free spins. The money values available on the wheel are 6 to 60, and they are multiplied by the total bet, so your maximum prize can reach a stunning $27,000. When a spin is finished, you either proceed to a free spin mode or take the money and return to base game.

You are awarded 8, 10 or 12 free spins, as indicated on the Wheel described above. During free spins, a certain award appears above each reel. If it so happens that a diamond symbol lands on a reel, you will receive the prize shown above that reel. The awards are of three types:

Furthermore, all wild images will remain in place until the end of free spins. If any of the reels turns into wild entirely, it will also retain its new status and stay wild along the whole length of free spins.

The bulk of interesting features is concentrated inside free spins where you can win extra wilds and wild reels that will persist until free spins are over. In base game, you enjoy a fusion of retro and modern styles with three wild symbol variants and easy access to a Bonus Wheel in which exciting prizes ($27k at max) are on offer. The game is for both retro pokie fans and the mainstream audiences.