Jewel of the Dragon Pokie

Play Jewel of the Dragon Pokie for free 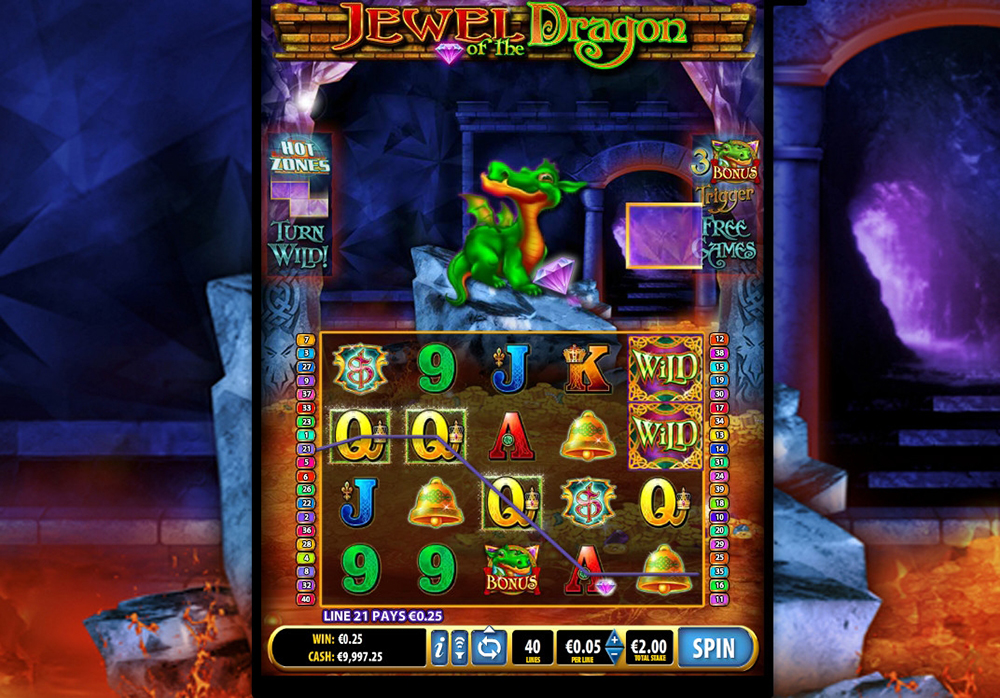 Jewel of the Dragon Pokie Review

Get ready to have an incredible voyage to a dragon’s cave where he guards immense riches and makes everyone shiver with horror. But the dragon has a weakness that will release a portion of his treasures to you. Just find this weakness and enjoy hundreds and thousands of coins showering down. This 5-reel 4-row pokie from Bally was a great success when launched by the developer in 2016. There is an innovative solution implemented in the game, and this is a Tetris-styled bonus that accompanies your normal gameplay and transforms one or more symbols into wild. This feature is represented in three variants known as Hot Zones, Drops Zones and Dragon Nudge. Some of regular symbols have small overlaid diamonds that may also bring you lots of benefits. Jewel of the Dragon is a creatively designed game that true pokie connoisseurs will give the highest ranks.

The game screen has an unusual elongated look and is divided into two parts. Below there is a 5×4 reel set, and above you will see an evil dragon holding a big pink jewel in his claws. The background picture set behind the reels is beyond all praise but the same cannot be said about symbols, which are a kind of generic, especially low-paying pics, which are common playing card icons adorned with crests, crowns and other similar things. Along with these, you will also encounter Bells, Money Shields and Crowns.

The pokie has 40 fixed paylines. Players cannot change this number but they can alter a line bet in a wide range between $0.01 and $10. If you prefer low bets, then you can wager $0.40 per spin, while high-rollers are welcome to place $400 and enjoy really huge winnings. The pokie also has a convenient autoplay functionality for more comfortable gameplay.

When exploring the paytable of the pokie for the first time, you will be surprised at how low the top prizes are. For example, five wilds pay out $1000 when hit along a payline, and this is the highest-paying combination in the game. The next down payout is $750. But do not get upset with these seemingly low prizes. The matter is that the pokie produces several combinations in a spin. And second, the pokie has lots of opportunities to trigger transformation of normal symbols into wilds, and wilds facilitate the creation of combinations, as you might know. All winning combos, save for scatters, are formed when 3+ like pictures stop on a payline starting at the leftmost reel.

Judging by the pokie’s paytable, which has a very low maximum win, the pokie certainly belongs under the group of low-volatile titles. From the very first spin, a great many of combinations will get completed within a single round. This game is for you if you like extremely low-volatility pokies.

There are over a dozen Tetris-shaped elements that may cover three or more symbol positions. These blocks are of different shapes that resemble letter “T”, “O”, “S” and etc. From time to time, one of these shapes is released onto the screen from above and falls on a random place (it can be visible completely or partially). The symbols covered by this block will turn into wild, at which point the resulting combinations are evaluated and you receive a paytable award.

Some poker card symbols on reels 2, 3 and 4 land with small overlaid diamonds. If three symbols featuring diamonds appear, the Drop Zone feature begins. You are asked to click on one of these symbols to reveal a random Hot Zone block that will then drop down and make all the symbols it covers into wilds.

It may happen that a hot zone drops completely outside of the reels but it will still be visible somewhere in the dragon’s cave. The dragon then comes to life and pushes that hot zone onto the reels with a purpose of creating a chance to complete a winning combo because the newly emerged hot zone will make all the affected symbols wild.

A smiling green dragon is a scatter Bonus symbol that triggers free games if three or more appear in any place on the reels. Moreover, free games can be activated by three or more original wilds, i.e. the wilds that landed on the screen before any hot zone-induced transformations took place. The feature is non-retriggerable and it lasts for 8 free spins regardless of the number of activating symbols. In addition to free spins, a player gets an instant reward of x1, x2 or x5 times the total bet (up to $2000 at max – this is the best real money prize the pokie can potentially pay). Hot Zones is the only wild-related feature available during free spins so you may come across a plethora of winning opportunities driven by hot zones.

Bottom line on Jewel of the Dragon

Jewel of the Dragon is distinctive from 99 percent of other pokies because it has a unique method of awarding wild symbols, based on the ideas of Tetris. This is the game where no single combo will win you a fortune; instead, an amount won consists of a number of small wins from numerous combos hit a time. The top loot of $2000 is generated by five scatters.