Hand of the Devil Pokie

Play Hand of the Devil Pokie for free 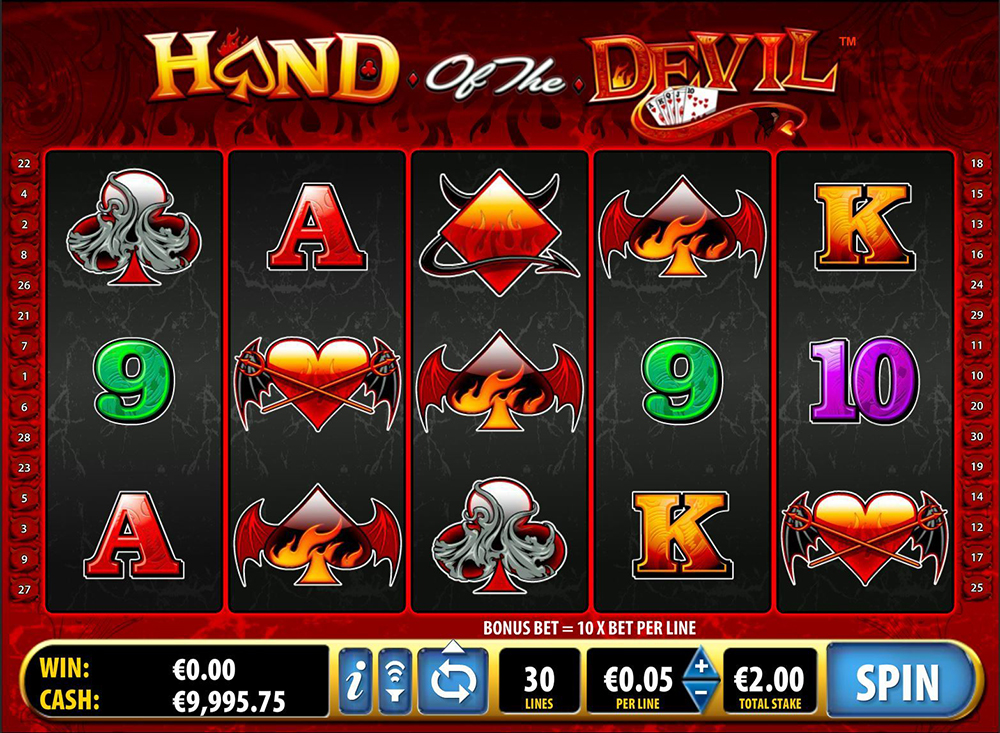 Hand of the Devil Pokie Review

Full house, four of a kind and even royal flush cannot beat a hand of the devil, the highest-ranked hand in the reviewed pokie from Bally. Once you see a symbol depicting four aces of hearts and a ten, you will get a x5 multiplier. The pokie has a distinctive poker game feeling and is played over 5 reels and 30 paylines. Features include free spins with locked wilds, scatters and normal wilds. Hand of the Devil is an exciting video pokie that will impress you favorably with nice graphics and frequent wins. If you succeed in obtaining a big wild multiplier in free spins, the final reward can be very impressive.

Set against flaming red fire, the reels seem to be situated in the underworld inhabited by departed souls. Red, black and orange are the dominant colors used in the pokie palette, and the design of symbols reflects nicely the devilish theme. Card suit symbols used in the pokie are creatively decorated with minor details that add even more thematic touch to the game.

A symbol set includes a generic package of Bally’s playing cards 9 to A with very little redesign to suit the theme. Cards will award you up to $500 for five of a kind. Along with these low-paying pics are card suits that award higher. The suits comprise a Heart with crossed pitchforks and black bat’s wings, a Diamond with devil’s horns and tail, a Club with some abstract smoke-shaped pattern and a winged Spade aflame. These four suits have uniform payouts for 3, 4 or 5 of a kind. For example, hitting five Diamonds will award you up to $2000 at max, which is the same as five Hearts or Clubs or Spades.

As the pokie features 30 paylines, you would suppose its min/max bet starts at $0.30 but instead you are going to spend $0.40 per spin since a mandatory side bet of 10 coins is taken from your coin balance automatically. This additional expense is required for you to get access to a free spin feature. So if you don’t mind betting some extra money, you can recover your bet handsomely as a result of free spins. The maximum bet in the pokie is $400 per spin.

The icon representing the wild symbol is fire flames with the word “Wild”. This special symbol can sub for other symbols and help them create winning combos. Although wilds are not able to pay wins directly, they are very helpful in the game because they come in full stacks. A digital pokie reel is actually a 2D “band” divided into multiple frames, much like a physical photographic film. Generally, identical “frames” (symbols) never border in vertical directions, except for stacked symbols, which join one another on a reel and create what is commonly known as a stack. In Hand of the Devil, the wild symbol is stacked. When the reels stop, two or three wilds at a time may become visible on a particular reel, meaning there can be numerous wilds after a given spin. The only limitation to these special symbols is that they appear everywhere, other than the first reel.

The Hand of the Devil logo is a scatter. It triggers 10 free spins when three or more appear on the reels. Scatters are special symbols and they are governed by other rules of payoff calculation. They count towards a winning combination in absolutely any position. Besides, you get an instant scatter pay of up to $4000, and this is the highest prize offered in the pokie.

Before bonus spins begin, you are granted one of five wild varieties to be active throughout the feature. Each wild depicts a unique five-card hand and has a frame of a certain color: a red-framed wild is a mere substitute and grants no multiplier to payouts, a purple wild doubles payouts when substituting, a green wild triples payouts, a blue wild increases your win by x4, and an orange wild increases payouts by x5. Only one wild type is awarded to you. Whenever a bonus wild icon lands during free spins, it will get fixed in its position until free spins expire. Therefore, the number of wilds visible on the reels can increase progressively with each new spin and this can lead ultimately to huge coin rewards. The only weak point here is that free spins cannot be retriggered.

Bottom line on Hand of the Devil