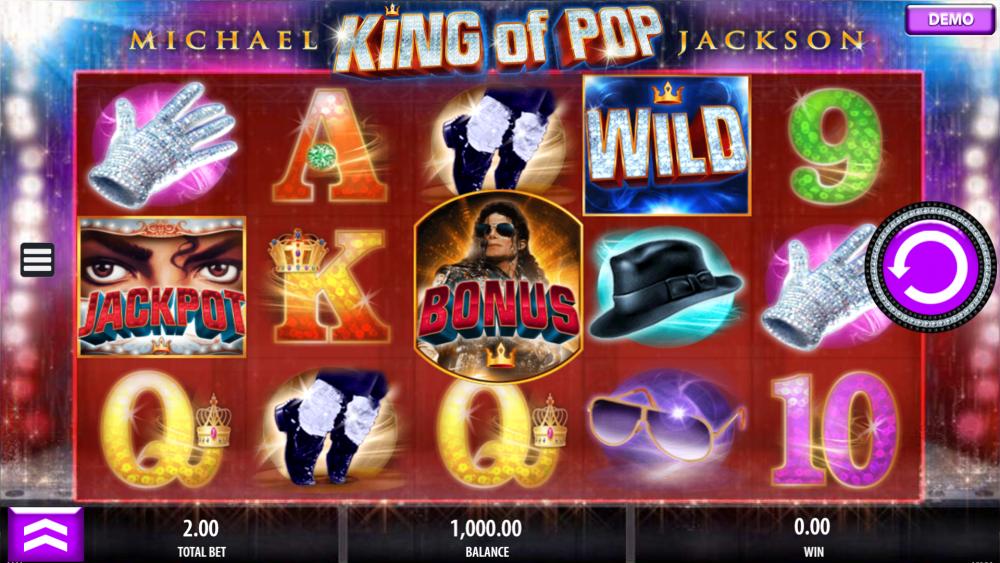 The legendary singer who left a mark as the unmatched King of Pop is still alive in our hearts and his music is still worth listening to. Michael Jackson is recognized around the world and his legacy included over a hundred top-charting hits, some of which are played lightly in the background, sending shivers down the spine. The 5-reel 25-payline pokie is packed with thematic features that will make you recall the superstar, who was a part of our lives for several decades. Along with Moonwalk Wilds, Stacked Wilds and free spins, you can win the megacool fixed jackpot of $200,000. It’s impossible not to fall in love with Michael Jackson’s music all over again and this pokie from Bally is another tribute to the immortal music of that globally acclaimed singer and entertainer.

Everything in the pokie design is made to remind you of Michael Jackson. The animated background with light shower looks really cool with sparkles bouncing against the floor and sprinkle all over the stage. The pokie has a standard set of 5 reels and 3 rows, and its symbols do include common playing card values from 9 through A. These generic symbols are covered with shiny glitter, much like his legendary outfits and burlesque fancy clothes. These low-paying symbols award you the maximum of 100 coins for five of a kind.

Other regular symbols include Michael Jackson’s black loafers (120 coins), iconic sunglasses (150 coins), a black fedora hat (200 coins) and a sparkling sequin glove (500 coins). Bet options in the pokie include a line bet that is changed between $0.01 and $2 per spin. But the minimum bet is not $0.25 as you might suppose. The matter is that the pokie features a mandatory side bet that is taken automatically from your balance when you adjust your preferable stake. The side bet equals to a line bet times 10, therefore, the minimum acceptable bet starts at $0.50 and reaches $80 per spin.

How to win enormous fixed jackpots?

The pokie has a Jackpot symbol showing a close-up view of Michael Jackson’s eyes. This is a scatter symbol and it counts towards a combination when two to five of them are landed in any place. Two scatters will double your bet, three scatters award you up to $4000, four scatters bring you a healthy $40,000, while hitting five scatters in any position within the screen awards a hefty $200,000, provided you have placed the top bet on that winning round.

The word “Wild” encrusted with sparkling white jewels substitutes for regular pictures and completes combinations by itself. Five of them landed on a payline award you up to $1000. When being in base game, there is a chance that two random reels become fully wild. In this case, you can win a generous reward, especially if the feature affects the first and second reels.

The moonwalk, one of MJ’s signature moves, was introduced to the public over 35 years ago and it was a real sensation because it was like he was floating on water backwards. In this pokie, you can look back at his famed performance of Billie Jean in 1983 and remember the times when Michael Jackson performed the first-ever moonwalk to the public. When playing the pokie, you will see special Moonwalk Wilds that can appear randomly on reels 2-5 and substitute for regular icons. The best thing about these wilds is their ability to double payouts when substituting. Besides, there can be up to 5 of them on the reels at a time.

Three Bonus symbols on reels 2, 3 and 4 trigger a Wheel bonus where you can win free spins or instant cash. You are awarded one spin on the wheel of fortune that is segmented into 18 spaces. After the wheel comes to a rest, you can win up to 1000 coins, get access to two free spin modes or get an additional spin on a Multiplier Wheel. The latter can multiply your bonus wins by x2, x3, x5 or x10.

This bonus mode can be won only during a Wheel Bonus session. If this happens, you receive 10 free spins. Any wild symbol that lands in view remains in place until the end of the feature. The only downside is that wilds cannot land on the first reel but availability of sticky wilds that persist for the entire duration of free spins gives you great chances of hitting a valuable winning combo.

If the bonus wheel pointed at the Smooth Criminal feature, you are awarded 5 free spins with cumulative wild reels. During the first spin, the rightmost reel becomes fully wild. On the next spin, reels 4 and 5 become wild. On the third spin, reels 3 and 4 are wild, etc. Finally, on the last spin you will see reels 1 and 2 turned into wild altogether. This stunning feature can lead to huge wins, especially during the final few spins.

The Michael Jackson pokie from Bally has 5 reels, 25 paylines, a forced side bet and the maximum jackpot win of $200k. During base game, you can win a wild multiplier x2 and see stacked wilds emerged on random reels. A spin of the Bonus Wheel would grant you 5 to 10 free spins or a cash prize. Michael Jackson and all fans of interesting features are strongly encouraged to play this alluring game on their desktop or mobile devices.