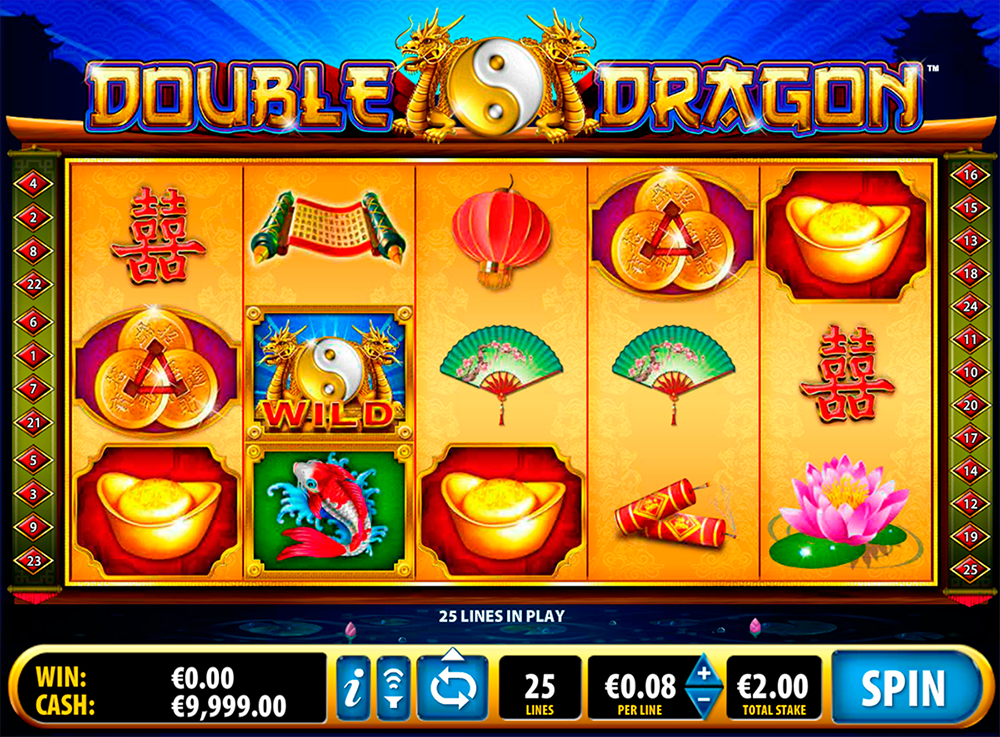 Bally Technologies have developed many games on oriental themes and Double Dragons is one of these titles. It has a pronounced Chinese culture focus and lots of theme-related symbols. The game has a standard number of 5 reels and 25 paylines but it has an exciting mathematical model that very few pokies of today have. What is meant here is a “Pay Both Ways” model. Another interesting feature applied in the pokie is connected with wild symbols that expand on the entire reel and launch up to 4 respins.

The pokie design reflects the Chinese theme accurately. The reels are located against the blue sky with silhouetted pagodas, and the yellow reels are placed between oriental-styled decorated columns that might belong to some religious building. Design-wise, the game is fairly simple, with plain 2D graphics and non-impressive animations, but gamblers who appreciate good wins and captivating gameplay will be satisfied with the pokie because it does have interesting bonus content.

Bally have eschewed infamous playing card icons in favor of themed pics, and this is a good move because now the entire package of symbols is associated with the Chinese culture, traditions and myths. On the reels you will come across the following symbols: Crackers, Fan, Lantern, Double Luck hieroglyph (the four symbols pay out the maximum of $500 for five of a kind), Scroll ($500), Lotus ($800), Coins of Luck ($1000), Jade ($1200), Golden Ingot ($2400) and Koi Fish ($5000). The winning values are specified, assuming you play at the maximum stake.

Unlike regular 5-reel pokies, combinations of symbols can run from left to right and in the opposite direction, and each direction will equally result in payouts if 3 or more are on a line. There are many winning opportunities on top of that, because the pokie is equipped with 25 paylines on every round. Given that the game pays both ways, the 25 lines mean actually the same as 50 lines, that is why winning symbols come up on multiple lines more often than in regular “one way” pokies.

For example, three Coins of Luck landed on reel 1, 2 and 3 along an active line, and Jade symbols appeared on reels 3, 4 and 5. The resulting payout will be $2200 for two combinations, should you have placed the maximum bet on that winning round. Thanks to the Win Both Ways mechanics, you can win twice as much on each spin in the pokie.

The pokie has some grand bets on offer enabling you to wager between 25 cents and $500 per spin. The number of paylines is always fixed which means you cannot reduce your bet down to 1 cent. Playing at the maximum stake, you may count on big payouts, especially upon entering a bonus feature described below.

The wild symbol is represented by a yin and yang emblem, one of the most important concepts in Chinese philosophy. It serves as a substitute for all symbols that are found in the pokie. Besides, wilds have the power of completing combinations independently of other symbols. Hitting three, four or five of them on a payline will see you win up to $5000. Along with being the highest paying picture, wilds are also involved in a profitable feature that can potentially add thousands of dollars to your coin balance.

Watch out for Yin and Yang emblems as they can bring you fortune and prosperity. When a wild appears on a reel, it activates a Dragon Wild feature. Before combinations are evaluated and paid out, the wild expands on the entire reel, after which all combinations (if any) are awarded. All reels where an expanding wild has been created are locked in place, and the rest of the reels respin one time. If another wild lands on these reels after the first respin, the feature continues and you get one more respin. Overall, you can be granted four respins until the entire screen will be filled with expanded wilds.

Double Dragon is of a rare breed of both-ways-win pokies. The central features are wild reels and respins. The maximum prize for a single combination amounts to $5000, while a bet ranges between $0.25 and $500 per spin.