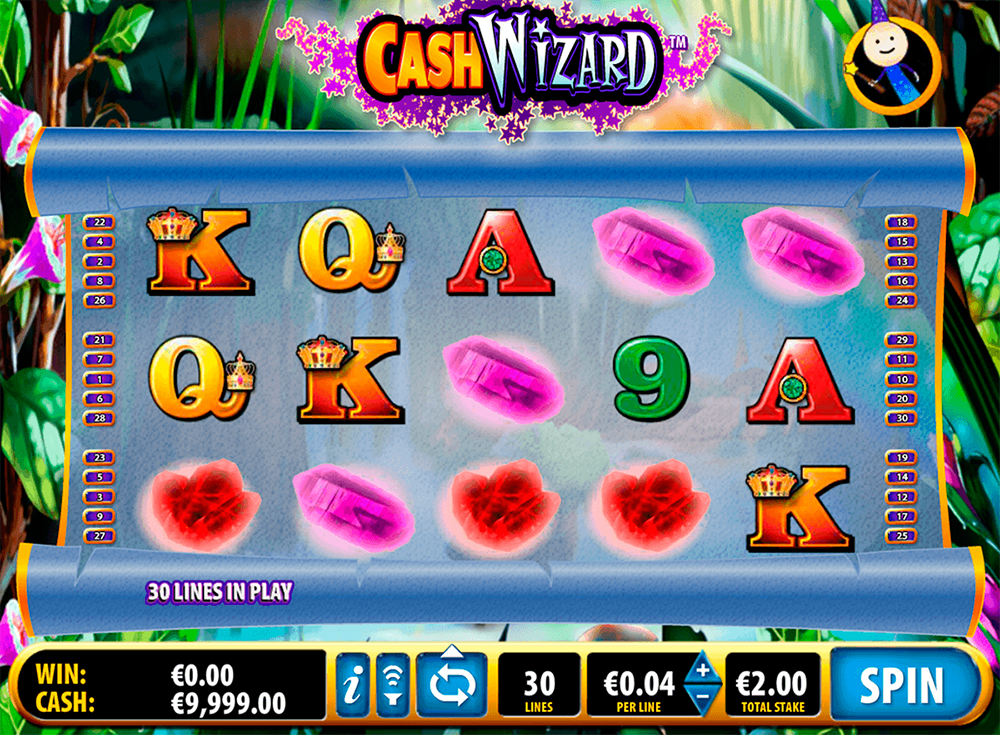 Cash Wizard is a 5-reel pokie from Bally. It has lots of enticing features that add fun to your casino experience. One of these features is a random Wizard Wild bonus that transforms up to 5 symbols into wilds. Another captivating feature is a pick to win type mini game where you are to select from seven potions with the chance of winning up to 760 coins. The pokie also boasts free spins with all prizes tripled. Spin the reels of this magical game and see the wizard waving his magic wand, turning your initial stake into a big pile of gold coins. Three fixed jackpots available in a bonus feature is an ultimate reason of why you should try this magnificent game.

Cash Wizard is based on a typical pokie design with 15 visible symbols (a 5×3 model). The game field looks like a big scroll on which the symbols rest. Behind the reels, there is some forest scenery and the wizard himself is depicted as a small smiling figure dressed up in a blue outfit adorned with stars and planets.

The visual design is eye-pleasing at large but it lacks that refinement and attention to detail as many modern pokies have. Nonetheless, players love this game for several reasons, one of which is a flexible betting system that allows for wagering $0.50 to $400 per spin. Though the pokie is fitted with 30 fixed paylines, the minimum bet does not correspond to the “one line costs one cent” rule since there is a mandatory side bet that automatically takes 20 coins from your balance. The side bet cannot be deselected – it applies automatically whenever you are adjusting a bet size.

Non-feature pictures in the pokie are represented by playing cards from 9 through A and a pack of different gems. Nines, Tens, Jacks and other card values pay out up to $2400 for five of a kind. Purple, green and red gems are more generous and award you the maximum of $8000 for five. But this is not the highest prize that you can grab in the game.

The wild icon is a simple word “Wild”. It performs its typical substitution function and creates its own combinations on a payline. If you wager the maximum acceptable stake of $400, you will receive an immense $40,000 for five wild symbols, which is the first largest reward that the pokie is able to generate.

When the reels are still spinning, the Wizard can randomly transform 2 to 5 non-feature pics into wilds. After the reels come to a rest, all winning combos that have been created (whether with the use of wilds or not) are evaluated and you get a cash prize as per the paytable.

Win a grand prize in a Mystery Wheel feature

This is a wheel of fortune bonus that starts randomly at the end of any spin. No special symbols or combos are required to get the bonus triggered. You get it absolutely at random! On the second screen, you see a big wheel divided into numerous sections, each indicating a certain prize that you can win. You are asked to click Wizard to stop the wheel and determine your prize. You receive one of the following prizes according to where the arrow points after the wheel has stopped moving:

Their amounts correlate to your total bet and are calculated as follows: Wand Jackpot equals your total bet times x50, Dragon jackpot will give you 100 times as high as your initial bet, and Wizard Jackpot provides a 200 times payout. Let’s assume that you are playing at the top stake and the arrow landed on the Wizard jackpot space. In this scenario, you obtain a tremendous $80,000 money prize.

The picture showing a scroll and bird’s feather is a feature symbol that lands on the central reel. When this occurs, you are prompted to click that symbol to reveal your award, which varies between $1 and $8000, depending on your bet.

Poison vials are bonus symbols that land on the first, second and third reels. Hitting three of them gains you access to a bonus feature played on the second screen. You will get presented with 7 ancient vases excavated, glued from pieces and restored. You instantly get a reward of 10 coins for just entering the feature. You are then asked to start picking the vases to reveal a cash prize. You keep picking them until you find the vase that contains a cursed potion instead of money, at which point all the collected bonus money is awarded and the feature ends. Your total prize per bonus ranges between x10 and x760 the total bet.

A free spins feature can be triggered in two ways: by hitting three scatter symbols on reels 2, 3 and 4 at a time in base game, or as an outcome of a Mystery Wheel feature when the arrow points at a certain number of free spins. You are awarded 15 free spins if the feature is started by dint of scatters. All wins are calculated at three times the normal pay.

Cash Wizard is a beautiful magic-themed pokie with 5 reels, 30 paylines and lots of bonus features and mini games including Wizard Wild feature, Cursed Potion, Mystery Wheel and Invisible Ink feature. The pokie also has free spins and three fixed jackpots, the highest of which will grant you $80,000 at max.