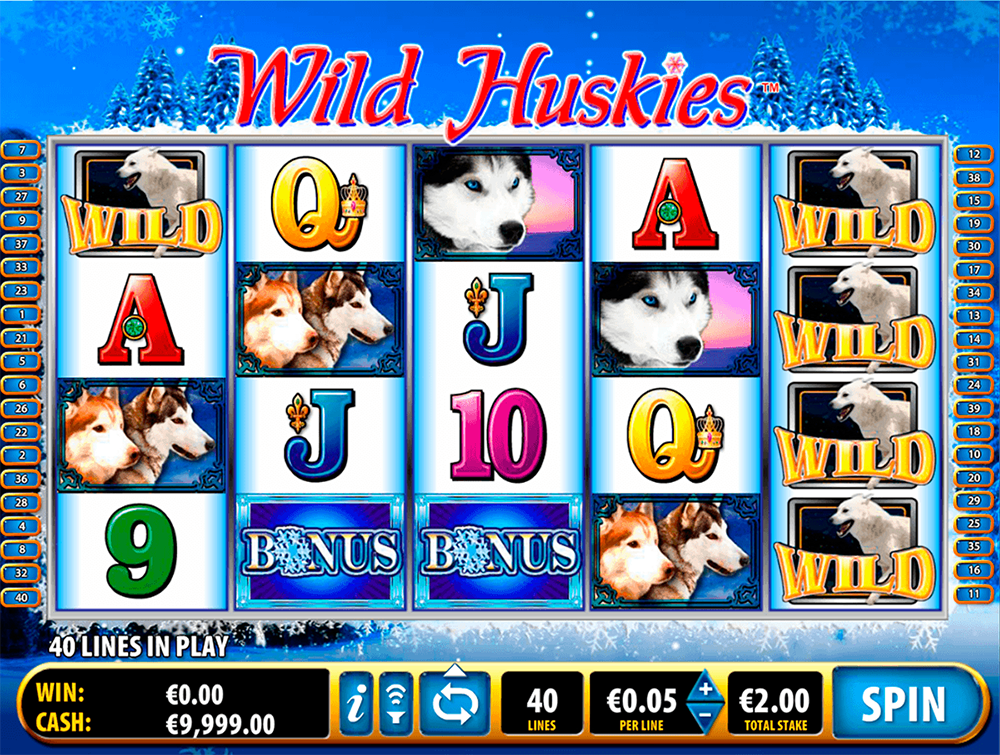 Wild Huskies is a 5-reel 40-paylines video pokie with its theme centered around a dog breed known as huskies, which are used in Alaska, Siberia and other northern regions. The pokie is fairly simple in terms of features but it is still able to surprise you with a sudden stack of wilds on the first reel or an almost infinite flow of free spins. Having a giant maximum bet of $400, the pokie provides plenty of opportunities for big wins such as $25,000 for hitting five wilds. The pokie has an interesting and rare theme but feature-wise, this is an average pokie with solid gameplay and good wins. If you are tired of gimmicky, graphically rich 3D games, try this simple game and enjoy it on your computer or mobile device.

Wild Huskies has an extended 5×4 field with 20 pictures visible simultaneously. The white-colored reels are set against the wintry wood covered with snow. Behind the reels, you can see snowy fir trees and snowflakes swirling in the sky. Nearly half of all symbols in the pokie belong to standard card values that look the same as in other pokies. Cards 9 to A are at the bottom of the paytable, meaning you will often see them on the reels winning you small amounts.

The remainder of the symbols are designed to fit the dog and winter theme; these include Snowflake ($2000 at max), Husky ($2000) and a Pair of Huskies ($2000). There is also a wild symbol that depicts a husky and it will be described in detail in a dedicated section. Actually, payouts are distributed rather uniformly across symbols, as exemplified by the thematic pictures. Winning combinations count in a traditional way: from left to right, beginning from reel 1.

Bally makes no claims to originality when developing bet options and a user interface for its games. As in many games from this provider, Wild Huskies has a typical bet range of $0.40 to $400 per spin, and its interface below the reels is somewhat overused. Anyway, this lack of originality has a positive side: Players will not have a rough passage when learning the basics of Bally’s pokies because their UI and bet principles are nearly identical.

The game is suitable for players who like low- or medium-volatile pokies. In forthright terms, volatility is a descriptive (abstract) value showing how winnings are distributed within a certain amount of spins. In pokies with low volatility, payouts are granted very often but they tend to be smaller. High wins occur very rarely, still there is always a probability of hitting one.

A snow-white husky with the word “Wild” at the bottom is a wild symbol. Surprisingly, these symbols are of frequent occurrence in the pokie, largely due to their being stacked. The wilds perform two important functions. First, they replace regular symbols and help them complete combinations. Second, wilds also form combinations, and seeing 3+ on any active line pays out the pokie’s first prize worth $25,000 at max. This is the most desirable prize in the game and you have every chance to get it because wilds come in stacks.

These stacks can manifest themselves in their entirety, with four of them stopping on any given reel. Alternatively, a wild stack can be visible partially (1, 2 or 3 at a time), while the rest of the stack is hidden beyond the upper or bottom edge of the reels.

A Free Games icon triggers the same-name bonus if three of them hit on the first, third and fifth columns simultaneously. You are awarded as low as 3 free spins during which all wins get tripled, therefore, hitting five wilds in free spins will bring you up to $75,000. The feature can be prolonged thanks to a One More Free Game special symbol that lands exclusively during the bonus feature. Each special symbol stopped in any place adds an extra free spin to the total counter.

This is a very simple game played on the same screen as the reels. The Pick round is triggered when three Bonus pictures appear on the three central reels. Each Bonus symbol turns into a question mark tile and you are asked to pick any one of the three question marks. The icon of your choice then flips over and reveals a money prize of x3 to x100 the total stake, which is equivalent to $40,000 at the maximum stake.

This is a 5-reel 40-payline pokie released by Bally Technologies. Features used in the game are stacked wilds, retriggerable free spins with a multiplier of x3, and a pick bonus with the potential reward of x100.