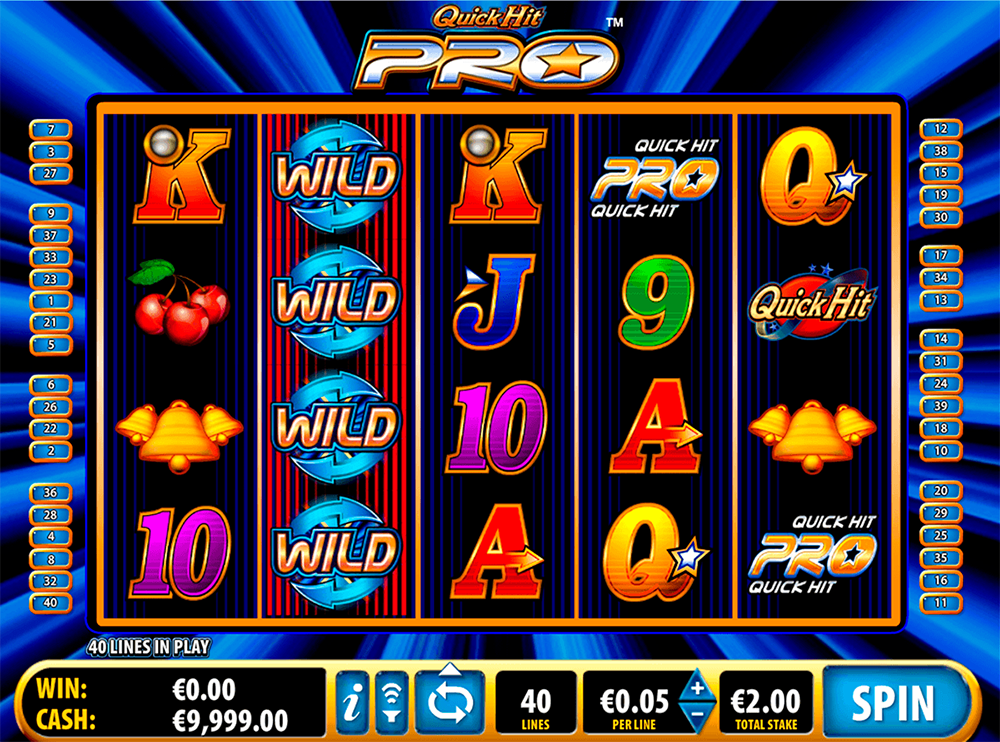 Quick Hit Pro is a game for true PROfessionals who know how to deal with 5×3 pokies and now want to tame more exotic 5×4 games that offer more enticing and intricate gameplay. The reviewed title is part of a massively popular Quick Hit series that is widely known for its impressive jackpots. As against other games of the collection, Pro has an enlarged game field and stacked wild icons that not only add fun but also increase your wins dramatically. Another incentive for you to try this excellent pokie is a brand-new Prochinko bonus round that will make you acquainted with a Japanese game called “pachinko”. The much sought-after jackpot prize is $600,000.

All the games inside the Quick Hit collection retain many common features, yet each one has some unique properties that stand out. Unlike other Quick Hit pokies, this one has a slight Japanese twist that manifests itself in a Pachinko Free Spins bonus. Design-wise, there is a simple blue, white and black colored background with radiated lines, and the symbols belong to a classical tradition. You will experience some vivid, exhilarating play with lots of winning chances, as the reels spinning ardently will finally stop and produce reel-high stacks of wild symbols.

The mathematical model used for win calculations is fairly standard. A player needs to land exactly 3 or more like pictures on an active payline without any exceptions for high-valued regular pics. Combos count beginning from reel 1 rightwards – actually, the model is the same as you are used to see in the majority of 5-reel pokies on the market. Symbols utilized here are the following: playing cards 9 to A (the maximum award is $1000 for five of a kind), Cherries ($2500) and Bells ($2500).

There is only one bet option available for players. By altering a bet per line from a cent to $10, players can set a stake at $0.40 to $400 per spin. High-rollers are given a warm welcome in the pokie but stingy gamblers will also feel at home betting as low as a cent on each line. Jumping ahead a bit, it’s worth noting that high bets lead to proportionally high wins, and this is particularly so with grand fixed jackpots, the highest of which reaches $600k.

Lots of electrifying action is waiting for Quick Hit Pro players thanks to stacked wilds that avalanche the screen very often. Groups of wilds contain 2 to 4 symbols so a reel may be covered by the same wild symbol entirely, thus opening up prospects for even higher wins. Not only do wilds substitute but also create combinations on their own. Hitting five wilds on any line will see you pocketing $10,000 at the max stake.

The pokie is equipped with two scatters. One is a jackpot-trigger (to be reviewed below) and another is a normal scatter that counts in any position and pays out when 3, 4 or 5 of them appear in any place. The max scatter payout is set at $2500, which is not bad considering how much you can potentially grab as in jackpots.

A Quick Hit logo is a jackpot symbol that appears stacked, like wilds do. A combination of scatters may consist of any number of them, beginning with 3 and going up to 11. Prizes for 3 are quite modest, just x1 the total bet. The more scatters are visible at a time, the higher your reward, and once 9, 10 or 11 of them hit the screen, you will get an astounding x250, x750 or x1500 the total bet ($100k, $300k or $600k, accordingly). What’s more, jackpot scatters are also available during free spins.

Free games are always a desirable play mode for everyone, be it a first-timer or seasoned pro. The reason is obvious: you pay nothing for the duration of the bonus and get real-money wins. In this game, free spins are a very alluring target, since they come with a unique bonus that follows free spins. Getting 3 Free Games pictures, you are awarded exactly 15 Prochinko free spins, during which some symbols come with small metal balls overlaid. These balls are collected until the feature ends.

At the end of free spins, if 1 or more balls are harvested, you proceed to a special Prochinko bonus game. The word “Prochinko” derives from a Japanese pinball-styled game known as a pachinko, one of the most ubiquitous games in Japan. You keep all the winnings earned during free spins and have a great chance to augment what you have won.

The player is asked to pull down a small lever to release pinballs one by one. Each ball drops through a maze of pins and finally lands into one of seven pockets worth some multiplier (x1, x2, x3, x5). After all the pinballs have been played out, you get the total award that represents the sum of all multipliers won.

This is a 5-reel 40-payline pokie with superb jackpot amounts, the maximum of which being $600,000. Other features include stacked wilds and free spins with a one-of-a-kind Prochinko bonus that multiplies free spin winnings many times over. Bet sizes of $0.40 to $400 are suitable for every budget and betting habit.