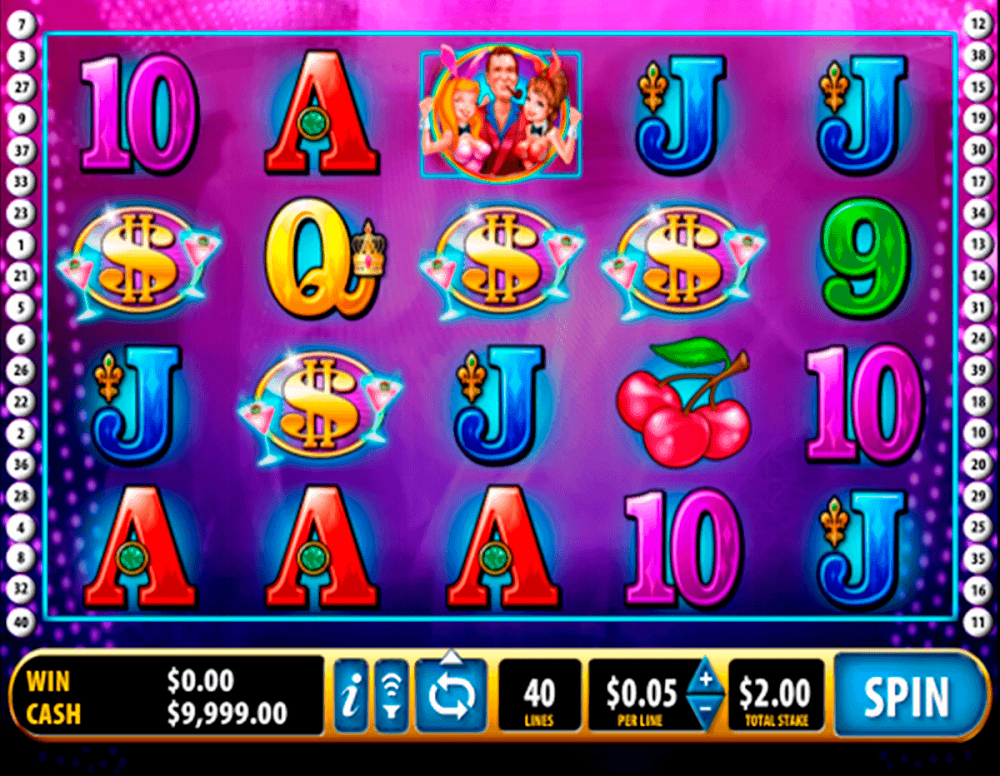 The catalog of Bally’s games contains some of the world’s most acknowledged brands such as Michael Jackson, Cirque du Soleil and Pawn Stars. And now it’s time to wow the public with an incredibly popular brand name that molded the era of 50s and beyond. Inspired by Hefner’s Playboy empire, Bally have developed this 5-reel video pokie that has a unique Hot Zone feature. This vibrant, seducing and eye-catching pokie will definitely grab attention of male gamblers who will please their eyes with beautiful bunnies and fill their wallets with massive wins. The game has a generous free spin feature and the first jackpot of $10,000 up for grabs.

You will hardly find a man who does not know what Playboy is. With this cult magazine, Hefner has erected a colossal monument to love, sex and lifestyle. Playboy is far more than a mere publication of nude photos; it also features short stories written by contemporary writers, color cartoons of notable artists, interviews with celebrities and other content of this kind that feeds in to the notions of hedonism and easy-going lifestyle. In this pokie, you will see black-tied Hugh smoking a pipe and standing with four dancing bunnies.

The game in question has an exclusive enlarged screen split into two. The lower part contains a set of 5 reels and 4 rows with tiny payline number markers on both sides, and the upper part is just for fun as it has no specific game-related functions. Designed in shades of purple and blue, the game field tries to reflect a playboy style but the problem is that Bally, for some unknown reasons, incorporated their common card values (9, 10… A) that look a bit inappropriate despite so many fabulous things in a long history of the magazine. These card values are backed by retro pictures of Dollar Sign and Cherries, which are medium-pay pics.

Hugh Hefner hugging two bunnies is the highest-paying regular symbol with the maximum payoff of x800 times a line bet (or $8000 if your stake is the highest acceptable).

The pokie’s format is a bit unusual for the pokie market in general but nothing exceptional for Bally. It uses a 5×4 model with 20 visible symbols. Such a big field requires many paylines so players can win reasonably often. In the reviewed game, there are 40 paylines that are always activated. The player can manage a bet size by changing a line bet value from the minimum of one cent to the highest figure of $10, therefore, a spin bet ranges between 40 cents and $400.

The method of calculating winning combinations is standard. When three or more copies of the same symbol stop on a payline, you get a win. All combos need to start from reel 1 and run without interruption. The only exception is a scatter that counts in absolutely any place when visible on the reels.

A strong element of uncertainty and suspense is added to the game with Bally’s signature Hot Zone feature. Imagine a Tetris block. It can be of different shapes and consist of three or more cubes. While playing the pokie, you can sometimes see differently-shaped Tetris-like blocks, called a Hot Zone, materializing above the reels, at the top section of the elongated game screen. A block falls onto the reels as an overlay and turns the symbols that it covers into wild. In most situations, the feature leads to multiple winning lines and lucrative wins, especially when a Hot Zone covers one or more symbols on the first and second reels simultaneously.

You should expect to see an enchanting spectacle when numerous normal symbols turn into wild. This is a highly profitable game element because wilds (depicted by the word “Wild”) are the best payers in the pokie. Having five wilds aligned on any active betline awards you $10,000 at the maximum stake.

A Bonus symbol, with letter “O” stylized to resemble the distinctive rabbit logo, triggers a free spins bonus. To enter the feature, you need to get 3+ of them in any position. There are three possible free spin modes: 8, 10 or 20 spins; this depends on how many Bonus symbols have activated the feature. As a pleasant addition to freebee spins, you are paid an instant prize of x2, x5 or x10 the total stake. If betting the pokie’s maximum, you would grab $4000 for hitting five scatters. During the feature, Hot Zones fall more often than in base game.

When in a free spin mode, you will see a mind-blowing wild extravaganza on almost every spin. Whenever you get a big win, a red-haired bunny in brown stockings will appear in front of your eyes riding on an oversized champagne bottle.

Bally made a great deal buying a license to represent the Playboy brand in the reviewed pokie. The game has three major highlights: eye-catching pictures of Heffner and pin-up models; an exclusive Hot Zone feature and a long, vertically stretched game screen. The maximum payout the game can potentially produce is $10,000. Bet options ($0.4 to $400 per spin) are suitable for both low-rollers and high-rollers alike.