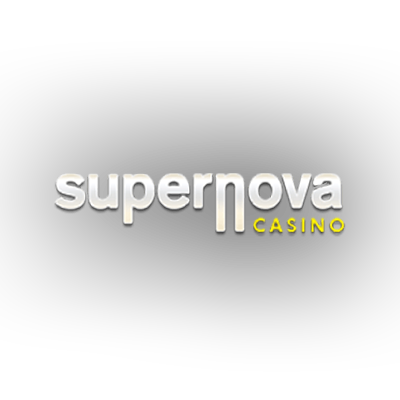 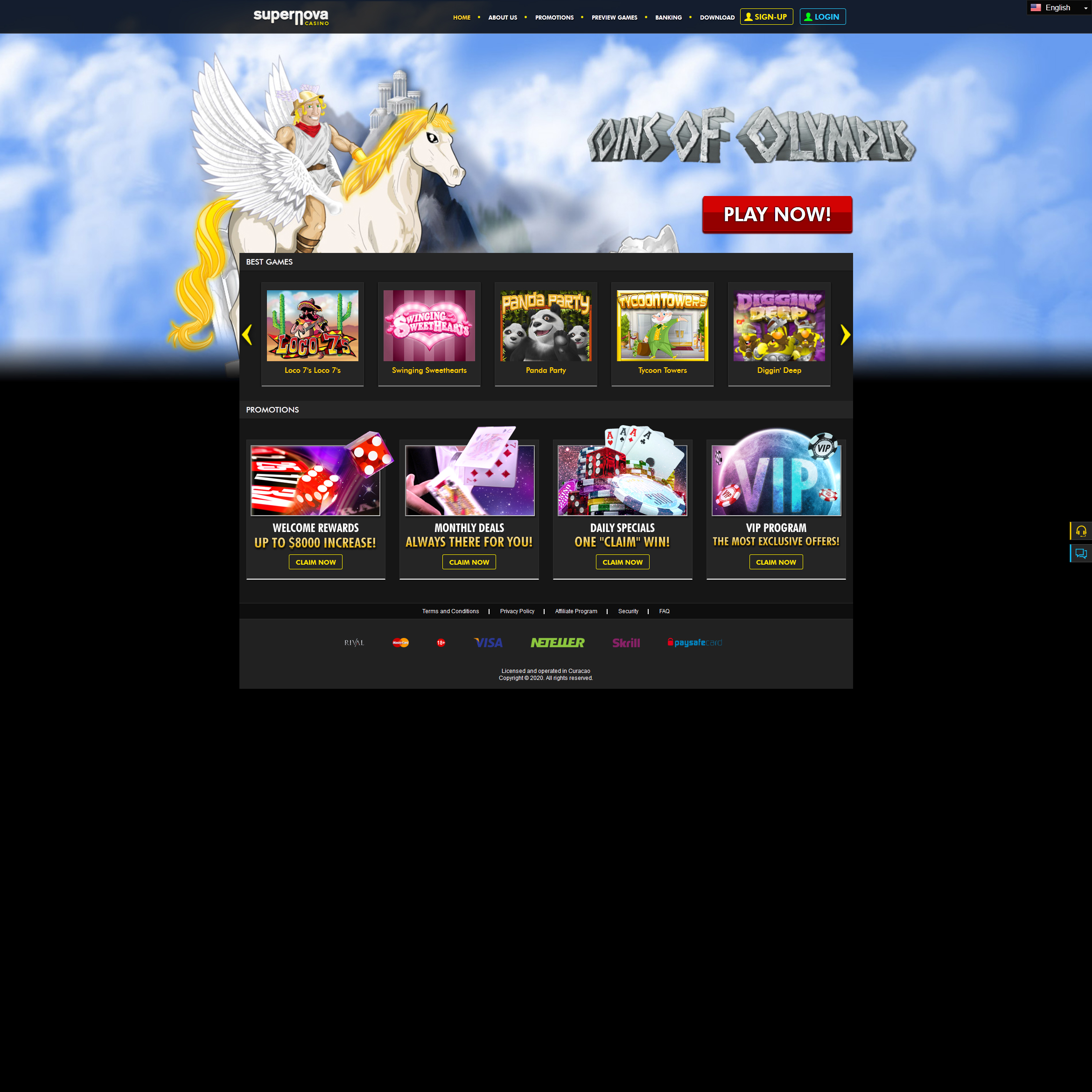 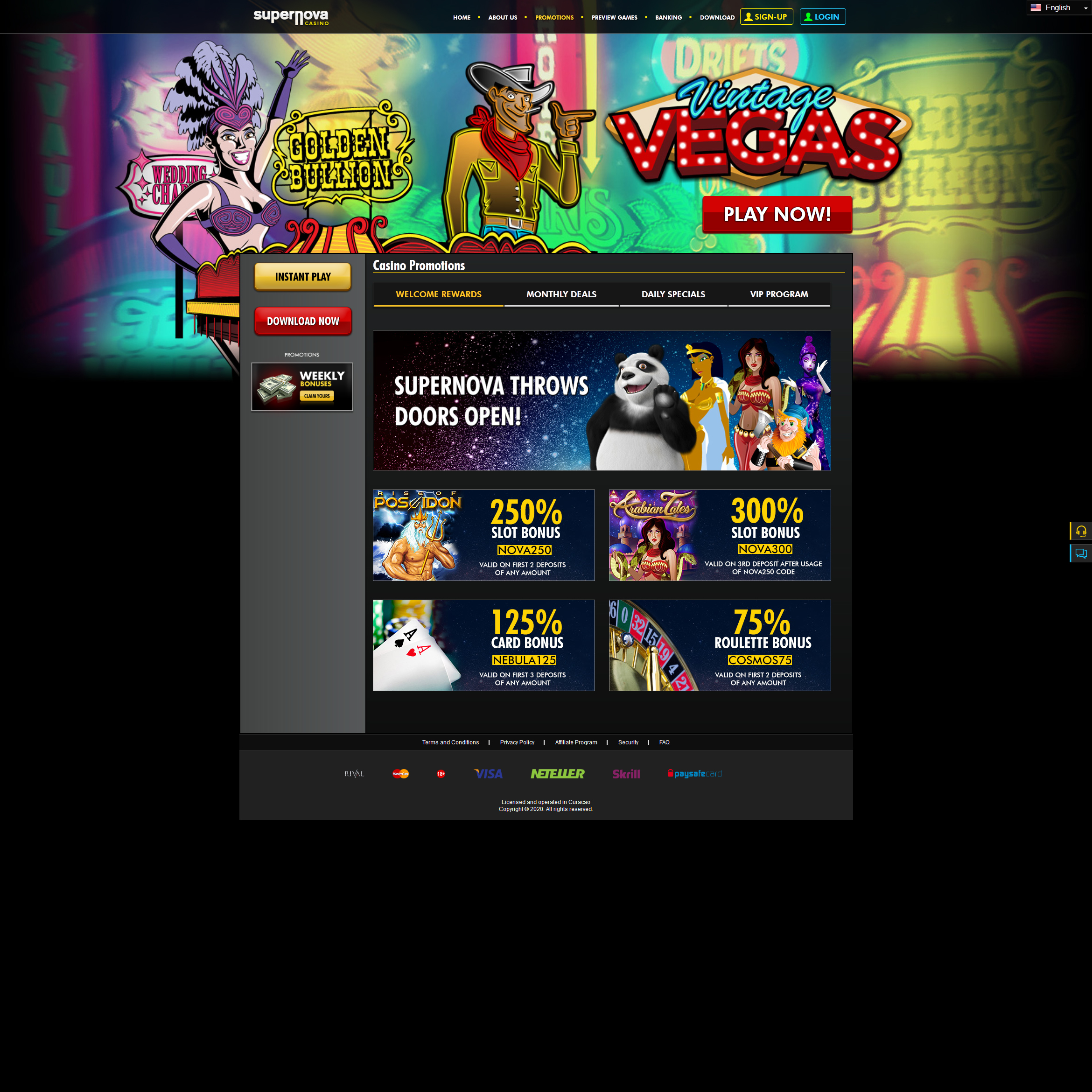 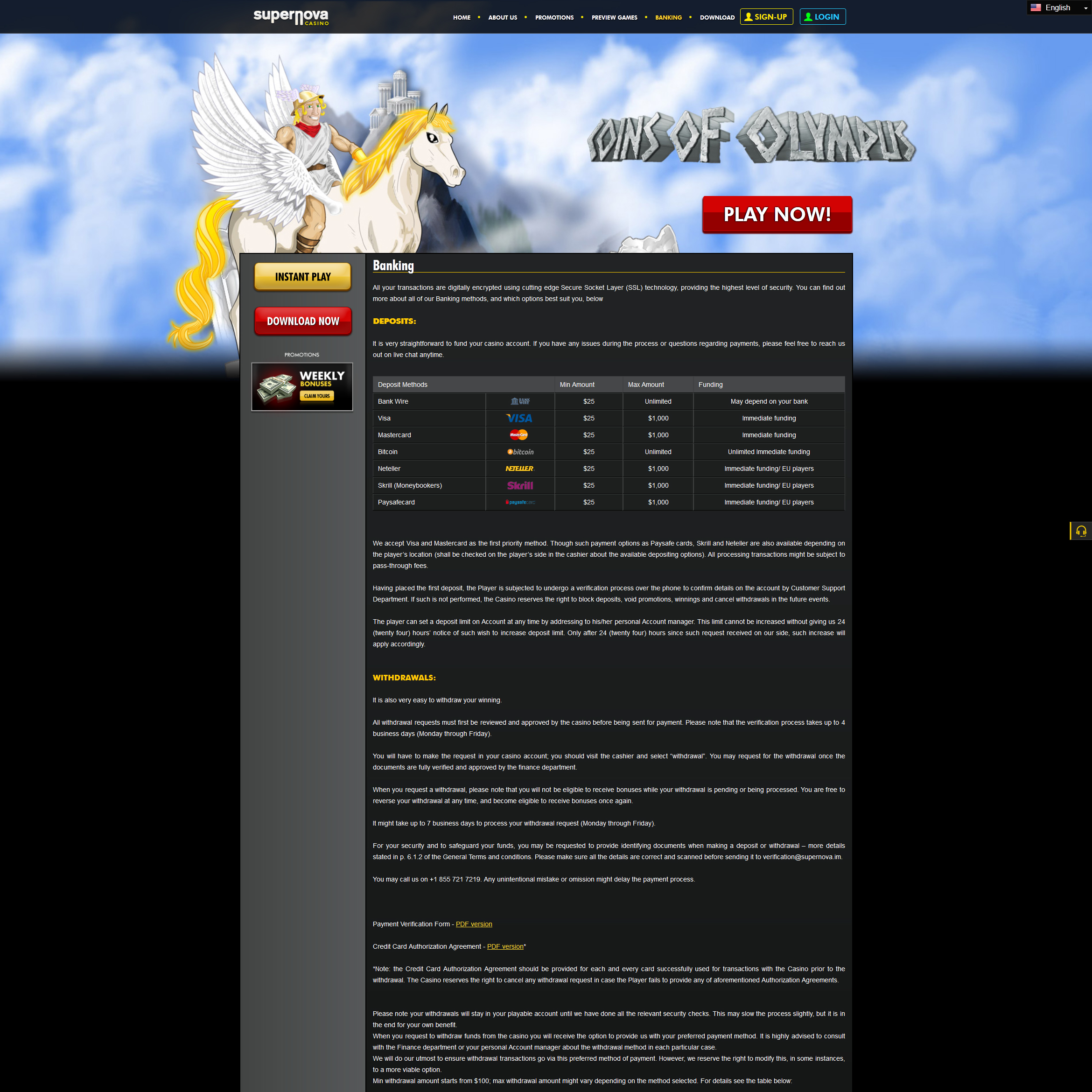 Guests from Australia are encouraged to visit the online casino named after an astronomical object that explodes and shines brighter than hundreds of normal stars taken together. Supernova is a brilliant, original online casino that features non-mainstream design and is centered around space traveling. Powered by Rival Gaming, the casino has over 300 unique games on board and also offers a pack of splendid monthly deals, weekend promotions and other admirable bonuses. Banking methods are comfortable for Australians and Bitcoin users will be happy to fund their accounts with this cryptocurrency. Reliability of Supernova Casino is beyond dispute when it comes to withdrawing money, which is already evidenced by many AU gamblers. Established in 2016, the casino is licensed in Curacao and has a positive track record for providing hassle-free entertainment and fun for registered Australian players.

Supernova Casino has an inspirational modern website with minimalist navigation that sets it apart from the competition in style. It has a strong but limited black color palette and pronounced cosmic graphics on almost every page. Stars, nebulas, asteroids and other celestial bodies as well as astronauts dominate the casino’s landscape and create an unmatched atmosphere. Design-wise, the casino is perfect and nearly exceptional. In terms of games available here, Supernova Casino has a complete range of games that Rival has developed by today. Gaming is possible in a browser or software that needs to be downloaded from the casino first. Note that some activities, for example, tourneys, are active in the software only.

The casino provides Australian players with the following deposit options: Bitcoin, paysafecard, Visa and MasterCard. For all methods the max deposited amount should not exceed AU$1000 per transaction, except bitcoins which are not capped. It is also possible to transfer BCH using the Bitcoin option. For details about Bitcoin Cash, a player should contact Customer Support to get casino’s BCH address. Anyway, all deposits reflect on the accounts immediately.

First-timers have to submit various documents for player’s identity verification before the first withdrawal is processed. This one-time procedure lasts for about a week. The minimum withdrawal amount is AU$100 and money can be drawn through Bank Wire only. Payments are usually processed within 3 to 7 working days. Depending on player’s VIP position reached in the casino, the lowest maximum limit is AU$2000 per week. To confirm which amount a player may cash out, it is recommended to get in touch with a Support agent (via a live chat or by email).

All casino bonuses listed in the casino can be conventionally split into four groups:

All Rival-powered online casinos show great performance in mobile environments and Supernova Casino is no exception. It has a nuanced mobile site with handy interfaces and menus, easy access to all casino sections and fast signup (login) process. Actually, all important information in the mobile casino is accessible at a touch of the screen. Apart from a smaller screen size, the overall quality of mobile games in Supernova Casino is very high and all Customer Care options (live chat, email, phone) are supported properly.

There are three subgroups of pokies present in Supernova Casino: i-Slots, 3-Reel pokies and video pokies. Operating since 2006, Rival have produced over 200 pokies and their number is increasing about every month. As a general rule applicable to most pokies in Supernova Casino, a player may choose to bet 1 to 10 coins per line and also select a coin denomination in the range between 1 and 25 cents.

Scoring success on the gambling market, Rival do not rest on laurels but release games based on new trends and tech achievements. As an example, their recent pokie Wrath of Medusa is the first game designed under a new Rival Alive concept with a range of distinctive backgrounds, from a stone temple to monster’s lair, and a plethora of bonus features including expanding wilds, sticky wilds, free spins and immersive video animations all the way.

Most pokies from Rival contain well-known features that are widely used by other pokie providers. However, pokies in Supernova Casino are far from being called mediocre because they have an excellent graphic component and high winning potential. Australian players usually appreciate different varieties of wild symbols utilized in Rival games. Diamond Dragon, a low-volatility pokie with 50 paylines and bet sizes of AU$0.50 to AU$125, has an expanding wild symbol that fills an entire reel when it is possible to create new wins. Another pokie, Fruit Splash (bet sizes are between AU$0.30 and AU$75), has a Sticky Wild feature that enables one to get respins with wild symbols frozen in their positions during that respin.

There are also a few five-reel pokies in the collection, which award wins in any direction horizontally, from left to right (a normal way of winning for most pokies out there) and right to left. This usually results in more frequent occurrence of winning combinations. All Ways Wins pokies, which pay out in any direction, are Wrath of Medusa, Dark Hearts and Misfit Toyland.

Pokies, which belong under the genre of i-Slots, were introduced by Rival Gaming as a smart addition to their main game suite. What is exciting about i-Slots is there long storyline and gradual emergence of bonuses that first need to be unlocked before appearing in a pokie for the first time. Some i-Slots have bonus features that are one-off for pokies as a game type (e.g., arcade-style mini games). As a bright example of an i-Slot, Cosmic Quest: Episode 1 has an Asteroid Blasteroid bonus game in which a player has to control and maneuver a spaceship with arrow keys on the keyboard. Other prominent pokies of this type are Psychedelic Sixties, As the Reels Turn (three parts) and Reel Crime (two parts).

Rival developers attempt to target their games at the widest audience possible. With this aim in view, they create pokies of different styles and layouts. Three-reel pokies from Rival deserve special mention as they are far cry from what is traditionally regarded as three-reel games. Almighty Dollar, Dr Acula, Heroes Realm represent a brilliant combination of old-school layout, advanced bonus features (wilds, multiplier and free spins) and stunning graphics. To illustrate the point, Eggstravaganza is an Easter-themed three-reel pokie with free spins and an eye-catching series of animations that entertain players during a gaming session. Classic pokies from Rival would definitely appeal even to sophisticated Australian players who opt for complex five-reelers.

The 12 table games displayed in a relevant casino section are divided into the following types: two roulette tables (American and European), two blackjack tables (classic and multi-hand), baccarat, craps and others. Three clear downsides of this casino offer are:

Supernova is a space-themed online casino which is licensed by Curacao and operates around 150 Rival games. Pokies are very good but a variety of table games remains wanted. Due to high reliability and no scammy practices, Supernova is recommended to Australian players. The mobile casino experience is also impressive and impeccable.