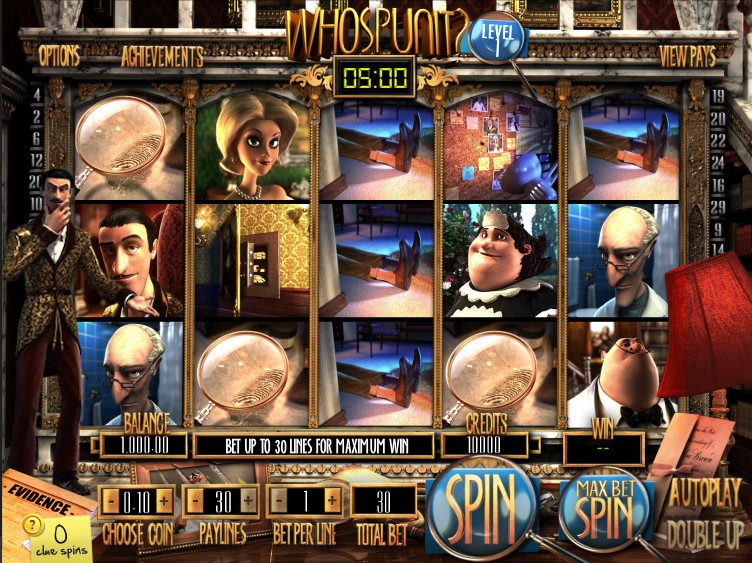 A murder happened in a house of Mr. Killington, a host of an exclusive party which ended up so abruptly. There are so many suspects but who is the murderer? Is it Mr. Killington, housemate Ms. Ellie Smith, Mr. Covington the butler or somebody of guests, Mrs. Chatham the Black Widow or Dr. Austren once accused of malpractice? You can play this 5-reel 30-payline pokie and gain experience of a lifetime: stunning 3D animation, a captivating plot, multilevel gameplay and a chance to bring the criminal to justice and earn up to $5000 in base rounds. Besides, you can grab $30,000 during free spins, up to $1500 in each of three bonus game levels, $3000 in the final bonus round plus an extra award for solving the case. The pokie is packed with features like a bestselling detective story is stuffed with clues.

A murder investigation is a tricky thing yet it can be narrowed down to three main objectives: to find the weapon, detect the murder location and finally point at a culprit. The gameplay is essentially built around these 3 stages or Levels, and each Level is a chance to reach a respective objective. No worries: it takes no pain to start and maintain the investigation. First, select a coin value between $0.01 and $1.00 with the Choose Coin control. Then with the Paylines control select up to 30 lines. Afterwards use the Choose Coin control to bet up to 5 coins per line. Done! You may start the investigation with a bet stretching from $0.01 and up to $150. The Spin control triggers the round and the Max Bet Spin does the same at the maximum bet.

All the 3 levels are time-based: there is a countdown timer above the reels counting from 5:00 backwards. Therefore the gameplay is structured into 5-minute segments; time is running in a special way in this investigation and when a special feature is activated, the countdown timer stops to save time for the main investigation.

The objective is to collect as many clues as possible at each level: a sufficient number of clues narrows the circle of suspects down to one and awards free spins between levels, one free spin per each clue collected. Clues are golden question marks and they are scatters in essence: they appear anywhere on the reels, each pays 30 coins and awards one free spin in a special clue collecting mode that activates when a 5-minute period is over.

Here is a tip: to collect more clues you need more spins, therefore try not to waste too much time on thinking, focus on spinning. You may even press STOP when the reels are rotating to decrease the spinning timespan and increase the number of spins per a 5-minute segment. To maximize scatter payouts, set a higher coin value.

There are 9 regular symbols that include (in ascending order of payouts) a Magnifying Glass, a Table Lamp, a Safe, five suspects including House Maid, Butler, Dr. Austren, Mrs. Chatham and Mr. Killington, and a Victim. These icons pay out from the leftmost reel and start earning when there are at least 3 of a kind on an active payline. This is a pokie with 30 paylines so winning combinations are associated with these lines; to maximize wins you should wager on all the 30 paylines. The regular symbols mentioned above offer payouts from x10 up to x1000 (or up to $5000 at the maximum line bet of $5).

All the five suspects are also bonus triggers and do bring a lot of fun into the time-driven gameplay and immensely increase your chances to win. When they appear in a base round, all five of them, one character per reel, i.e. within a 5-minute segment of the gameplay, a free spin mode is activated and 10 free spins are awarded immediately. You should select one suspect to play free spins with: in a free spins mode each character has a gift for the gambler.

When the countdown timer stops, a Clue Collecting round activates. There are three rounds, each starting after a 5-minute gameplay. New reels appear and they feature new icons with a new paytable. Level 1 ends with a Murder Location clue collecting round. The possible locations are a Gazebo, a Dining Room, a Study, a Kitchen and a Bathroom. Level 2 ends with a Murder Weapon clue collecting round and features icons of a Poison, a Knife, a Noose, a Gun and a Wrench. Level 3 brings you closer to the climax of the investigation and features a Culprit Clues Collecting round with the following icons: a Cigarette, a Duster, a Stethoscope, a Watch and Spilled tea. All clue icons pay from left to right when at least 3 of a kind appear on an active line.

Payouts are from x20 up to x300 or up to $1500 at the maximum bet. Besides cash wins, each winning combination of clue icons awards clue points; they are displayed on a special clue point meter above the reels. An item that collected the highest number of clue points is the most probable murder location, murder weapon and a perpetrator. Looking at these meters you will have no problem to figure out what the weapon, murder location and, finally, the murderer was.

Second-screen bonus round: jail the murderer!

As soon as you finished the third Clue collecting round, you are on your way to the final part of investigation. From now on, all spins are free until the murderer will get caught and imprisoned. The central position on the central reel gets golden-rimmed. All you have to do is to land an Evidence icon into that position. Apart from being a bonus trigger, Evidence is a scatter and pays out well. A scatter payout is multiplied by the total bet. So two scatters pay 60 coins, three scatters pay 150 coins, four scatters pay 300 coins and five scatters award 600 coins at a 30-coin bet. At a 150-coin bet, a scatter payout ranges from 300 to 3000 coins.

Having collected this lavish cash prize and landed Evidence into the required position, you step into the room where all the suspects are. Remember the clues you have collected and choose the most probable suspect for the final interrogation. Ask him questions one by one until he or she is cornered and confess. The murderer is jailed and a newspaper shouts about the case and your excellent investigation.

The complete cycle of the gameplay is completed and you start it all over again and nail down another suspect, in the same brilliant manner and with pockets full of cash. Do not forget a reward for solving the case: it is a generous multiplier that applies to a total bet and converts your best efforts into the best rewards of all – cash.

As if there are not enough features, there is also a gamble feature active after each base spin. A Heads or Tails coin tossing game gives a chance to double base round wins with no limits on the number of wins. It is painstakingly animated as each and every single piece of this magnificent video slot.

The 5-reel 30-paylines pokie leaves no doubts: Betsoft is a trendsetter in the industry capable of mind-blowing breakthroughs in any respect. This amazing pokie offers interactivity of the most engaging computer games and at the same time it generates healthy prizes: up to $5000 in base rounds, up to $1500 in special rounds, $30 000 during free spins and much more. Gambling has never been so entertaining and rewarding at the same time. It goes without saying, the pokie is fully optimized for all major mobile devices.