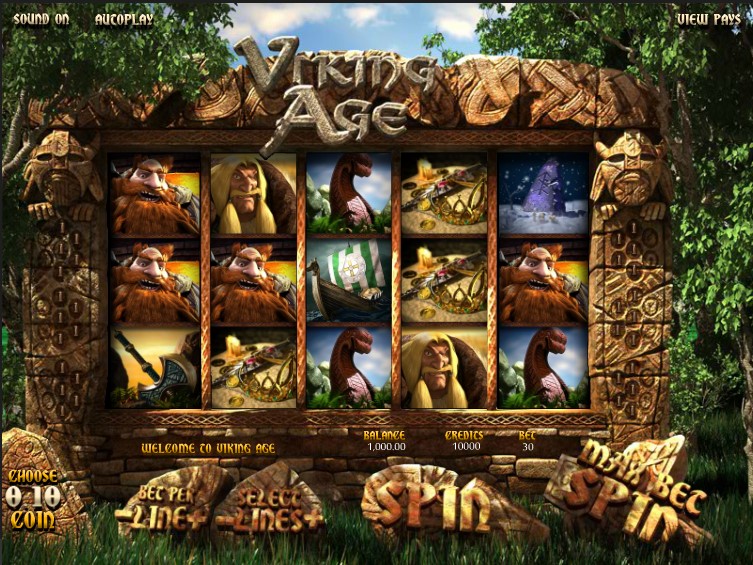 Recent releases of Betsoft evidence its position as a trendsetter in the gambling world. Viking Age, a 5-reel 30-payline video slot, is built upon top skills and immense creativity of Betsoft’s stellar team. The pokie starts with a 3D movie featuring Vikings’ adventures, and the intro is so spectacular that you may well forget the actual purpose of the pokie: to play for real money in an online casino. Yet it is perfectly up to this respectable aspiration! It offers up to $1500 wins in base rounds, free spins with a x2–x5 multiplier and two grasping bonus features with cash prizes. Beautiful Amma and her fellow warriors make a great company and you will not regret joining their expedition!

Gameplay: stand up and fight!

The interface is made of derelict stone structures covered with worn out runes yet they work just fine. Select a coin value between $0.01 and $1.00 with the Choose Coin control. Then place from 1 to 5 coins per line with the Bet Per Line control. Up to 30 paylines are activated with the Select Lines control. These controls permit a bet to run from $0.01 up to $150. Clicking the Spin control, you start the round at a manually tailored bet while the Max Bet Spin start the reels at the maximum bet of 150 coins.

Painstakingly pictured and skillfully animated, regular symbols are represented by wooden shields, stone tombs, dragon ship’s figureheads, golden crowns, heavy battle axes, dragons ships and two Amma’s fellows – two mighty Vikings, Blond Erik and Ginger Elgrim (listed in the ascending order of payouts). These symbols pay out from left to right only; wins stretch from x5 up to x300 or up to $1500 moneywise, at the maximum bet of $150. Three regular icons with lower payouts, from x5 up to x100, award when there are at least three of a kind on an active payline. Higher-valued icons award x4 up to x300 when there are at least two matching symbols on an active line.

All regular symbols award the highest prizes when five of the same appear on an engaged line. Here is the tip: to score on every possible winning combination, always activate all the 30 paylines, and no win will be missed. Three more icons – a Winged Helmet, beautiful Amma and Wrestling Hands – trigger grasping and profitable features and bonus rounds, three in total.

Doors to Valhalla: push the runes and enter

Landing 3 or more Winged Helmets in any positions on any reels triggers the Doors of Valhalla bonus round. The reels turn into stone doors, tightly closed and sealed with an ancient spell. To break the spell and unlock a door, you have to choose a blue-lit rune on the wall. The rest is in the strong hands of Amma. The door with your selected runes opens up and reveals an award: an instant cash prize, free spins or instant access to the second screen bonus round, a Wrestling tournament.

Getting 3 or more beautiful Amma icons triggers a free spin mode. Amma’s fellow warriors help her discover and unlock six hidden multiplying reels, three on each side of the reel set. These multiplying reels carry the multipliers of x2, x3 and x5. During each free spin, they rotate in sync with the five reels, and when there is a winning line with matching multipliers on both ends, that multiplier applies to the payout on that winning line. So, what any Viking dreams of during free spins is to score 5 Blond Eriks with a x5 multiplier on both ends and earn $7500 at the maximum bet.

Second-screen bonus round: a wrestling tournament

Viking Age was a tough time even for the strongest and mightiest: there was always someone to challenge your status, your wealth and ultimately your life. Amma’s fellow warriors, Elgrim and Erik, are friends and they challenge one another in an honest wrestling tournament that is designed with stunning visual effects. The tournament is triggered by getting three or more Wrestling Hands icons scattered anywhere on any reel. Warriors will challenge one another and you should select one of them, either Erik or Elgrim. They start wrestling and a golden coin appears on the screen.

Yep, you are right: it is a good old coin tossing game! Bet on Heads or Tails and the tournament is over in three captivating rounds: the winner is declared and an instant cash prize is paid. The prize depends on the number of Wrestling Hands icons in the triggering spin and of course on the correctness of your guesses. Anyway, it is not something neglectable: even three wrong guesses earn x5 initial bet or up to $750 at the maximum bet. To hit a generous prize, you should select a higher coin value: prizes and payouts are displayed in coins but are recalculated in dollars based on the coin value you have selected.

The 5-reel 30-payline video slot developed by Betsoft is one of the brightest games in the developer’s library. Fantastic graphics and true 3D animation, a grasping plot, heart-winning characters and an impressive set of gambling features: up to $1500 wins in standard rounds, up to $7500 with Multiplying Wilds, free spins and an exciting second-screen bonus with lavish prizes. All in all, this mixture of features makes it a highly appealing video slot. The pokie is compatible with most devices of your choice, including mobile devices.