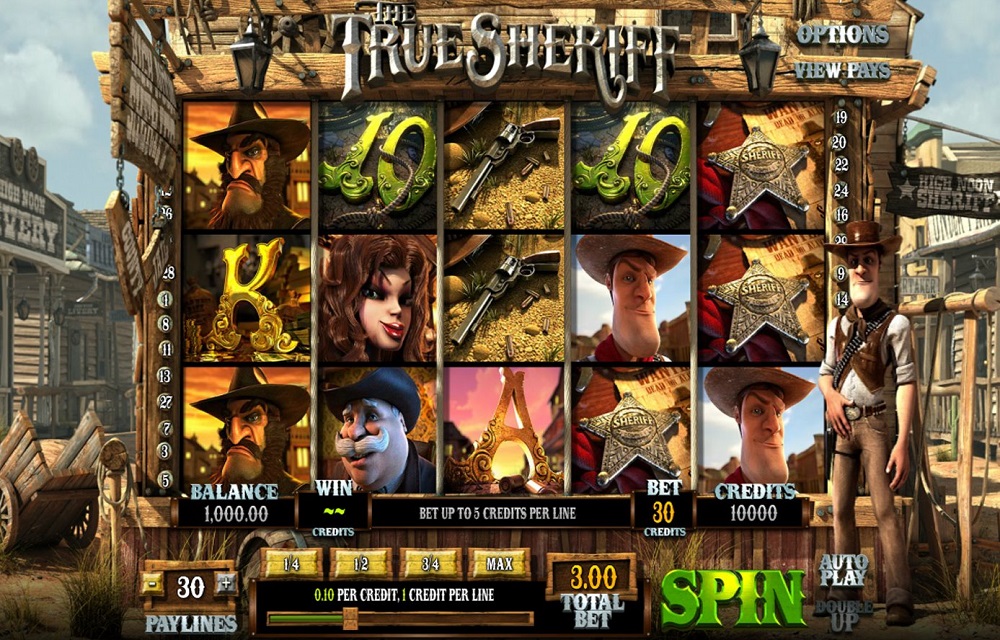 True Sheriff, a 5-reel 30-payline pokie by Betsoft, tells a story. Lost in the vastness of the Wild West, the town of High Noon enjoys peaceful life under a wakeful eye of the local sheriff. A brutal villain comes to the town and there can be only one walking away after a final showdown. And the case may be that this one is an Aussie who spotted this pokie. The chance is to endure a real Wild West adventure with its high stakes of life and death. And high stakes mean high prizes: up to $6000 in base rounds, Wilds paying up to $15,000, Scatters awarding up to $15,000, a gamble feature and also a chance to defend the town in a Final Showdown and earn a reward.

The pokie features an interesting interface that misses two controls, a Bet Per Line and a Choose Coin. Instead there are 4 buttons and a sliding switch to adjust a bet to your ambitions and budget. Lines between 1 and 30 are selected with the Paylines control. A bet size may be set in two ways.

Wild Gun feature: fire at will!

A classy Smith & Wesson gun is a bonus trigger and it works in a tricky manner: it becomes effective if it appears on the central reel only. In a blink of an eye the Sheriff takes his gun and shoots at the reels five times. He is a sharp shooter but symbols are small, so he can hit 1, 2 or 3, up to 5 icons. They turn into wilds and a re-spin with wilds is granted. This a good help for a gambler because the wilds will sub for all payable icons; however they do not replace Guns and Badges.

A Gun symbol is also a trigger of a second-screen Final Showdown bonus round. When a Gun pops up between Sheriff and Villain or in a reverse order, between Villain and Sheriff, on active lines 1, 2 or 3, the second screen bonus round is triggered. If the combination of Sheriff, Gun and Villain appears on reels 2, 3 and 4, it triggers the Wild Gun feature.

It is a climax of the conflict between the Good and the Bad and a breathtaking true 3D movie as well. The Sheriff and the Villain are ready to shoot bullets and the outcome depends on your luck: toss a coin and make a right guess, Heads or Tails. Each correct guess progresses you onto the next level – there are 5 levels – and increases the total bonus win. It is finally calculated when the feature is over and may reach quite a big amount especially if the bonus round is triggered by an increased winning combination, either Villain + Gun + Sheriff + Gun + Villain or Sheriff + Gun + Villain + Gun + Sheriff.

A Sheriff’s Badge is a Scatter. Landing 3 or more Badges in succession on adjacent reels, starting from the utmost left reel, awards a Scatter payout and free spins. The payout is incredible! It ranges from x60 for 3 Badges and up to x3000 for 5 Badges (up to $15,000 at the maximum bet of $150). In addition, Badges earn free spins: 3 Badges earn 10 free spins, 4 Badges award 12 free spins and 5 Badges make it 15 free spins.

Double Up: try your luck

A win in a base round activates a Double Up button and a gamble feature. Having opted for gambling, you bet your winning on Red or Black. Skillfully animated, this feature adds a lot of thrills and chills into the gameplay and opens up unrestricted opportunities for doubling the win. It is unavailable after free spins or a Wild Gun feature.

The 5-reel 30-payline video slot powered by Betsoft is a mind-blowing milestone in terms of technology, entertainment and gambling experience. True 3D wide-screen animation and plot-matching ambience produce the effect of being there. Chance of winning up to $6000 in base rounds, up to $15,000 in Wild Gun rounds, up to $15,000 in Badge free spins round and a gambling feature on top make this pokie an absolute no way to miss must for anyone with a penchant for gambling. It is accessible from any device of your choice, a desktop or mobile.