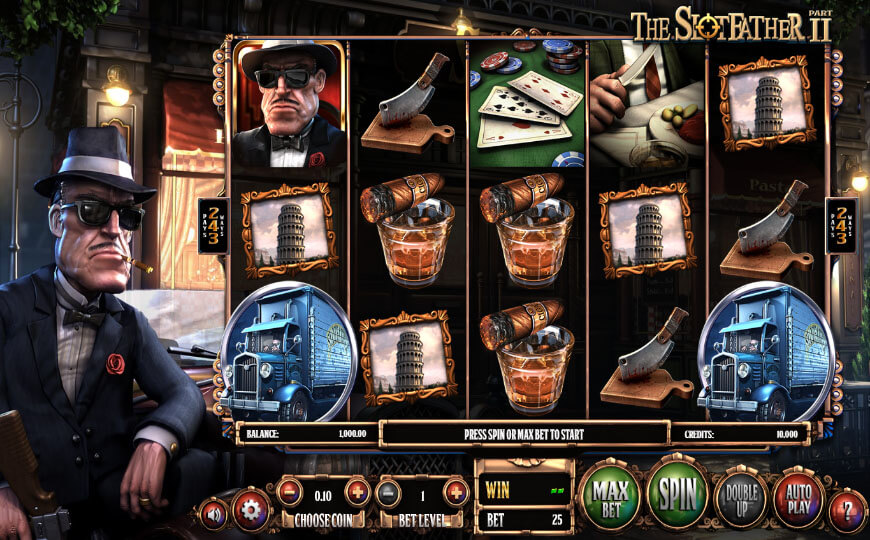 Thanks to Slotfather Part II, a 5-reel 243-way video slot from Betsoft, you may put on Slotfather’s shoes and indulge yourself in the amenities of mobsters’ life. Play it for real money to get up to $1500 in base rounds, up to $3000 in a free spin mode, scatters that pay $1250 and twice as much in a free spin mode, re-spins, three features with instant cash prizes and a gamble round. There are very few online casino pokies that would be equipped with so many features at a time. Stunning animation and heart-melting soundtrack turn it into a lifelike exercise. Read the rules and tips below.

This is a 243 Ways To Win pokie. This means that the pokie does away with paylines and counts all adjacent matching symbols, no matter their positions on these reels. This principle leads to a juicy situation that each spin is associated with 243 possible winning combination of matching symbols.

Having understood this, you should hurry up to make 2 bet adjustments and start enjoying all the 243 ways to win! First, select a coin value between $0.01 and $1.00 with the Choose Coin button. Then select a bet level between 1 and 5, corresponding to 25 to 125 coins per spin. Thus your bet can vary from $0.25 up to $125. Every bet covers as many as 243 possible winning combinations.

There are 6 normal symbols, a wild icon, a scatter and 3 bonus triggers. The 6 normal symbols are (in ascending order of payouts) a Leaning Tower of Pisa, a Broadsword, a Cigar on a Whisky Glass, Dollar Bills, Playing Cards and the Slotfather himself. They pay from left to right, beginning from the utmost left reel. Normal symbols start earning when there are at least three of a kind on neighboring reels and award top wins when there are 5 of a kind.

A Safe Deposit Box with golden ingots is a Wild icon, it substitutes for all normal icons including gangsters. Wild icons appear on reels 2 and 4 in base spins and on reels 2, 3, 4 and 5 during free spins. Normal (non-feature) symbols award x2 up to x300 (up to $1500 in money terms at the maximum bet of $125). The payouts do not look impressive but this is actually only a base level of wins. Read below about Scatters and bonus features to see the real scale of gangsters’ earnings!

One of Slotfather’s businesses is a freight company, a notorious Slotfather’s Trucking. A truck marked with this logo and pierced with bullets is a Scatter. The scatter is three-fold: it pays out independently of other symbols; it triggers free spins during which all payouts including scatter wins are twice as high as in base game. So two or more Scatters anywhere on the reels pay out x50 up to x250 (or $1250 at the maximum bet). Three, four or five scatters in any position award 8, 12 or 20 free spins; extra free spins (again 8, 12 or 20) may be awarded from within an active free spin mode. During free spins all payouts are multiplied by x2. Therefore, all normal symbols will earn you x4 up to x600 ($3000 at the maximum bet). Scatters will pay you x100 up to x500 or up to $2500 at the maximum bet.

Free spins are made in style and are played on the second screen featuring one of the trucks. It has a secret wall behind where the reels are hidden. After a free spin mode is finished, there is a special Big Boss bonus, an instant cash prize of 100, 200 or more coins depending on a bet size.

There are three Slotfather’s henchmen: Fat Tony, Frankie the Knuckles and Snake Eyes Sammy. They are also extra payable icons and bonus triggers but they play by their own rules, a sort of Slotfather’s special task force. They are very special icons as you may notice – they are giants, occupying an entire real each. Three or more matching gangsters pay from x5 to x35 ($175 at the maximum bet). What is great about them is that a giant icon pays out when it is visible on the reels entirely or just partially.

Furthermore, landing two identical giant gangster icons on the reels triggers a respin during which the two giant gangsters are held in place, increasing your chances for winning a second screen bonus round. If there are two or more different gangsters on the reels at the same time, a respin is awarded for only one of them. The priority of respins is as follows: Frankie goes first, then Tony and Sammy’s respins occur last.

The second-screen bonus round is tricky. It is triggered by 3 or more matching giant icons that occupy an entire reel. The feature can be triggered in base spins or as a result of respins. For instance, you have landed two giant Fat Tony symbols on the reels and won a respin. A respin is played and one more Tony appears. This third Tony symbol helps you win the second-screen bonus round. If giant Sammy or Frankie landed in the wake of a respin, a Gangster feature will not be activated.

So three or more matching giant icons on the reels trigger a second-screen bonus round. In essence, it is about collecting protection money and is the easiest part of the job. Everything is taken care of in advance and what you have to do is to click on any of six folders one by one to reveal instant cash prizes. Here is a tip: prizes are paid in coins, and to get the most of the feature you should wager dollars, not cents, otherwise Slotfather’s business works for peanuts. For instance, Snake Eyes Sammy brings 1000 coins in each folder or $1,000 moneywise, $6,000 in total, if you play at the maximum bet.

Last but not least: gamble feature

Each win in a base round can be doubled with a gamble feature. It is activated with the Double Up button and you are to bet on Head or Tail. You can choose whether to gamble 100% or 50% of your winnings in the triggering round. There are no limits on the number of tries. The feature is unavailable after free spins and bonus rounds.

Bottom line on The Slotfather II

This 5-reel 243 Ways To Win video slot by Betsoft is a true flagship product featuring a grasping plot, stunning true 3D animation, appealing characters, a vast collection of features and bonuses and a very attractive paytable including up to $1500 in standard wins and up to $3000 in a free spin mode. Besides, there are scatters, three features with instant cash prizes and a gamble round. It has no progressive jackpot but the pokie itself is a jackpot that an Aussie will be extremely pleased to experience. It is compatible with most iOS/Android mobile devices.