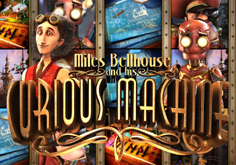 This 5-reel 30-payline pokie is devoted to time traveling. Join Dr Miles Bellhouse, who has built a time machine, in his journey to the prehistoric times and snatch a good piece of cash from dinosaur’s claws. The pokie has a Vortex Wild bonus that makes adjacent symbols rotate and award a prize. Besides, you will enjoy a second-chance bonus, Blast To the Past Free Spins and a gorgeous Travel Through Time mini bonus. On top of that, the maximum win of $7500 will make you happy if you choose to play for real money. 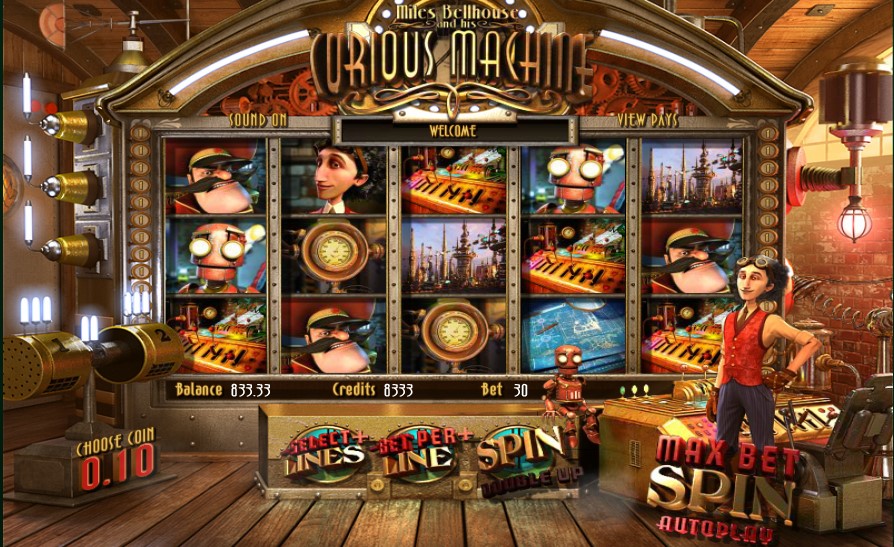 The graphics in the online pokie is saturated with details. The action takes place at Dr Miles’ lab where you can find scientific equipment, rotating wheels, steam blasts, weird devices of unknown purpose and the scientist himself who stands or sits at a massive bronze panel with levers, gauges, buttons and switches. While people have normal pets, either cats or dogs, the doctor’s pet is an animated robot that looks at the reels with curiosity and waves his metal hands when you get a win.

Bet sizes are fairly typical for a Betsoft creation and have no unexpected bet values. There are three adjustable settings: the number of lines (1 to 30), the number of coins (1 to 5) and coin denominations ($0.01 to $1). In money terms, the min/max bet sizes are $0.30 and $150, accordingly.

In some gaming situations, you would have four matching symbols on a payline but no win because these four pictures have a one-symbol interruption. If this happens, the pokie gives you the second chance to complete a win by respinning the reel where there should be the needed symbol. When the free respin ends, you have a high chance at a x5 combo.

Blast To the Past free spins

Get three roaring T-Rexes on reels 1, 3 and 5 to get access to free spins. The scientist will turn to the control panel and flip some switches. Suddenly, the lab will disappear and the scientist with his robotic companion will find themselves standing at a prehistoric forest, with reels having 10 free spins. At the bottom left corner, there is a multiplier indicator with four values of x1, x2, x3 and x5, all flashing randomly. When the reels stop, one of the values gets lit up to show the multiplier to apply to a win (if any). When the last free spin ends, a raging dinosaur will run onto the screen, making the scientist travel back to the present time.

When mysterious whirlwind with a black hole inside occurs on reels 2 and 4, it will act as a wild symbol and trigger an exciting feature in addition. It becomes rotating vigorously and all symbols around it will also rotate to stop in a few moments in a different pattern. This feature can potentially result in a win, especially if a wild vortex lands on reels 2 and 4 at a time. A vortex can also move to the central reel before rotating if the new position will be more beneficial for the gambler than the currently occupied.

This wonderful, never-before-seen feature is a travel to the future on the time machine invented by Dr Miles. The bonus is activated by 3 Panel symbols landed on reels 2, 3 and 4. Hardly had the talented scientist finished the machine that a nosy general came peeping inside the lab. The scientist and his metal friend had little choice but escape the prying eyes of the general, traveling to the future.

The farther in time they manage to escape, the more coins you are going to grab. This bonus boasts of numerous scenes of futuristic cities and short stories describing the wonders of the future. Each leap in time adds coins and you can finish your fantastic adventure with thousands of bonus coins, which translates into thousands of real-money dollars added to your balance.

The gamble feature in the pokie provides great gaming experience like no other. Its concept is standard: The player gambles the amount won in the latest base game and either doubles or loses his win. Instead of threadbare red/black cards or coin tosses, this Double Up feature offers something unique. The professor’s robot steps up to you offering to guess the hand in which it has hidden a coin. When you made a choice, the robot then holds its hand out flat and you can see a golden coin (Win) or a metal bolt (Lose).

Bottom line on The Curious Machine

This is a totally exciting, sci-fi video pokie about time traveling to the past and future. Set at a physical lab, the pokie has a few astounding features such as a Vortex Wild and a second-chance bonus to help you win a x5 combo. Besides, there are free spins with a random multiplier, and a second-screen Time Travel bonus with a huge winning potential. The maximum regular prize in base game reaches $7500 at the maximum bet of $150.