Play The Angler Pokie for free 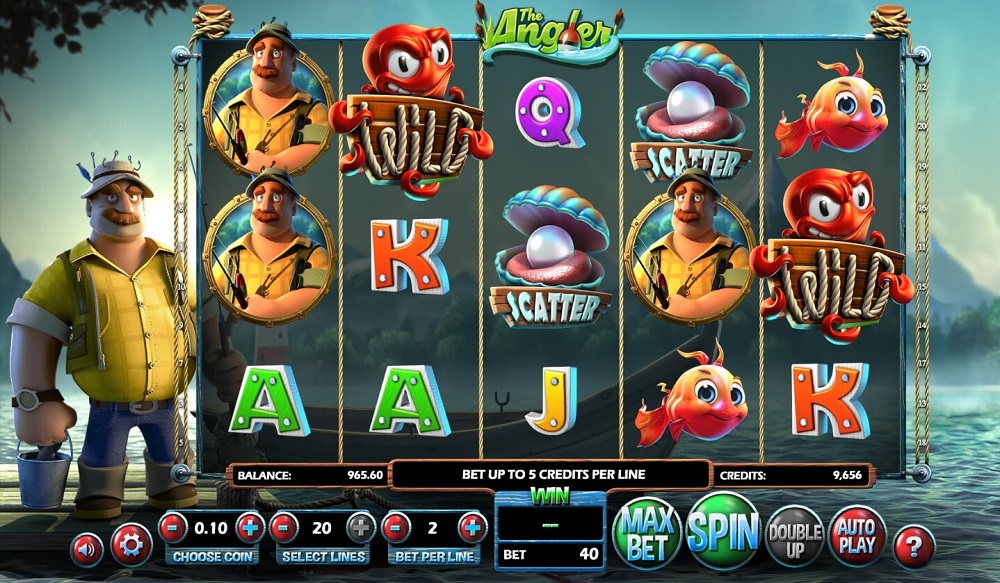 This is a fishing-themed video pokie with 5 reels and 20 paylines. The game has funny cartoon-styled symbols and is also equipped with a couple of interesting features that add fun. A wild octopus symbol becomes sticky in free spins and not only brings a smile on your face, but also enlarge your coin balance with pretty good wins. The pokie offers you to test your fishing skills in a unique bonus game in which you have to pull out fish from the water and score bonus coins for each fish caught. The highest win in base game reaches $1750.

As eye-catching as other Betsoft’s titles, The Angler is devoted to fishing in a calm placid lake. But interestingly, the fish species depicted on pokie symbols also include some deep sea creatures. Anyway, the visual appearance of the pokie is great. The game follows the Betsoft’s commitment to produce high-quality games when it comes to graphics and bonus features, and the reviewed pokie will not disappoint you if you want to play for real money and have wonderful online casino experience.

Behind the reels, you can find a big mountain lake with trees growing on the slopes of a cloudy shore. A consummate fisherman in waterproof boots stands near the reels with a basket and waits for you to fill it with your catch. The symbols have a typical cartoonish style as if they were made for a children’s animated film.

Icons in the paytable are split into two groups, based on how much they award. The first group consists of playing cards J, Q, K and A. The highest prize that you are supposed to win on hitting five of a kind is $375. The other subgroup is represented by high-value icons, which include a red fish ($375), a green fish ($750), a turtle ($750), a hammerhead shark ($1000) and the angler ($1750). Any combination of non-feature symbols must comprise at least 3 symbols to pay out an award.

Players who are familiar with Betsoft creations will not be surprised with the three bet options available in The Angler. The number of lines can be reduced from 20 to 1 – this is not reasonable though. Coins have a few denominations between $0.01 and $1. Finally, each line takes 1 to 5 coins. Consequently, a total bet ranges between $0.20 to $100.

An orange octopus holding a wooden “Wild” sign is a wild symbol, as expected. In base game, it does nothing but substitute for non-feature symbols. It has no dedicated payouts – just a mere substitute. Yet it becomes the highlight of free spins where it will help you score big. During normal gameplay, octopuses are never found on the first reel – their habitat is limited to reels 2 to 5 only.

Before coming over to bonus features, it is worth paying attention to the Angler symbol (this minor feature is not specified in the paytable). Being the highest-valued symbol, the Angler comes in stacks. The implication is that you will find two or more of him covering two or even three spaces on any given reel. And this further means you have a slightly increased chance of getting a winning combo.

A shell with a pearl inside is a scatter symbol. Its key distinction from non-feature symbols is that it counts in any position. Well, almost in any position. In the reviewed video pokie, Shells may appear on the third, fourth and fifth reels only, and hitting three of them at a time activates free spins. If a wild symbol stops in any position during free spins, it will grab ropes, hold them tightly and stay in its position until the end of all free spins. And every new wild symbol will do the same, thus you can end free spins having numerous wild octopuses on the reels.

When three bonus symbols land, get ready to test your fish-catching skills in the middle of the lake but before you proceed to the challenge, you get 100 coins instantly.

Fish can be caught by using two techniques – pulling or reeling – and you are asked to choose either. If you made a right choice and caught the fish, you receive one point, otherwise you miss and score zero points. The bonus comes to an end when you have three catches or three misses. You are then awarded coins depending on how many fish you have hooked.

If you feel like wanting more, try the Double Up feature that becomes active after any winning spin. You have to bet all the initial winning or a half of it, on Heads or Tails. In case you have made a right choice, a coin toss will end with your doubling the amount you have gambled.

Bottom line on The Angler

In this 5-reel 20-payline pokie, Betsoft invites you to a boat fishing trip in which you can hook big fish and earn loads of money. It has a pack of thematic symbols as well as a $1750 jackpot in base game. Features provide more winning opportunities, including a sticky wild that appears in free spins and stays in place up to the end of the free game session. The pokie’s central bonus feature is a Boat Fishing mini game that allows you to put your fishing skills to the test and catch lots of money in the process.