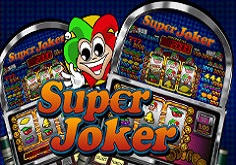 Super Joker is a wonderful entertainment for all 3-reel pokie fans. This game released by Betsoft has a Supermeter feature and two reel sets on which you can win a fixed jackpot of 2000 coins. Abundant with fruit symbols, the pokie offers a no-frills gambling experience and lots of retro-styled fun. No wilds and no free spins are present in Super Joker but this unsophisticated pokie will make all gamblers who like genuinely classic solutions feel great enthusiasm and interest when spinning the reels of this classic slot. 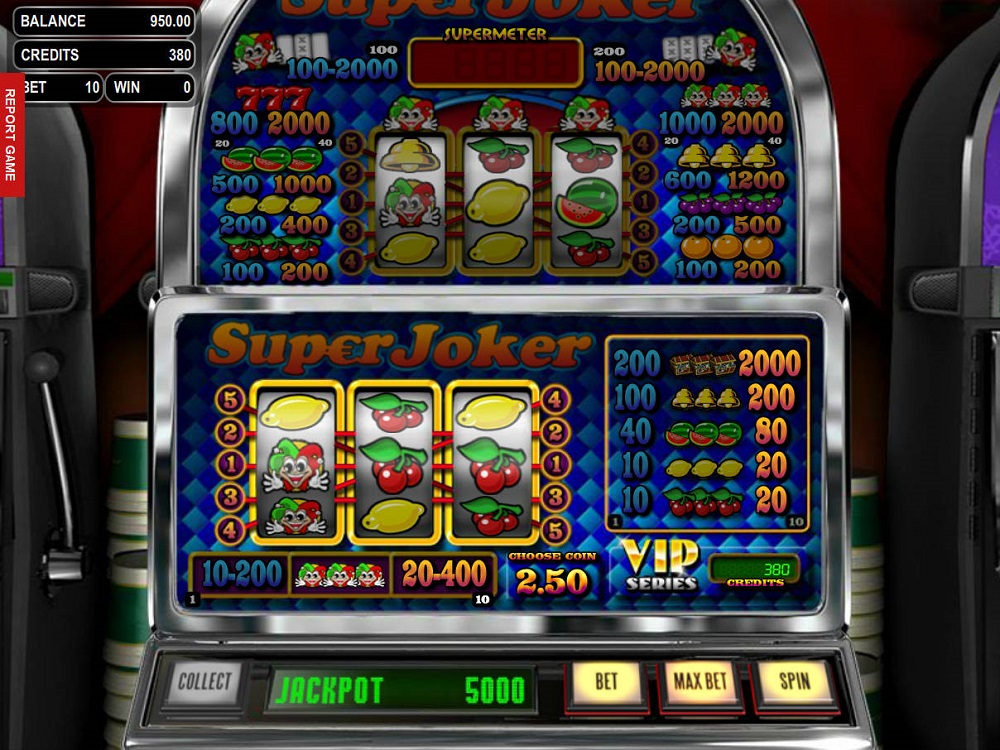 Super Joker mimics the appearance of an authentic slot machine. You will see a massive cabinet with glass and metal surfaces. There are distinctive buzzing sounds that can be heard on real-life slot machines when the reels are spinning or after they have stopped with a winning combo on them. Blinking lights and realistic rectangular buttons add a touch of realism to the pokie.

You will notice immediately that the screen with the game is split into two parts, each having three reels and a unique package of fruit symbols. The game begins on the bottom part that has 5 paylines, three running horizontally and two are diagonal. The symbols on the bottom section include cherries (10 coins), lemons (10 coins), watermelons (40 coins), bells (100 coins) and treasure chests (200 coins). Symbols create a combination when three of the same land on an enabled payline.

You can change coin values between $0.02 and $1. By clicking the Bet button, you can switch between two options: To wager 1 coin on the central payline only and to wager 2 coins on each payline. That said, you may play at the minimum bet of $0.02, the maximum bet of $10 and everywhere in between.

When you have a win on the bottom reels, the money earned is transferred automatically to the Supermeter indicator and the gameplay moves to the upper section of the screen. Payouts here are more lucrative, starting at 100 coins and reaching 1200 coins for three bells. Only two bet sizes are available on the upper part of the screen; these are 20 and 40 coins. And the bet is deducted from the Supermeter indicator automatically. When there is no money left on the Supermeter, the game then switches back to the bottom reels.

A joker is a mystery symbol because it has variable payouts that are determined at random. When you hit three jokers on a line of the bottom reel set, you receive a random cash prize of 10 to 400 coins. When the same combination occurs on the Supermeter, upper reels, they produce a win of 100 to 2000 coins.

The maximum cash prizes in the game are $2000 and they are granted if you play at the maximum bet of $10 per spin. You are thus encouraged to play at max because you will grab higher prizes. The jackpot prize is awarded if:

Super Joker is a classic pokie with two reel sets and fruit symbols. Bet sizes vary between $0.02 and $10 per spin, and the highest jackpot prize runs up to $2000. The pokie comes without any familiar bonus features such as wilds, scatters or bonus rounds, yet Super Joker provides a sought-after kind of entertainment for online casino users.