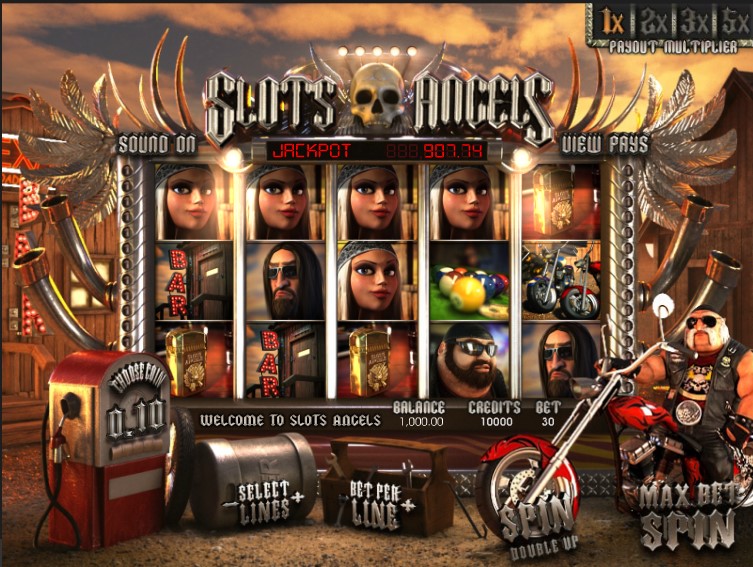 Slots Angels is a biker-themed progressive pokie with 5 reels and 30 paylines. With a heavy metal twist, the pokie takes you to explore U.S. interstates and highways, home for old-school bikers. The game has many exciting features such as a central reel respin with cumulative multipliers x1 to x5, free spins and a Darts click-me bonus game. You stand the chance to take part in bike races and win the first prize. On top of that, a local progressive jackpot is waiting to be won.

Contrary to the peaceful and even divine name, the pokie is about a gang of bikers who criss-cross the United States (or Australia), stop at roadhouses and frighten passers-by with roaring engines of their heavy horse-powered motorcycles. The five reels are set against wooden motel apartments at sunset. A brutal white-haired biker sitting on his bike is always visible next to the reels and he reacts vividly to what is going on around him. Additionally, the pokie has some rock music style, which is manifested in pokie fonts used in the paytable and button writings under the reels, and a big bronze skull above the reels.

The user interface buttons are creatively designed to resemble different motor related elements, for example, a Choose Coin button is made as an old-fashioned gas pump and a Bet Per Line button looks like a massive instrument kit. Fans of high-quality games will not be disappointed with the graphical aspect of the game because it is nearly impeccable.

The pokie has three settings that affect a bet size. The number of active paylines ias adjusted from 1 to 30. A coin value is changed between Betsoft’s standard limits from $0.01 to $1. And each line takes 1 to 5 coins. Therefore, the minimum and maximum bets in the game vary from $0.30 to $150.

Respin feature with a multiplier trail

The relatively small payouts are offset by the respin feature that gives you more chances to win after you have already had a win. Every time a winning combination occurs, you get a relevant payout and the central reel respins once. When it stops, it may so happen that a new combo is generated, in which case you get another respin of the central reel. The respins keep on running until no more combos are formed.

The payout multiplier trail with four values (x1, x2, x3 and x5) is shown at the top right corner of the main game screen. Every paid spin starts at a default multiplier x1. Then, after the first win, it shifts to x2, then to x2 and x5. So each respin leads to bigger wins if you are lucky enough to hit a winning combination. Supposing that you do hit five chubby bikers on a payline at a multiplier of x5, your ultimate win is going to reach $7500!

The pokie also provides you with free spins if you get three bottles on any reel other than reel 3. During free spins, the entire central reel will turn into wild and substitute for all non-feature symbols for even more winning chances.

Now it is time to throw darts. Get three dartboard symbols and unlock the click me feature where you can grab some healthy prizes. On the same screen, the three dartboards will enlarge and you are asked to pick any one of them. Your picked item reveals a random cash prize and you return to base game.

This is another special feature that will make your heart beat faster when cheering for your favorite bike racer. To unlock this captivating bonus game, you need to see three Lead Biker symbols on the first, second and fifth reels. Then you are asked to select one of three bikers who you think is going to win the race. When the race is over, you receive a generous cash reward that depends on the place that the guy you backed finishes the race on. Finishing in the first position gives you an impressive top prize.

All progressive pokies from Betsoft, including the reviewed one, are local. This implies that jackpot amounts grow at a different pace in each online casino Slots Angels is present. A bet to qualify for the jackpot may vary widely between $1.5 and $150 per spin but in any case the player must put five coins on each payline.

The jackpot is won when five chubby biker symbols hit line 1 (the top horizontal line). If you play at a bet lower than a qualifying bet, you are get paid 300 coins for this combination, instead of the jackpot.

This is a standard Coin Toss feature designed in a theme-fitting manner. A gloomy biker is drinking bottle beer and offers you to select heads or tails, then he tosses a coin and reveals the outcome. In case you guessed it right, the gambled amount is doubled.

Slots Angels is a 5-reel progressive pokie with 30 selectable paylines. Along with the jackpot, the video slot has respins at a multiplier of x2 to x5, wild reels, an instant cash Click Me game, a second-screen Bike Races bonus and free spins.