Play The Slotfather Pokie for free 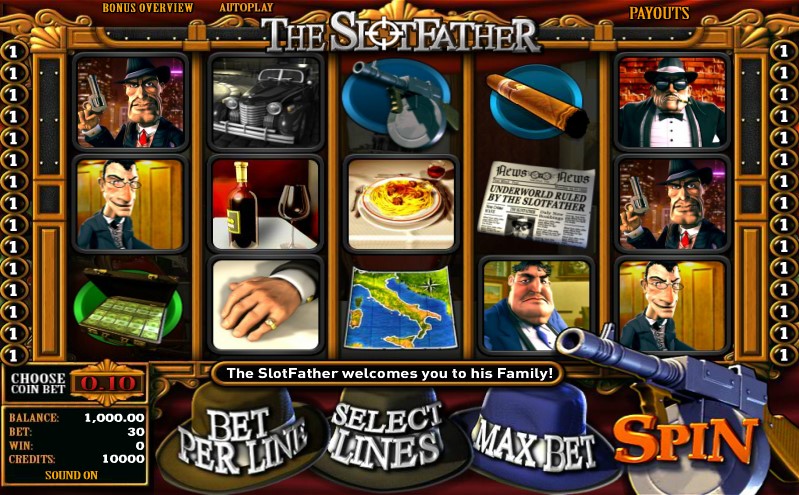 Fiction and nonfiction books, films and bush wireless say a lot about the secretive family of the Slotfather. Their rules, their immense wealth and ungraspable influence are the talk of the town. Thanks to The Slotfather, a 5-reel 30-payline progressive pokie by Betsoft, you have a chance of a lifetime to join the family and win up to $1000 in base rounds, up to $3150 in a free spins mode and up to $1500 for 5 Scatters, experience Mob Free Spins with random multipliers, two lucrative on-reels features, cinematic-quality bonus rounds with instant cash prizes of up to $4500 and a progressive jackpot.

To join the family business you have to select a coin value between $0.01 and $1.00. Click the Bet Per Line button to wager from 1 to 5 coins per line. Now choose up to 30 paylines with the Select Lines control. These adjustments allow betting within a broad range between $0.01 and $150 per spin. Click the Spin control to trigger a spin at your customized wager, or click on the Max Bet button and dare on a 150-coin bet. Here it is: your life in the Slotfather family begins.

There are as many as 11 regular symbols featuring a Newspaper, a Cigar, a Map of Italy, a Plate of spaghetti, a Tommy gun, a Hand with a golden ring, a Bottle of red wine, a Black car, a Suitcase with cash, a Sneaky gangster and Old gangster (listed in ascending order of payouts). They pay from left to right within a range between x20 and x200 (or up to $1000 at the maximum bet). Most regular symbols start winning when there are at least 3 of a kind on an active payline except for four icons with the highest payouts (Car, Suitcase and two Gangsters) which start paying when there are two of a kind.

All regular icons pay the best when there are 5 of the same on an active line. It is strongly recommended to activate all the 30 lines each spin to get the most of the paytable and improve the probability of winning. The two gangsters you have already met, Sneaky Gangster and Old Gangster, and also Fat Underboss and Slotfather trigger features and bonus rounds to be reviewed in detail below.

When a Sneaky Gangster appears on either side of the Case symbol, a Sneaky Instant Win feature activates. The Gangster’s nickname is Sammy the Quick Fingers and it is for good reason. The Gangster reaches out of his stop position and grabs a loose bundle of cash from the Case. Before the Gangster finishes his speech, all his booty is added to your account. This nice and fairly profitable feature activates on paylines 1, 2 and 3.

Again, two regular symbols in conjunction, a Tommy gun and an Old Gangster, trigger a feature. Land an Old Gangster on either side of a Tommy Gun on payline 1, 2 or 3 and mind the bullets. The Gangster grabs the Gun, pulls the trigger and shoots in your direction! Thanks God he misses you and all the bullets hit the reels. Now it is your turn. You have only one shot. Click on any bullet hole you like and reveal your prize.

Here is how much you can win. First, there is an instant cash prize of 30 coins multiplied by a line bet so it may reach 150 coins ($150 at the maximum bet). Second, each bullet hole hides 3 to 10 free spins and a random multiplier from x1 to x3 to be applied during free spins.

A Fat gangster is Slotfather’s underboss and a Scatter. Landing 3 or more scatters in any position on any reel activates an Underboss Scatter feature. Scatters pay out x60 to x1500 ($1500 at the maximum bet). Moreover, all regular symbols on the reels turn into scatters. This means that they pay out as if they were real scatters, regardless of their positions on the reels – only the number of symbols counts. So, if you manage to land 5 Underbosses and also 5 Old Gangsters in any position, your win is going to be 2500 coins.

The Slotfather summons you: get ready to talk business

Mr. Slotfather assigns a very important mission to you. You are going to manage his slot machines in the city and the rest of the gang is going to envy you terribly, they will eat their knuckles up to bones! This is a second-screen bonus round. To activate the feature you have to land 3 or more Slotfathers on any active payline.

Now you are admitted to Slotfather’s private chamber. He offers you 6 locations to place his slots and you are free to pick 3 locations to install the machines. You turned out to be a good strategist because each location generates excellent income and the Slotfather is pleased with your job. Well done! An instant prize of up to 1500 coins is paid out for each location (up to $4500 at the maximum bet).

A winner takes it all: progressive jackpot feature

As if there are not enough profitable rounds and lucrative features, there is one more – an absolute champion of the pokie, a progressive jackpot feature. It is triggered by Slotfather himself, of course, nobody else dares to attempt to hit a jackpot. Land 5 Slotfathers on any payline during a base round playing at the maximum bet, and win a progressive jackpot, with its amount being on constant display on a jackpot meter above the reels. Here is a practical tip: if you are definitely up to Slotfather’s progressive jackpot, choose to click the Max Bet control.

Bottom line on The Slotfather

This 5-reel 30-payline video slot powered by Betsoft is an excellent choice in terms of graphics, animations, soundtrack, gameplay and appealing characters. Having invested so much into the pokie, developers cared a lot about the gambling side of the thing and endowed it with a vast selection of features and bonuses. The wins are also fairly good and comprise up to $1000 in base rounds, up to $3150 during free spins, up to $1500 for Scatters and $4500 in second-screen bonus rounds. There are also two on-reel features with instant cash prizes and a progressive jackpot feature on top of all. The pokie is available for Australian players and is compatible with most iOS/Android mobile devices.