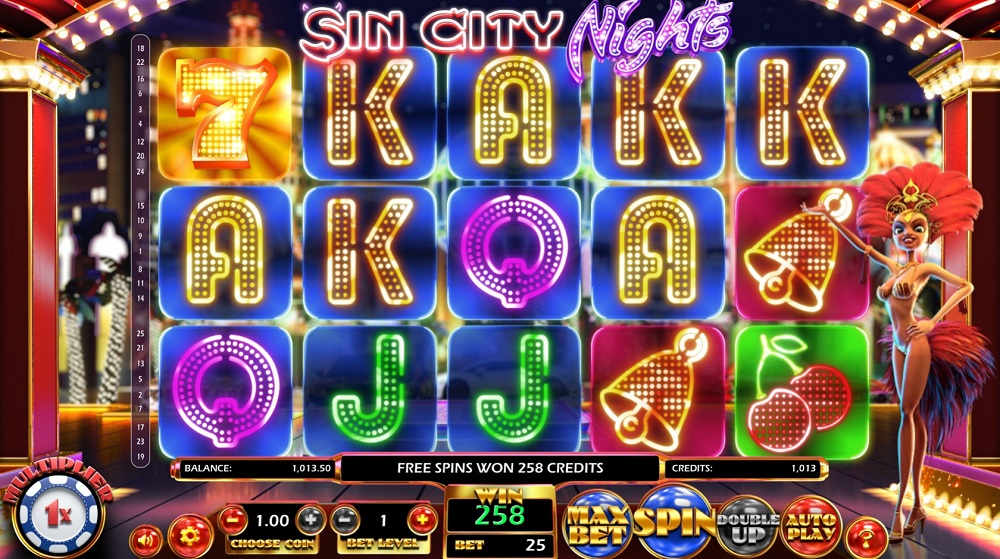 Betsoft, the pokie vendor, welcomes you to Sin City, a moniker of Las Vegas. Here millions of temptations are luring a sophisticated and new gambler. Sin City Nights is a 5-reel 25-payline pokie that is based on a popular Exploding symbols model that leads to big wins. Another great thing about Exploding Symbols is an increasing multiplier that grows from x1 to x5 in base game and from x3 to x15 during free spins. If this is not much for you, a Double Up feature is at your disposal at the end of every winning spin.

Sin City Nights is a gorgeous, vibrant and glistening game in which every element seems to radiate light. It looks like a giant advertisement or poster located in night Vegas. If you have ever been to the Strip or watched a video of it, you will be surprised with the striking resemblance of the style of the reviewed pokie and Las Vegas at night. To the right of the reels, you will see a cabaret dancer with a fantastic red headdress. Sexy and elegant, she is looking at you or at the reels. She shares your joy if you win, and she is happy when the reels produce a good win.

There are 7 regular icons, four of which are playing card values from J to A. These commonly used and notorious symbols are designed artistically and masterfully, and are pictured as if taken from a big neon sign that shines with all colors of the rainbow. The stylistic decoration of the card values also resembles letters from the legendary Welcome to Fabulous Las Vegas sign. Anyway, these are low-paying icons with the maximum award of $1000 for five of a kind. The three remaining symbols are cherries ($2500 at max), bells ($5000) and Sevens ($12,500).

The Wild symbol is depicted by a bright yellow word WILD. Along with being a substitute for other symbols, the wild has two peculiar aspects to note. First, it lands on the second, third and fourth reels only. Second, ALL symbols are substituted with a wild, including scatters. The latter feature is extremely useful because it increases the odds of your entering free spins during your game session. As you might have guessed, the limited area on which the wild can occur prevents this special symbol from creating its own winning combinations.

Exploding symbols and a multiplier trail

In most games, a new set of symbols is created as a result of rotation of the reels. In Sin City Nights, symbols behave like solid cubic objects that fall down affected by gravity. Clicking Spin makes the 15 visible symbols disappear from the screen, and then a new set of 15 symbols drops down.

The Explosion feature is not unique because it is sometimes utilized by some pokie providers other than Betsoft. The essence of the feature is easy to understand. On clicking Spin, a bet is deducted from your balance. If a winning combination is formed, the symbols that are included into this combination explode. The spaces left after the affected symbols have exploded are filled in by other symbols located above, and then a couple of new symbols fall down onto the empty positions. This first wave that comes in the wake of the explosion may create one, or more, winning combinations. And this chain of explosions continues until a subsequent drop brings no wins.

Every explosion is accompanied with the increase of a win multiplier. The initial multiplier is x1. After the first explosion, it turns to x2, then to x3 and then to x5. Having a winning combo at a multiplier of x5 means you can win up to $62,500 for five Sevens landed on a payline.

Free spins are awarded on hitting three feature symbols on the first, second and third reels. Free spins run as normal paid spins but there are two exceptions: they come at no cost for you and a multiplier trail has the advanced values from x3 to x15. The implication is that on every symbol explosion normal values specified in the paytable get multiplied by x3, x6, x9 and x15. With the highest multiplier applied, you can win a mind-blowing $12,500 x 15 = $187,500 for a combination of five 7s.

This is the final touch to the rich payouts. After any base game win, the Double Up button becomes highlighted and clickable. You are allowed to gamble the entire amount won, or a half of it. Then you are asked to choose Heads or Tails, and the pokie software will generate a result in a few seconds. If you predicted the result successfully, your gambled amount will be doubled.

This is a 5-reel 25-payline video pokie that is released by Betsoft and is themed around Las Vegas. Having glamorous and bright visual design, the pokie is equipped with the Exploding Symbols feature and a multiplier ladder of x1 to x5. In free spins, win multipliers range from x3 to x15.