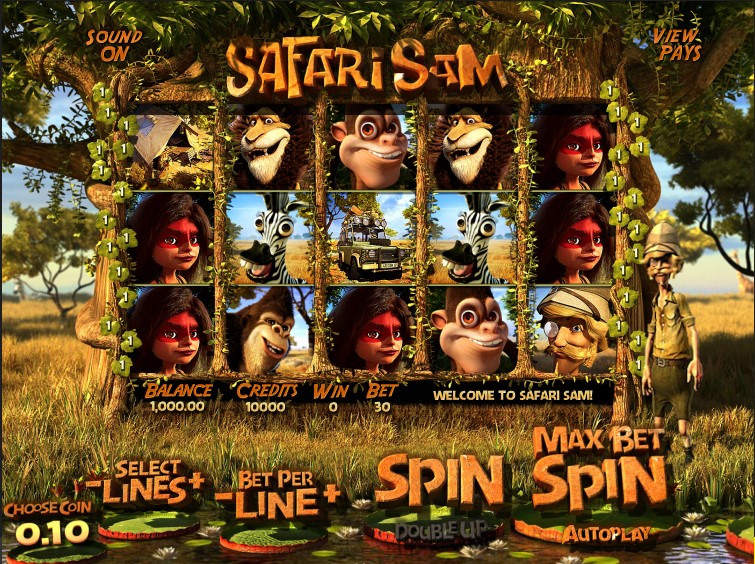 Safari Sam is a tongue in cheek video slot with 5 reels. 3 rows and 30 paylines. Taking you to the heart of Africa, the pokie offers an unforgettable safari alongside Sam, a mischievous hunter who needs your help in chasing fast African animals. The pokie has a couple of captivating features such as Stacked Collapsing Wins and Wild Animal free spins. A random wild multiplier of x2 to x10 can boost your winning chances to immense heights and pay you $25,000. If you want some diversity, watch out for scattered trees as they can land anywhere and pay up to $1500.

Having impressive 3D graphics, the pokie is fast-paced and impressive. It boasts of Betsoft’s signature animations and excellent short animated inserts that come to live on every win. Sam, your guide on the safari trip, stands near the reels and interacts with the surroundings. He looks through binoculars trying to spot an animal or tries to understand who touches his shoulder from above the tree branches. The design of the game is flawless; it transports you into the midst of the safari action and you just need to place a bet, click Spin and enjoy the winnings.

In Safari Sam, Betsoft have utilized their standard reel model based on 5 reels and 3 paylines. Winning combos are arranged in a traditional way, from left to right on payline patterns. Each payable combo that consists of non-feature symbols must be at least three-symbol long in order to award you a cash prize.

When the reels are spinning, a random multiplier wild may get overlaid on any randomly selected symbol. This wild carries a multiplier of x2, x3, x5 or x10. After the reels come to a stop, the wild will act as a substitute (if a combination occurs) and you get a win increased by the related multiplier printed on that wild symbol.

Free spins in the pokie are unusual in many ways. The first thing that captures your attention is how they are triggered. To get 10 free spins, you need to hit Gorilla, Zebra and Chimpanzee on line 1 (the top horizontal payline). These symbols may fall in any sequence. Then you are asked to pick any of the three symbols to act as wild during free spins. Then, when free spins are in progress, your selected animal will be a wild pic in addition to the wild multiplier described in the previous paragraph.

A tree provides scatter payouts. This means the combination of three or more trees need to occur in any place, not necessarily on a payline. When three trees appear anywhere, you get 450 coins. Four and five trees add 750 and 1500 coins to your balance, which is equivalent to $750 and $1500 at the maximum acceptable stake.

This is a rare feature. Even Betsoft integrates it into a very few of its pokies, no less other vendors. In some gaming situations, any of the five reels can be covered entirely by the same symbol. This event leads to two consequences: first, you get a payout equaling to a three-of-a-kind combination of these symbols. Second, the two upper symbols collapse and merge with the bottom one, thus vacating the two positions on that reel that are then filled by other symbols and the pokie calculates winning combinations created after the symbol collapse (if available). This feature gives you extra chances for real money wins.

Sam waiting in ambush and looking through binoculars is a bonus trigger, with three of them starting an eye-catching Animal Hunt bonus game. You are first asked to pick a location on the map where to travel to. Then you are prompted to pick the animals for as many times as possible. The feature ends when you select an animal and it reveals the cash amount and the word “Collect”.

Many Betsoft pokies present in online casino have a double up feature. In the reviewed creation, the double up feature takes the form of the Heads or Tails mini game. You are to predict whether the coin to be tossed by Sam, who is sitting at a bonfire, shows heads or tails. A right guess will increase your initial base game win by x2.

Safari Sam is a feature-loaded pokie with 5 reels and 30 adjustable paylines. Features include a random wild multiplier (x2 to x10), Stacked Collapsing wins, Wild Animal free spins with player’s selected wild symbol, and a second-screen bonus game. The maximum regular prize is $2500 but the numerous bonuses have a higher winning potential.