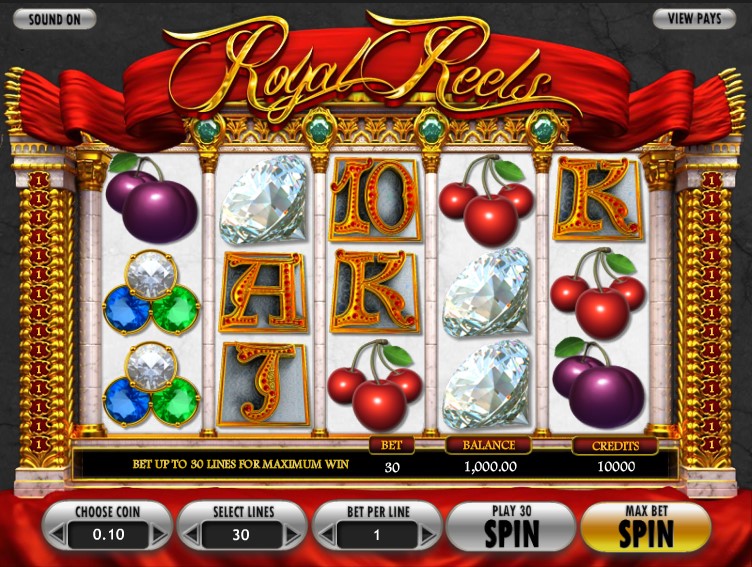 A heavy beauty and beautiful heaviness. These epithets characterize well the reviewed 5-reel pokie from Betsoft. With its theme centered around royal treasures, gems and luxury, the pokie has a couple of features, though quite ordinary as compared with other Betsoft bonuses. Royal Reels has a basic wild symbol and two bonus games. What’s interesting about the game is its extremely low-variance nature, meaning you are going to receive wins more often than not. You can also use your mobile device to plunge yourself into the game.

The overall visual design of the pokie gives the strong feeling of richness. Above the reels, there is a red banner with golden writings, the reel set stands between massive white marble columns like in classic pieces of architecture. Golden, white and red are predominant colors in the game palette. All of these create an impression of peeking into some scenes of royal life or being on a military parade marking the Queen’s birthday. There are gemstones everywhere on and around the reels.

Concerning pokie mechanics, Royal Reels has a standard 5×3 format with 15 symbols visible simultaneously. Matching symbols are considered to have formed a payable combination when 3 (or 2 in some cases) of them occupy stop positions on a payline, beginning with reel 1. The game format is pretty standard, and the same can be said about its features. Anyway, the game has some appeal and it in a way forces you to carry on spinning the reels in order to win more.

Why so? The answer may be hidden in the volatility of the pokie. In layman’s terms, the word “volatility” is used to describe the frequency of winnings and their size for any specific pokie. The higher the volatility, the less frequent but more generous the winnings are. The reviewed game, on the contrary, has very low volatility which means you are going to enjoy small wins on a frequent basis. If your coin balance in the online casino is small or you want to save it to play in other pokies, Royal Reels is an excellent choice in this regard.

The pokie has no free spins and this is a kind of shortage, compared to today. But the absence of free spins goes unnoticed because of frequently triggered bonus features.

Surprisingly, symbols in the game also include two retro pictures of cherries and plums. This is a bit unusual, given the luxurious theme. Other symbols are tens ($200 at the maximum stake), jacks ($375), queens ($500), kings ($1000) and aces ($1500). All of these are richly decorated with golden inserts and red gems, making them fit the posh atmosphere of the pokie. The fruit symbols mentioned above are low-paying symbols that award up to $100 for five of a kind.

As in many other games by Betsoft, Royal Reels has no unexpected surprises. You have three options to customize your bet size. One of them is the number of lines (1 to 30). The other two options are more reasonable to use; these include the number of coins (1 to 5) and a coin size ($0.01 to $1 in seven denominations). A total bet can thus vary between 30 cents and $150 per spin. To place the maximum stake with the selected coin size, you should click the Max Bet Spin button – everything is similar to other games from Betsoft’s suite.

A big diamond acts as a wild symbol. This useful and profitable pictures is a substitute for all normal pictures (10 to A and fruits). It is also a payable symbol but has some limitations to it. You get a reward if not less than five wilds have stopped on an active line. In this case, you will get 2500 coins ($2500 at max), which is the pokie’s highest prize.

Get three crowns on reels 1, 2 and 3 at a time to start a short bonus game. The feature is as simple as one can imagine. You will see five crowns and have to pick any one of them. You have only one try. The crown of your choice will reveal a random coin award that is then multiplied by a coin denomination that you have set for the winning spin that triggered the feature.

This feature is virtually the same as above but is played on the same game field as the reels. It is initiated when you get three symbols depicting a white, green and blue gem. You will then be asked to pick any of the three symbols to reveal a cash prize, and that’s it. Your ultimate cash reward stems from how much you have wagered in base game.

Royal Reels is a 5×3 video slot with 30 adjustable paylines. The theme of the game is royal treasures and luxury. Features include a payable wild and two pick-to-win bonus games. The maximum possible prize is $2500 and a total bet is $0.30 to $150. Online casino goers who like simple solutions with fast gameplay are going to duly appreciate Royal Reels. Mobile compatibility is good and the mobile interface of the game is intuitive and user-friendly so give a try to this splendid game on your smartphone or laptop.