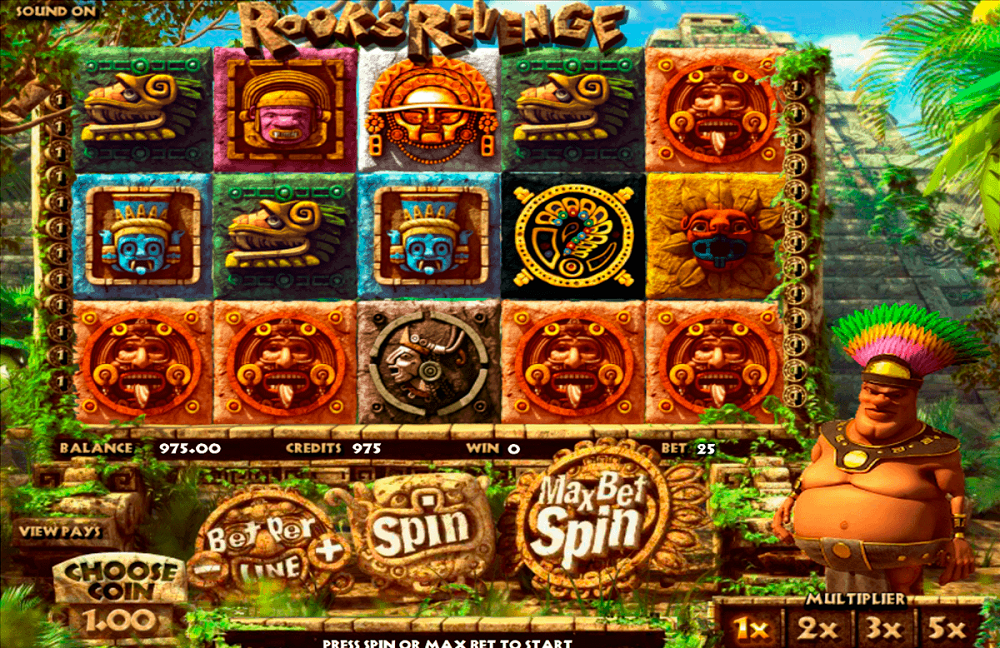 Rook’s Revenge is a 5-reel 25-payline video pokie based on the Explosion Symbols mechanics. Increasing multipliers are the key feature in the game that leads to big wins, which are especially impressive during free spins. If you are lucky, the maximum multiplier reaches an astonishing x 15. If this multiplier applies to the maximum prize, it can run to $187,500. Another stunning addition to the gameplay is an extremely useful wild symbol that can substitute for all pics, including scatters. Rook’s Revenge is a wonderful choice for both low-rollers and those who are used to place bigger stakes.

Rook’s Revenge is set on the territory of America inhabited by the grandeur Aztec civilization around 5 or 6 centuries ago. The reel set is installed in front of a tall Aztec pyramid, among lush trees and stone structures. A tribe chief will be your loyal companion for the game – he always stands to the right of the reels and shows you what to do, waves his hands and jumps with excitement when you get a win. The game model has done away with spinning. Instead, symbols fall from above the reels like big stone blocks.

The symbols have a remarkable ancient motif. They are designed as square tiles with a distinctive pattern or picture carved or painted on it. The lowest-paying tile ($250 at max) depicts a warrior’s head. Further up there is a yellow tile displaying a deity or something like that ($375). The remaining pictures are made using the same folk motifs, and the highest-paying tile is of red color and it shows some unidentifiable thing, maybe, a deity again or a stylistic representation of a chief. This highest-paying symbol awards $12,500 for five of a kind. Non-feature symbols grant you a reward when at least three of the same occur on any active payline. There are a few feature pictures and they are governed by other rules to be reviewed below.

The 25 paylines are always activated and you cannot decrease their number. You have two adjustable settings to tailor a bet size to your preferences and habits. These are the number of coins per line (1 to 5) and a coin value ($0.01 to $1). Therefore, you can place almost anywhere between 30 cents and $125 per spin.

The Exploding Symbols feature is not rare today yet it has not become a trend unlike, for example, wild symbols. This feature actually extends your initial paid spin giving you two, three and even more free continuations of the initial spin. This concept may look a bit tricky for an unsophisticated gambler but you will not face any problem dealing with it – it is as simple as pie.

On clicking Spin or Max Bet Spin, the visible symbols fall below the bottom edge of the screen and a new set of tiles avalanche from above. If a winning combination has been created, the symbols that make part of that combination literally explode and disappear. The empty positions formed as a result of symbol explosions are filled in by symbols above. If this second avalanche has led to new combinations, the involved symbols explode and cause the third avalanche to fall down. During all the repeated process, after each avalanche, combos are evaluated and get paid.

And here another stunning feature known as Cumulative multipliers come to life. At the bottom right corner, there are four values shown in a row: x1, x2, x3 and x5. Each spin begins at x1 and after each subsequent explosion and avalanche, a multiplier increases stepwise, going to x2, then to x3 and finally to x5. This means that each following combination will be more expensive than the preceding one. If the latest in the series of avalanches brings no win, the increased multiplier resets to x1, and the next paid spin starts at x1, as usual.

A round yellow sign with a question mark inside is a wild symbol. It has both advantages and drawbacks. As a normal wild, the question mark sign acts as a replacement and this is a truly mighty symbol because it replaces even a scatter, which is of rare occurrence in other pokies. As for the wild’s drawback, it lands on the second, third and fourth reels only, thus it cannot create combos by itself.

The second feature symbol, in addition to the wild, is a scatter golden mask. It also has a limited positional capability because it falls on reels 1, 2 and 3 only. Once all the three scatters appear in view, you are granted 10 free spins preceded by short, five-second animations. In Rook’s Revenge, free spins are not a mere free version of paid spins because they come with an extra profitable feature. As is said above, the base gameplay has a multiplier row of x1 to x5 that activate through a sequence of explosions. The same is true for free spins but here multipliers are much bigger. A default multiplier is x3, then it increases to x6 on the first avalanche, then it goes to x9 on the second avalanche and then reaches x15.

Rook’s Revenge is a visually enticing 5-reel 25-payline pokie based on the famous Symbol Explosions format. It has a wild, free spins and mounting multipliers from x1 to x5 in base game and x3 to x15 in free spins. Recommended to everyone who likes unique gaming solutions.