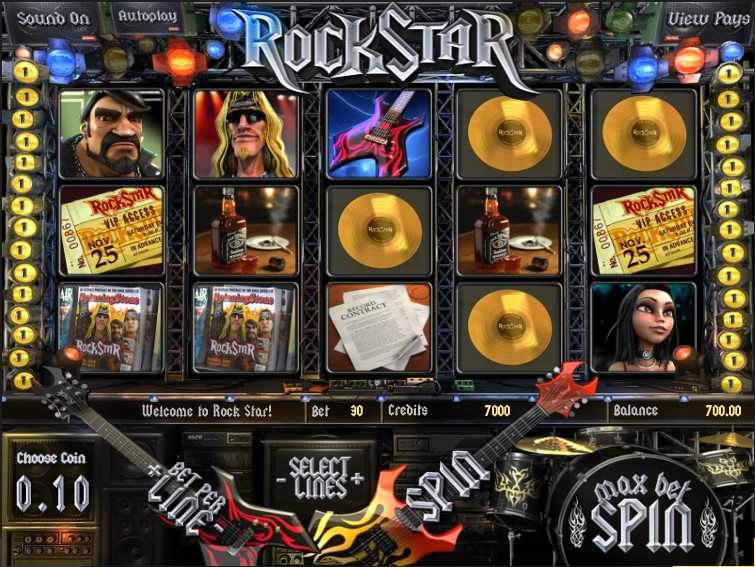 Rock Star is a high-quality 3D video slot from Betsoft, and as one can judge by the title, it is devoted to rock music. Every smallest element in the game resonates with heavy music and makes you feel as if visiting a live concert of a world-famous rock band. Apart from excellent graphics, the pokie has a couple of enticing features that add variety to gameplay. These include two wild multipliers (x10 max), an Epic Solo instant cash bonus and Are You Ready To Rock? bonus feature.

Make sure your headphones are on your head before loading the pokie. When loaded, the game is accompanied with heavy rock soundtracks that change to other heavy sounds when hitting a win. Visuals and audio are perhaps the most impressive part of this 5-reel 30-payline pokie. The entire reel field is surrounded by stage structures and colorful lights. The fonts used in button writings and inside the paytable imitate the style of some heavy metal fonts like the Australian-born AC/DC. Under the reels, there is a casual set of buttons for bet adjustment but they are designed to fit the theme, for example, the Bet Per Line button is made as an electric guitar. When a big win is paid out, you will be struck with long-lasting animations that accompany the win: The full five-piece band go onto the screen with their musical instruments and begin performance, while golden sparks rain down celebrating your victory.

In other aspects, Betsoft use a traditional model of counting combinations. The player is considered to have won when three, or greater, matching symbols are arranged on an active payline, beginning from reel 1. Sure, there are a few feature symbols that do not follow this rule.

A bet size is set by using three settings:

Low-rollers can place as low as 30 cents per spin and have all lines in play. Other players can put up to $150 at stake on each round. And now, a few words on pokie variance. As one can see, the maximum win ($500) is only 3.3 times as high as the maximum bet. This speaks volumes for the low-variance nature of Rock Star. Wins on almost every round are what you can expect to see in this pokie. You will not hit big dollar amounts but your coin balance will last for a long time, enabling you to enjoy the pokie for many hours ahead.

The pokie has two wild symbols, a golden and platinum record. Not only the wilds substitute in combinations but they also have a multiplication effect. A gold record increases payouts by x2, while a platinum record multiplies a normal win by x5. If both land in a combination, they have a synergistic effect, meaning you get x10 times higher than the paytable reads for that particular combination. Suppose you get three high-paying band members plus two different records. This leads to a $5000 payout if you play at max.

This is a simple pick-to-win bonus that pays out immediately as soon as you collect items. To proceed to the feature, three guitars are needed in any position on the reels. You are then asked to pick symbols, which would reveal instant cash. The feature keeps on running until the word “Collect” shows up, at which point the feature ends and you go back to base game with all bonus wins collected.

Are you ready to rock?

This is the most impressive and alluring feature in the pokie but you will have to make dozens of futile spins before it is triggered. To get started, three Tickets need to land on an active payline (note that tickets are not scatters).

The feature is unlike what you have seen in many other games. On a new screen, you first read short instructions of what you should do. Then you will see three lanes, along which squares of three different colors run quickly in your direction. The game has a time limit and requires quick reaction because your task is to click on the colored squares before they reach their finish points. Each successful hit adds points which are then tallied at the end of the feature and transform into real-money wins.

Rock Star is a Betsoft’s pokie with 5 reels and 30 adjustable paylines. Being a low-variance game, the pokie has three features: two different wild multipliers up to x10, an instant bonus and a unique second-screen round with high cash rewards. The game caters for all music fans and those who like in-game features. The maximum potential prize in base game is $5000 but bonus features provide wider winning possibilities.