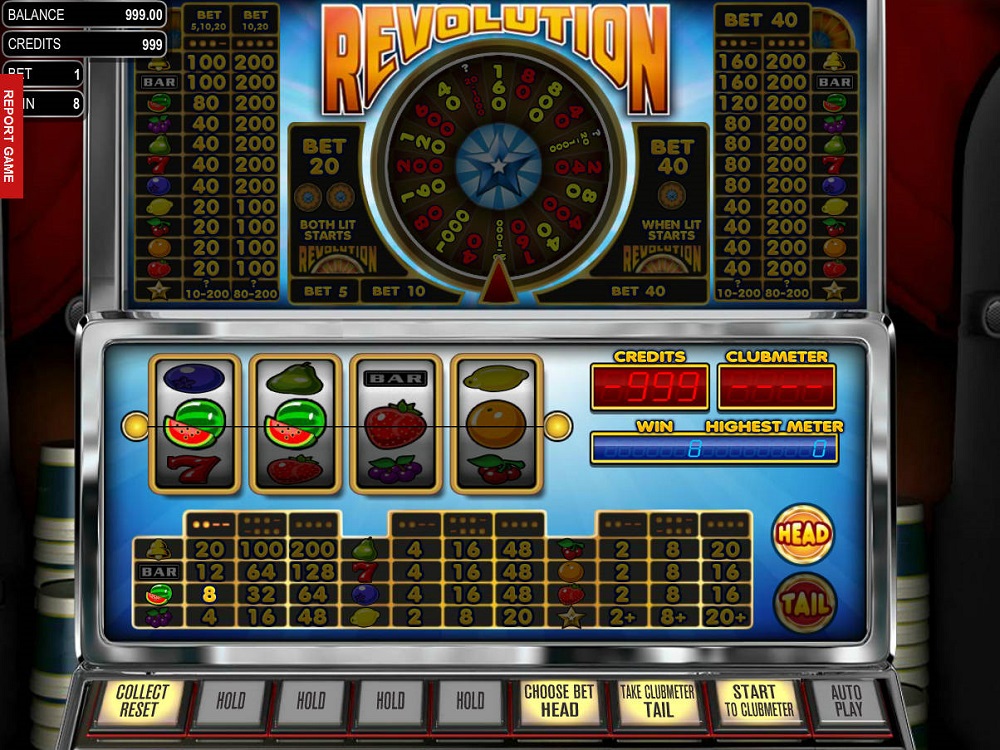 Revolution is a classic 4-reel 1-payline slot that brings fun and excitement to fans of retro slot machines. It is stuffed with fruit symbols and offers a fantastically rich retro gameplay with tons of wins. Its centerpiece though is a legendary wheel of fortune that rotates with flashing lights and electronic sounds to deliver you an ultimate prize of 1000 coins. Revolution is a perfect slot for many aficionados of three-reel machines.

At first glance, the pokie looks chaotic, with dozens of symbols, an XL paytable, a long array of buttons and a big circle on top, divided into sections. But it becomes clear at once that Revolution is a classic game because all the symbols are old-fashioned fruits, bars and sevens. The most important thing you should know is that the pokie has a single payline that is clearly marked with a black line going across the center of the reels.

There are three possible ways of how matching symbols are able to form a payable combination: two symbols on reels 1 and 2, three adjacent symbols in any position on the payline, and four matching symbols that cover the entire payline.

There is a Hold button under each of the four reels. This is a familiar feature, which is sometimes used in three-reel machines. After a paid spin, a certain number of identical symbols may stop on the payline but one or two symbols may lack for a winning combination. If this occurs, the player is entitled to click on a Hold button to fix the preferred reel in place, while the remaining reels respin once. When they stop, you can obtain a winning combo. This is a very useful and helpful option that the player can utilize free of charge after any spin.

When you receive a cash win, the money you have earned are automatically transferred to the Clubmeter indicator. From now on, you will play at an advanced level of payouts, which are shown at the upper part of the screen above the reels. Here the awards are two or three times as high as normal and you can win 100 or 200 coins for each combination of four identical symbols. When money on the Clubmeter indicator is expended, you return to the base game mode.

The bonus activates when one or two small wheel icons land in any position. If you bet 40 coins per spin, then only one wheel icon is needed to get the feature started. The wheel of fortune above the reels then lights up and activates. It will rotate for a few seconds and then stop, indicating your award. The wedges on the wheel have various money awards, from 40 to 1000 coins. This is the most profitable bonus in Revolution because it can win you up to $5000 at the maximum stake.

Any winning spin may be more fruitful if you dare play heads or tails. Click a related button if you want to double up your winnings in the base game. In case of a right guess, you will increase your latest win by x2.

Revolution is an astounding classic game with 12 regular symbols. The pokie features 1 payline and 4 reels, which is an unusual game format by today’s standards. During the game, you can use Hold buttons and gain access to the Wheel of Fortune feature that awards the maximum of 1000 coins. Finally, there is a Double Up feature for the ultimate online casino experience.