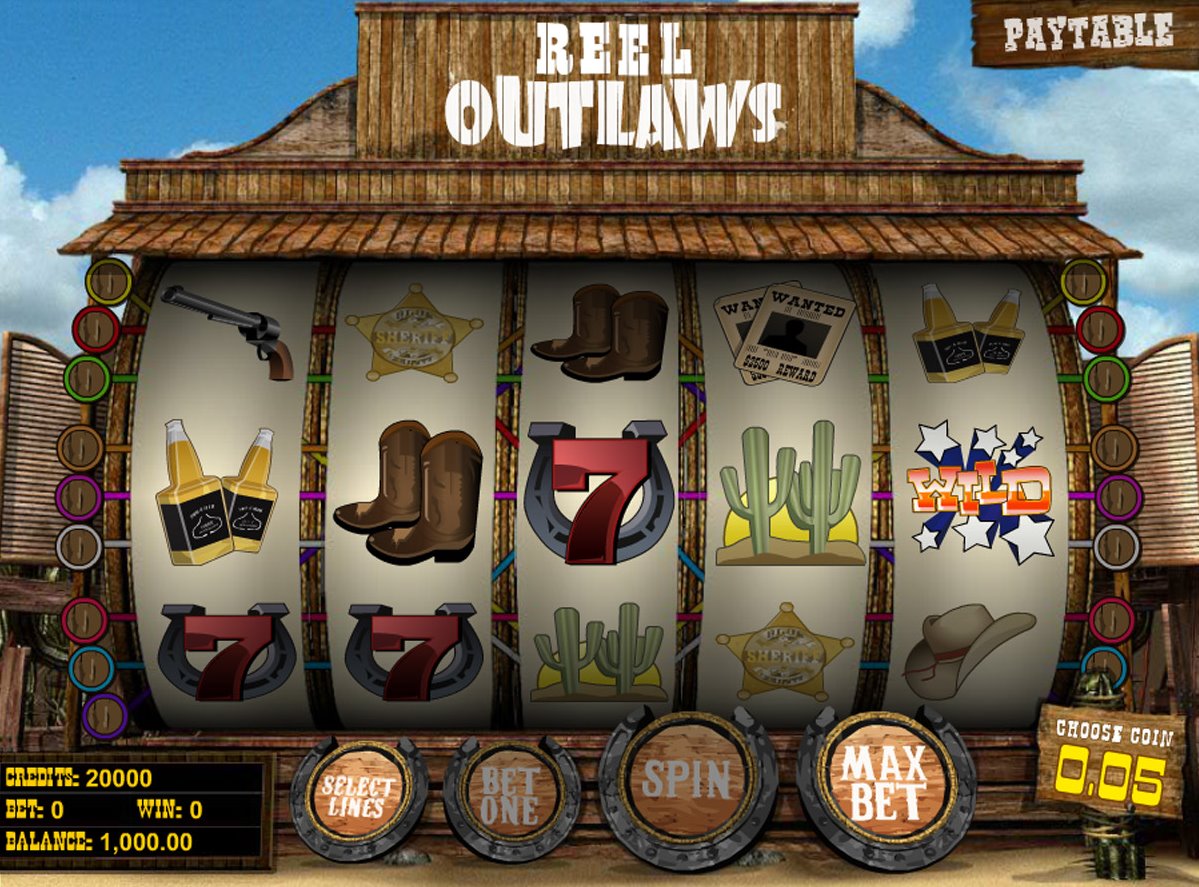 Reel Outlaws is a Wild West themed video pokie with 5 reels and 9 paylines. Having vigorous gameplay, plain 2D design and a package of thematic symbols, the pokie gives you some energetic online casino experience with revolver shots, crazy cowboys and smoke-filled saloons. Wild symbols will help you get lots of money and ultimately receive the pokie’s highest jackpot of $10,000. You can also expect to enter a bonus feature where you are going to have a shooting practice with whiskey bottles. Reel Outlaws is focused on low-rollers so if you have a limited bankroll, you are welcome to give this pokie a spin.

The five reels are positioned in front of an old wooden saloon somewhere in the Wild West. Graphical design looks somewhat dated, unlike many other Betsoft pokies but this is because Reel Outlaws is one of the first creations ever released by this pokie maker. The configuration of the reels is a standard 5×3 field with 15 symbols visible simultaneously. Players are going to experience the solid medium-volatile game with not so frequent winnings. But you should keep in mind that cash prizes depend on your total bet – the higher your bet, the healthier your rewards for payline combinations.

All the pictures integrated into the game belong to the Wild West theme. There are no infamous playing cards or other stuff like that – everything is as close to the American Old West as possible. The symbols are characterized by medium-sized payouts. Sure, there are some low rewards but basically, the paytable is impressive. Let’s look at the regular symbols and their related prizes: Seven and Horseshoe ($1250 at max), a pair of cactuses ($1250), whiskey bottles ($1500), a cowboy’s hat ($1500), a pair of cowboy boots ($2000), a revolver ($2500), a sheriff’s badge ($3750), a Wanted poster ($3750) and a bull skull ($5000). All symbols, save for the two lowest, create payable combinations when two of the same appear on a payline left to right.

A bet size is changed by using three buttons under the game board. One of the buttons selects the number of active lines (1 to 9). Another button sets a coin denomination between $0.01 and $1, and the third button Bet One puts 1 to 5 coins per line. That said, a total spin bet can range between $0.09 and $45. As an option, you may click Max Bet to spin the reels at the maximum number of coins of your selected value.

The wild symbol is designed with American flag motifs, featuring the red word “Wild” and blue stars. The wild symbol performs two important functions: first, it acts as a replacement for all regular pictures; second, it is the most profitable symbol in the game, since 2 to 5 of them assembled in a proper order award up to $10,000. Wild symbols have no built-in multipliers to be applied to normal winning values; however, the role of wild symbols can hardly be overestimated because they help you get winnings in actually no-win situations.

Reel Outlaws has another special symbol that is known as a scatter. Scatters differ from normal symbols in that they count in any place. Whether three, four or five scatters, which are represented by dynamite sticks, stop in absolutely any position, you get a win equal to 25, 250 or 2500 coins, respectively. If you have made up your mind to play at the maximum possible stake, you will grab $2500 for five scatters on the screen. Unfortunately though, scatters fail to trigger any bonus events, unlike they do in many other pokies.

There is a simple bonus feature that opens on a new screen. Being one of the first games by Betsoft, the pokie lacks sophistication and exquisiteness of more recent games by that provider, and the described bonus feature befits the entire style of Reel Outlaws. To enter the feature, you need to hit 3 or more game logos. Before you proceed to a new screen, the pokie awards you an instant prize of x5 or x10 times the total bet if you landed four or five of these feature symbols (three scatters do not pay out).

When the feature starts, you will find yourself at the shooting range. In front of you, there are six whiskey bottles. You are prompted to shoot the bottles and pick your bonus winnings, which are awarded at random. Every time you click on a bottle, it flies into pieces and shows the bonus cash. The feature continues until a bottle of your choice reveals a money prize and the word “Collect”. At this point all winnings are tallied and you are returned to the base game. The feature normally ends up with your earning hundreds of coins.

Reel Outlaws is a 5-reel 9-payline pokie that takes you to the Wild West. Having a normal 5×3 design, the game offers you a payable wild symbol, scatter symbols and a second-screen bonus where you are to shoot at full whiskey bottles. The maximum prize in the video slot is $10,000, while a bet varies between 9 cents and 45 dollars per spin. The game is made compatible with major mobile devices. No free spins are available.