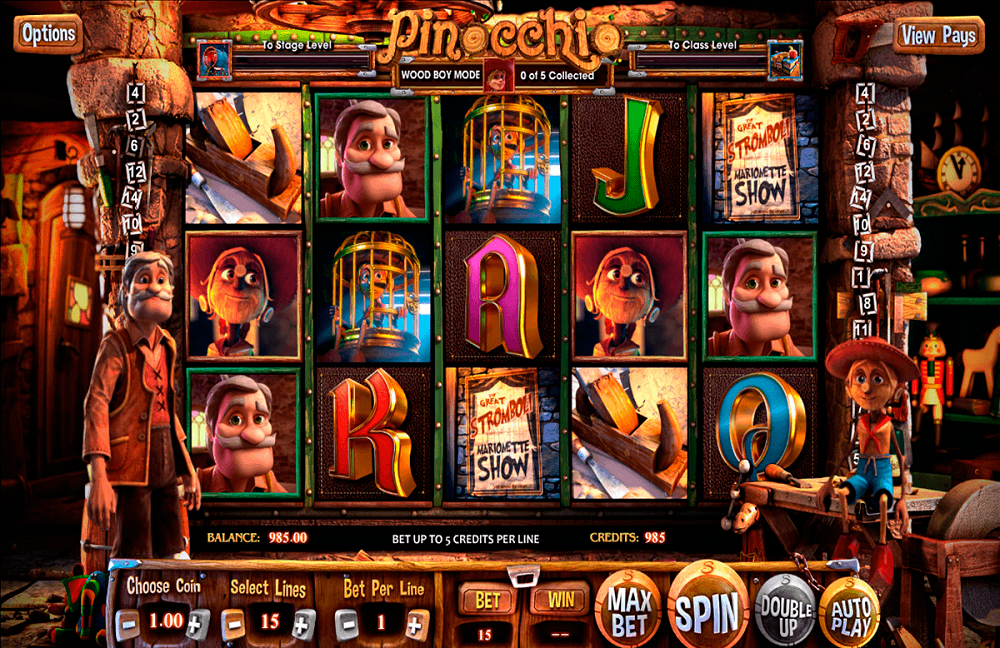 This marvelous 5-reel 15-payline pokie is inspired by a Carlo Collodi’s story about an old carpenter who carved a puppet from a piece of wood, and one fine day the puppet wanted to become a real boy. As is usual for Betsoft, the game has lots of features and the most impressive are the Secondary Worlds that take you to a classroom or a makeshift stage. They have a unique gameplay with respins, sticky wild reels and much more. The game is so exciting that it will keep you busy for hours because features emerge almost every moment when the reels are still spinning or immediately after they stop.

This outstanding game will bring back your childhood memories because it portrays one of the most splendid fairy tales that children all over the world have enjoyed since the end of the 19th century. You will have an enticing gaming experience since every symbol will remind you of the craftsman Geppetto and a wooden puppet who dreamt of becoming a boy. And most importantly, this magical storyline is accompanied by numerous extraordinary features with compelling rewards.

Bet sizes offered in the pokie make it a perfect choice for low-rollers because the minimum bet is as low as $0.15. By configuring the number of coins per line and a coin denomination, you can place a bet all the way up to the maximum of $75 per spin.

You begin the game at a workshop where the carpenter Geppetto made a boy out of wood. You will see the boy sitting on the table to the right of the reels, and his “father” standing on the opposite side, both well animated and a kind of interacting with what is going on around them on the reels. Non-feature symbols include playing card values 10 to Ace (up to $500 at max), a cuckoo clock ($750), a carpenter’s plane ($750), The Great Stromboli Marionette Show poster ($1000), a cage with Pinocchio inside ($1000) and Pinocchio himself ($2500). As per usual with Betsoft pokies, matching symbols need to land left to right to pay you a reward.

It sometimes happens that you are just one step away from hitting a 5x combination but only one symbol is missing. The pokie gives you the second chance to make a win. When a missing symbol should have stopped on reels 1, 2 or 3 to create a five-of-a-kind, your fairy companion will respin that reel once, giving you one more chance to hit it big. There is no guarantee the needed picture would appear but it actually might appear and lead to decent wins.

Geppetto is a scatter and it lands on the first, third and fifth reels only. When he occurs on the central reel, the Wild Scroll feature is activated. Geppetto will transform into a wild scroll symbol and it will then move across the reels to the left, giving you a respin every time it moves. Respins are absolutely free and can bring you new winning combinations.

The game begins at Geppetto’s workshop. With every spin, two feature symbols Wagon and Textbooks may appear on reels 3 and 5. Each of these symbols adds to a related fill meter and you need to collect 10 wagons or textbooks to get transported to the other world.

Once the Stage Level meter is complete, the surroundings will change slowly to show Pinocchio approaching and entering a wagon. Inside the wagon, you will see the 5×3 reel field with the same symbols and a new feature added to the game. You are awarded 8 free spins, during which a wagon symbol landing on the central reel will morph the entire reel into wild, become sticky and give you 5 free respins. When the feature expires, you are returned to the Workshop stage.

After you have collected 10 textbooks, you are taken the Classroom world. You will see here the same 5×3 field and the same set of symbols but there is a feature added to this game mode. As soon as you are at the classroom, you are awarded 8 free spins. Every time textbooks land on reels 1, 3 and 5, they transform into a wild scroll and shift down the reel, giving you a free respin with every move. What’s more, you can hit two or three wild scrolls at the same time, and this would ultimately lead to very big wins. When 8 free spins are over, you come back to Geppetto’s workshop and continue the base game.

Pinocchio came to life as a piece of wood but he had an aspiration of becoming a real human being. The pokie actually follows this metamorphosis by providing two game modes. At the beginning of your game session, you play in the Wood Boy mode and everything described above refers to it. Recall that Pinocchio is a high-paying regular symbol and he sometimes appears with a small icon depicting a boy’s face attached to the corner. When this occurs, the boy’s face picture adds to a special meter, and you need to collect a total of 5 of these symbols to unlock the Real Boy mode.

When this occurs, a mysterious force will lift Pinocchio up in the air and turn him into a human. From then onward, the game will run in a Real Boy mode that has one single difference from the Wood Boy mode, which lies in the fact that all Pinocchio symbols will act as wild. All the other features will also be effective in the Real Boy mode.

Pinocchio is a 5-reel 15-payline video pokie, which is inspired by a fabulous story by Carlo Collodi. The game has two normal modes and two bonus modes with 8 free spins each. Besides, you can win stacked wild reels, a fairy feature and a wild scroll feature with respins. The max reward in the pokie is $2500 at max.